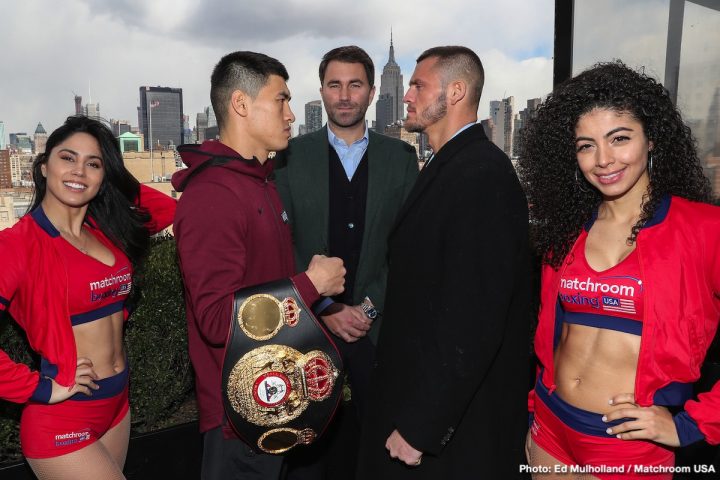 By Eric Thomas: Joe Smith Jr. (24-2, 20 KOs) is ready to do the impossible by looking to defeat WBA World light heavyweight champion Dmitry Bivol (15-0, 11 KOs) this Saturday night on DAZN at the Turning Stone Resort & Casino in, Verona. Smith Jr. has arguably a puncher’s chance of winning this fight. He’s not expected to be able to match the talented Russian fighter on skills.

The longer the fight goes, the more likely Bivol, 27, will run away with it to win a one-sided decision. It’s on Smith Jr. to try and get to Bivol’s chin in the first six to seven rounds. If Smith Jr. can score a knockout in the first half of the contest, his chances of winning will dropping off dramatically as the rounds pass.

Smith Jr., 29, understands what he’s up against in facing a very good fighter in the highly talented Bivol, but he still believes he’ll find a way to send him down to his first career defeat in this fight. On paper, it doesn’t look good for Smith. Bivol beat a guy that he lost to recently in Sullivan Barrera, and he did it without too many hiccups last year in March in stopping him in the 12th round. Barrera beat Smith Jr. by a 10 round unanimous decision in 2017.

Bivol will be making his fifth defense of his WBA crown, and he’s hoping to look impressive in winning.

“This is what every fighter dreams of – a shot at a world title and this is my shot,” Smith Jr. said. “The work has been put in over the years and I’m going to put it all together this Saturday and give you a great show and become the next champion and I’m going to go home with the belt.”

Smith, who comes from Long Island, New York, has wins over the hard hitting Andrzej Fonfara of Poland, Bernard Hopkins and Will Rosinsky. Those are the guys that most notable on Smith’s 10-year record. The reality is, Smith Jr. only started getting noticed recently when he blitzed Fonfara by a first round knockout in June 2016. Before that fight, Smith Jr. wasn’t being talked by the hardcore boxing fans, and certainly not at all by the casual fans. Smith hasn’t fully taken advantage of his big win over Fonfara unfortunately, fighting only three times since then. Smith beat 50-year-old Bernard Hopkins in December 2016 by an eighth round stoppage to send him into retirement, and then lost to Sullivan Barrera by a 10 round decision in July 2017. After staying out of the ring for 11 months, Smith Jr. returned last June to stop Melvin Russell Jr. (11-5-2, 7 KOs) by a first round knockout. That was the only fight for Smith Jr. in 2018. His management didn’t put him in a fight in the second half of the year. It would have been good for Smith for him to return to the ring at least November or December for a fight, since he clearly didn’t take any punishment in making quick work of Russell Jr. in stopping him in the 1st round last June. That’s the problem that is holding Smith’s career back. He’s not been active enough for him to keep his name up there with the other fighters in the 175 lb weight division. That might be a good thing though. For all we know, Smith Jr. would fall apart if he’d fought the likes of Marcus Browne, Artur Beterbiev, Oleksander Gvozdyk, Sergey Kovalev, Anthony Yarde, Badou Jack, Eleider Alvarez, and Bivol. By not fighting those guys already, you can argue that Smith has kept avoiding seeing his career tank. We can’t know how Smith would do against those types of fighters. The only thing you can go on is how he fell apart against a mid-level contender in Barrera, 37, when he fought him almost two years ago in 2017. The way that Bivol handled Barrera in comparison to Smith Jr. suggests that we could be seeing a one-sided fight on Saturday night. Smith Jr. will have that knockout potential if he lands a big one like he did against Fonfara and Hopkins, but Bivol is in his prime, and has few holes in his game. A prime Hopkins would have been a real problem for Smith Jr. to deal with. It’s very likely Smith would have lost to him. But he did a good job of destroying Fonfara in the first round when the Polish fighter made the mistake of exchanging bombs with him in the opening moments of the fight. Fonfara couldn’t recover after the first knockdown, and he was quickly dropped again and stopped.

“He has good power but it is not his best quality – he has good speed and good combinations,” Bivol said of Joe Smith Jr. “I have watched many of Joe’s fights and he has good power. He tries to push his opponents to the ropes and beat them there…I think Joe will move forward a lot and use his jab a lot and try to land his right hand,” Bivol said.

Bivol predicts that Smith Jr. will try to push him to the ropes, and unload on him there with big shots to go for a knockout. That’s what Smith did in stopping Hopkins in the 8th round in 2016. Hopkins might have underestimated how dangerous Smith is when he traps an opponent against the ropes. A trapped Hopkins took some heavy shots and slipped out of the ring, falling into his right shoulder on the concrete floor.

It could have happened to anybody if they had fallen out of the ring like Hopkins did. The injury prevented Hopkins from returning to the ring to resume the fight. Smith Jr. was ahead on two of the scorecards at the time of the stoppage, and he appeared to be taking over the fight with his punching power and aggression. Bivol isn’t going to let Smith back up against the ropes the way that he did with Hopkins. That’s simply not going to happen on Saturday. If Smith Jr. is going to beat Bivol, he’ll need to do it in the center of the ring, which is where he knocked Fonfara three years ago. Smith Jr. is very dangerous no matter what part of the ring he’s at, but he’s more lethal when he has his opponents trapped against the ropes and unable to get away from him.

It’ll be big upset if Smith defeats Bivol. There are a lot of people that already believe Bivol is the best fighter in the light heavyweight division despite him not having beaten any of the super talented championship level fighters. Bivol’s reputation has been built on wins over Barrera, Jean Pascal, Isaac Chilemba, Cedric Agnew, Robert Berridge, Samuel Clarkson, and Felix Valera. Pascal gave Bivol problems in losing to him recently by a 12 round unanimous decision last November. Bivol’s win over Pascal wasn’t nearly as impressive as Sergey Kovalev’s two knockout victories. Kovalev completely overpowered Pascal in beating him twice. In contrast, Bivol struggled at times in boxing his way to a 12 round unanimous decision. The fight showed that Bivol isn’t as quite as good as many fans believe him to be. However, Pascal is a skilled fighter, and if you don’t knock him out, you’re going to have problems with his hand speed, power and his technical ability.

Bivol will likely out-box Smith Jr. win a fairly one-sided 12 round decision. A knockout victory would be impressive for Bivol, but it’s unlikely. Bivol’s not a big puncher, and he tends to fade in the second half of his fights.

“How old was Bernard? I really respect Bernard Hopkins but he wasn’t in his best shape when he fought against Joe Smith,” Bivol said in commenting on Smith’s knockout win over Hopkins three years ago. “I watched a lot of Bernard Hopkins’ fights and I learned a lot from him.”