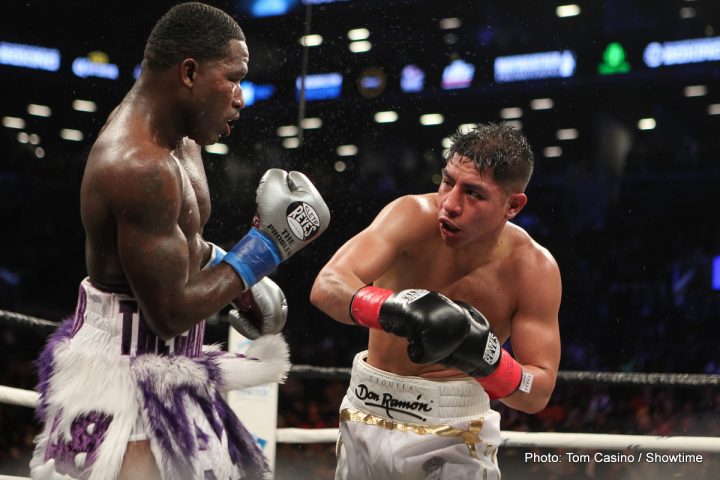 By Dan Ambrose: Jessie Vargas (28-2-2, 10 KOs) will likely be back inside the ring next month to face former two division world champion Humberto ‘La Zorrita’ Soto (69-9-2, 37 KOs) in a catch-weight fight at junior middleweight on April 26 in Los Angeles, California, according to Matchroom Boxing promoter Eddie Hearn.

Soto made Brandon Rios look bad in beating him recently. That was 12 rounds of schooling. However, Vargas is bigger than Rios, faster, and still in his prime. There’s a good chance that Vargas beats Soto on size and youth. It’s poor match-making though for Hearn looking to put a older fighter like Soto, who has spent of his career at super featherweight and lightweight in with Vargas at a catch-weight at junior middleweight.

The last true loss for Soto was in 2012 in getting stopped in the fifth round by Lucas Matthysse. In 2015, Soto lost a controversial decision to Antonio Orozco. It was a horrible decision. Soto’s win over a past his prime Rios doesn’t mean that Vargas should be fighting him to get a crack at a world title. Soto isn’t a top 147 pound fighter or definitely not a 154 contender. He’s an older fighter, who was a superb former world champion at 130 and 135 many years ago. But for Vargas to fight him now at at junior middleweight, it’s a bad look, and match-making at it’s worst.

This move by Hearn is likely being done because Soto beat Matchroom fighter Brandon ‘Bam Bam’ Rios (35-5-1, 26 KOs) last month on February 23 in a big upset at the Auditorio Municipal, in Tijuana. Mexico. Soto, 38, was an underdog in that fight, and surprised a lot of boxing fans in easily beating Rios by the scores 119-111, 118-112 and 118-112. Some fans believe Hearn was planning on matching Rios against Vargas if he’d beaten Soto. But after Soto pulled off the upset, Hearn has changed his plans by having him take on Vargas instead at junior middleweight.

It’s another big risk on Hearn’s part, because Soto is a much better fighter with a lot more talent and experience than Vargas, who was beaten virtually no one during his career other than Sadam Ali. Apart from that fight, Vargas lost to Manny Pacquiao by a one-sided 12 round unanimous decision in 2016, and he has two 12 round draws against Adrien Broner and Thomas Dulorme. Vargas has controversial wins over Khabib Allakhverdiev and Anton Novikov in 2014.

Hearn promotes Vargas, who has won world titles in the past at 140 and 147. Hearn wants to build the 29-year-old Vargas up with a win over 38-year-old Soto first in a catch-fight at 151 or 152 pounds before putting him in for a title shot against unbeaten World Boxing Organization junior middleweight champion Jaime Munguia (32-0, 26 KOs).

Hearn doesn’t say why he’s choosing Soto as an opponent to get Vargas ready for a fight against the big punching 22-year-old Munguia, who reportedly hydrates to as high as 175 pounds for his fights at junior middleweight. Soto has spent much of his 22-year pro career at featherweight and super featherweight. Choosing Soto as an opponent for Vargas at junior middleweight is similar to what Mikey Garcia is about to do in moving up to fight 147 to challenge IBF welterweight champion Errol Spence Jr. on March 16 at AT&T Stadium in Arlington, Texas.

“That’s the fight. I think Munguia is a great fight for Jessie Vargas,” Matchroom Boxing promoter Eddie Hearn said to AB Boxing News. “I think it’s likely you’ll see him [Vargas] fight Humberto Soto at a catch-weight in his next fight in LA, which could be a good fight.”

Munguia would be a potentially bad fight for Vargas, who failed to beat Thomas Dulorme in his last fight in fighting to a 12 round draw last October. Before that, Vargas fought to a 12 round draw against Adrien Broner last April. Vargas’s last win was against journeyman Aarron Herrera in 2017.

Vargas has done very little since his win over Sadam Ali in 2016. That was Vargas’ last big win if you want to call it that. Since that fight, Vargas has lost to Pacquiao, taken a year off from boxing, beaten Herrera, and fought to two 12 round draws against Dulorme and Broner.

“He’s coming off of a good win over Brandon Rios,” Hearn said about Soto. “Maybe at 151, 152 pounds, and then move up [to 154 lbs],” Hearn said about Vargas. “I like the Liam Smith fight. I like the Kell Brook fight. So, all of those fights are available to him. But he’s got his eyes on Jaime Munguia for sure, and that could be a really big fight for sure,” Hearn said.

Vargas is going to be too small for Munguia if he gets that fight. What’ll be interesting is how Vargas will be given a world shot against Munguia over all the top contenders that have been waiting for a crack at a world title in the WBO’s top rankings at 154. Instead one of them getting a title fight against Munguia, Vargas would be getting the fight based on a win over non-junior middleweight in 38-year-old Soto.

Using Soto as an opponent to get a title shot against Munguia comes across as strange. If Vargas wants to fight for a world title at junior middleweight, he should at least fght one of the top contenders in the WBO’s rankings at 154. Hearn mentions wanting to match Vargas against Liam Smith or Kell Brook. Those are the fighter that Vargas should be fighting for him to get a title shot against Munguia, not Soto.

Vargas and Kell Brook were in negotiations for a fight on the 26th of April at junior middleweight, but the two weren’t able to work a deal out. Hearn says that Brook (38-2, 26 kOs) is just going to wait for Amir Khan (33-4, 20 KOs) to get done with his fight next month against WBO welterweight champion Terence Crawford so that he can fight him. The perception there is Brook didn’t want to take a risky fight against Vargas and potentially blow his fight with Khan. Crawford is expected to beat Khan, so he would be coming off of a loss when he faces Brook. It could be that Brook didn’t feel confident that Khan would still be interested in fighting him if he were to lose to Vargas.

Munguia struggled in his last fight in beating Takeshi Inoue by a 12 round unanimous decision last January. That fight sent warning signals out that Munguia needs to be matched carefully from here on out at 154. If Golden Boy Promotions makes the mistake of putting Munguia in with someone a little good good, he’ll lose. Vargas doesn’t fit the category of being too good for Munguia, fortunately for Golden Boy, so that’s a fight that will likely get made, as long as he gets past Soto. It won’t be surprising if Soto beats Vargas though. Hopefully there’s no controversy like we saw with the Orozco vs. Soto fight where the A-side guy got a win that he clearly didn’t deserve.