GGG expected to finalize with DAZN this week 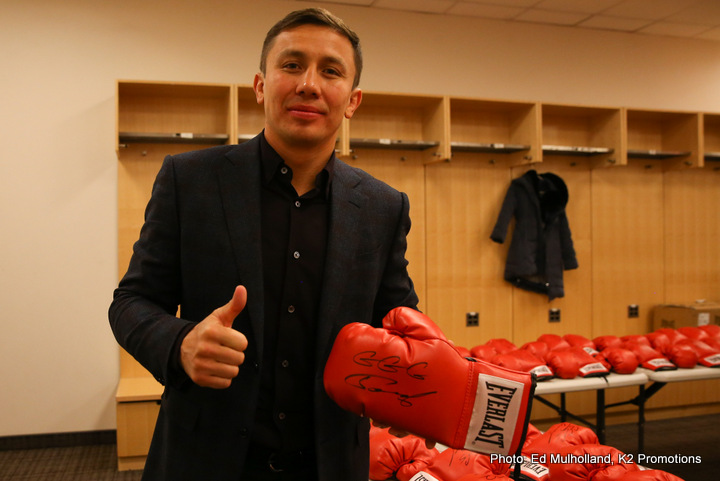 By Tim Royner: Gennady Golovkin and his team will be meeting with DAZN officials to finalize a multi-fight deal this week for him to fight on this platform, and face Saul Canelo Alvarez in a trilogy match this September, according to Mike Coppinger.

If GGG has a tune-up level fight in his first match of his multi-fight deal, it’s unlikely he’ll face Canelo in September unless it’s a lesser quality warm-up level opponent that the former middleweight champion faces.

Golovkin has now been out of action for six months since his 12 round majority decision defeat to Canelo in their rematch on September 15 on HBO PPV at the T-Mobile Arena in Las Vegas, Nevada. If GGG does indeed finalize a multi-fight contract with DAZN this week, it would make it problematic for him to fight in May or June, and then quickly return in September to face Canelo in a third fight. If Golovkin fights in June, he would only three months before he would need to be back inside the ring to fight Alvarez in a trilogy fight. Signing with DAZN now, GGG would likely need to have a fight already scheduled for him to be able to jump into training camp to be ready for a fight in May. It doesn’t seem like that Golovkin will fight again until he meets up with Canelo in September. If GGG stays inactive until September, he’ll have been out of the ring for 12 months by the time he fights again. With Canelo staying busy, facing former WBA ‘regular’ super middleweight champion Rocky Fielding last December, and IBF middleweight champion Danny Jacobs on May 4, he would be much sharper than a ring rusty GGG, if the Kazakhstan fighter sits outside of the ring until September.

There’s no word yet about whether the 36-year-old Golovkin (38-1-1, 34 KOs), who previously held the IBF, IBO, WBA and WBC middleweight titles, will need to fight World Boxing Organization middleweight champion Demetrius Andrade (27-0, 17 KOs) in his first fight of his multi-fight deal with DAZN in May or June before facing Canelo in September. Andrade, 30, is signed with British promoter Eddie Hearn’s Matchroom Boxing USA/DAZN stable, and he’s one of the three notable fighters from the 160 lb weight class that have joined on with DAZN. It was rumored last month that if GGG signed on with DAZN, his first fight with them would be a title fight against WBO champion Andrade, and then a third contest with Canelo Alvarez in September. GGG facing Andrade BEFORE he fights Canelo in September would seem HIGHLY unlikely to happen. It’ll require too much time negotiating the Andrade fight, training, and then recovering from the bout before fighting Canelo in September. There’s also the chance that GGG could very well lose to the unbeaten Andrade. If DAZN still goes ahead and shows a third fight between Canelo and a recently beaten Golovkin, with him coming off of a loss to Andrade, it’s going to hurt interest in the fight. At the same time, if Golovkin just sits outside of the ring until September, the casual boxing fans will have forgotten about him, because he’ll have been out of sight and put of mind for them. It’s been over a year since Golovkin won his last fight in stopping junior middleweight Vanes Martirosyan in the 2nd round in May 2018.

If WBA/WBC middleweight champion Canelo Alvarez (51-1-2, 35 KOs) loses his unification fight against IBF 160 lb champion Danny Jacobs (35-2, 29 KOs) on May 4, it’s also going to hurt a third contest with Triple G for September. Does DAZN still go ahead and have Canelo and Golovkin fight each other under those conditions with one or possibly both coming off of losses or do they have the fight rescheduled for May of 2020 on Cinco de Mayo holiday weekend in Las Vegas? Canelo is signed with DAZN for five years, so there’s no rush in putting him back in with Golovkin if one or both of them lose their next fights. It’s not likely that Golovkin will agree to fight a slick southpaw like WBO 160 lb champion Demetrius Andrade coming off of a long layoff from the ring. Andrade, 6’1″, would be a handful for the soon to be 37-year-old Golovkin even if he was sharp and at his best. But for Golovkin coming off of a long nine to ten month layoff from the ring, it would be bad news for him. Andrade has been dealing with inactivity as well with his own boxing career over the last three to four years, but he’s a lot younger than GGG. Andrade also isn’t coming off of a grueling 12 round decision loss like Golovkin is. While some boxing fans think Golovkin deserved a win over Canelo in their last fight in September, it’s impossible to deny that GGG took a lot of punishment in that fight, more than Alvarez did. Golovkin got hit a lot with shots that hit him flush. The punches that GGG was landing on Canelo were ones where he would turn his face away to lessen the impact.

To get the most mileage out of the third Canelo-GGG fight, Golovkin needs to face a quality fighter like Andrade. If DAZN is paying Golovkin a lot of money, they would likely want him to make the Canelo fight as big as possible by GGG facing a good fighter like Andrade first in May or June before taking the trilogy match in September. Golovkin fighting an easy mark like Hassan N’Dam in his first fight with DAZN won’t help build the Canelo fight. The third Canelo vs. GGG fight not need much build up at this point. The boxing fans already know about the two, and it would be the hardcore fans that would want to see GGG in against a good fighter like Andrade before the third Alvarez fight. If Golovkin were to lose to Andrade, it would put pressure on Golden Boy Promotions and DAZN to have Canelo face Andrade in September instead of GGG. It doesn’t mean that Canelo wouldn’t eventually face Golovkin again. It just means that the fight would have be kicked down the road to May of 2020, if GGG doesn’t lose again to someone else before that happens. There’s no telling how much Golovkin has left in the tank after his last fight with Canelo. There’s a blueprint in how to beat Golovkin now following his two fights with Canelo, and his close contest with Danny Jacobs in 2017.

SOURCES: GGG and his team are meeting with DAZN officials this week to finalize terms of multi-fight deal. The former middleweight champion is headed toward a September rematch with Canelo Alvarez in second fight of pact assuming the Mexican star beats Daniel Jacobs on May 4