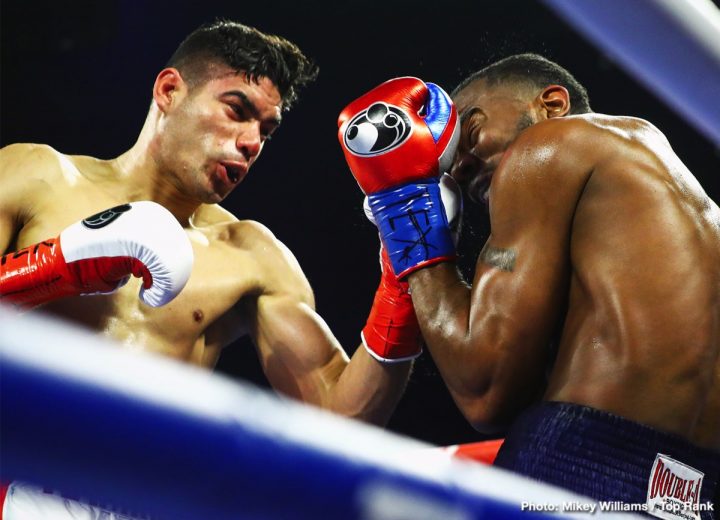 By Mike Smith: WBO super middleweight champion Gilberto ‘Zurdo’ Ramirez (39-0, 25 KOs) will be making light heavyweight debut next month on April 12 against former 175 lb world title challenger Tommy Karpency (29-6-1, 18 KOs) in a scheduled 10 round fight on the undercard of Vasyl Lomachenko vs. Anthony Crolla on Top Rank Boxing on ESPN at the Staples Center in Los Angeles, California. The Ramirez vs. Karpency fight will likely be streamed on ESPN+.

This is supposed to be a testing out fight for the 27-year-old Ramirez to see how well he performs at 175 before he potentially makes a permanent move up to this weight class. It was recently believed that Ramirez would be vacating his World Boxing Organization 168 lb title, and moving up to light heavyweight on a permanent basis.

If Ramirez looks good against the southpaw Karpency, it’s possible he could choose to stay at 175. Top Rank boss Bob Arum could setup fights between Ramirez and IBF light heavyweight champion Artur Beterbiev (13-0, 13 KOs) and/or WBC 175 lb champion Oleksander Gvozdyk (16-0, 13 KOs). Both of those fighters are with Top Rank Boxing, and they’re natural fights for Ramirez, who still hasn’t faced any big names during his 10-year pro career. Since winning the WBO super middleweight title in 2016 against Arthur Abraham, Ramirez has defended it five times successfully in defeating Max Bursak, Habib Ahmed, Jessie Hart twice and Roamer Alexis Angulo.

Ramirez has looked good in those fights, but he’s not stepped it up against a higher level of opposition for some reason. Top Rank would know why they haven’t matched Gilberto against better fighters. Some boxing fans feel that Ramirez’s career potential has been wasted by him not being matched against better fighters. It was certainly a missed opportunity recently when Ramirez didn’t sign on last year to compete in the World Boxing Super Series super middleweight tournament. This would have enabled Ramirez to potentially face the likes of Callum Smith, Rob Brant, George Groves, Chris Eubank Jr. and Juergen Braehmer. Ramirez would have increased his popularity by taking part in the WBSS tournament.

Ramirez, 6’2″, has good size for a super middleweight. If he transition into the light heavyweight division, he’s going to need a lot more punching power and defensive skills than what we’ve seen him display in his fights. Jesse Hart had no problems hitting Ramirez with uppercuts repeatedly in their two fights, which were both close decision wins for Gilberto. If Ramirez continues to use his same brawling style of fighting if/when he moves up to 175, he’s going to get taken apart by the sluggers in that weight class. Top Rank will obviously want to match Ramirez against Beterbiev and Gvozdyk, but those guys aren’t going to be outsmarted by him the way that past his prime Arthur Abraham was in 2016. Further, won’t be able to beat Beterbiev and Gvozdyk with his size, because those guys are big, strong and won’t be over-matched the slightly taller Ramirez.

Ultimately, Ramirez will likely chose to remain at super middleweight for as long as he can rather than make the move up to light heavyweight on a permanent basis and have to settle for being just a contender level fighter instead of a champion. Even if Ramirez stays at super middleweight, his days are numbered as a champion. Ramirez has had a good three-year run as the WBO 168 lb champion, but only because of the match-making that’s been done for him. Had Matchroom Boxing positioned Callum Smith with the WBO instead of the WBA, Ramirez likely would have already lost his WBO title already. Smith is a very good fighter, and he’s not going to lose anyone soon with the way he’s fighting.

Karpency has looked good at times, but he’s not been able to handle the better opposition when he’s stepped up a level. He has losses to Oleksander Gvozdyk, Adonis Stevenson, Andrzej Fonfara, Nathan Cleverly and Karo Murat. Karpency shockingly dropped Gvozdyk in the first round of their fight in July 2016. Gvozyk came back to stop Karpency in the seventh. In easily the biggest win of Karpency’s career, he defeated former light heavyweight champion Chad Dawson by a 10 round split decision in October 2014. Dawson had an injured arm during the fight, but it was still a good win for Karpancy. This wasn’t a prime Dawson that Karpency defeated, however. It’s pretty obvious had Karpency fought Dawson in the zenith of his career back in 2006 and 2007, he would have badly lost to him. Dawson wasn’t anywhere close to being at his best at the time that Karpency fought him five years ago. Adonis Stevenson had an easy time defeating Karpency by a third round knockout in 2015. Karpency was out of his class against the southpaw Stevenson.

Other potential fights on the April 12 Lomachenko vs. Crolla card: