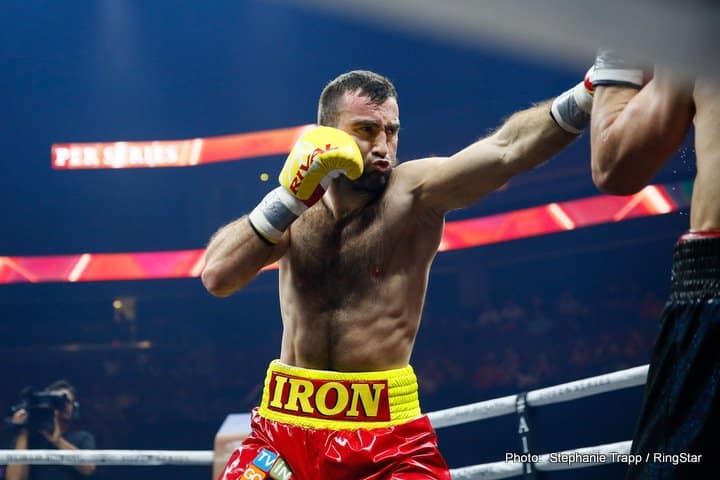 By Tim Royner: Murat Gassiev reportedly will be signing a multi-fight deal with Eddie Hearn’s Matchroom Boxing USA/DAZN promotional company, according to Mike Coppinger. This move was expected after Hearn hinted this week that he was signing a well known fighter that would be moving up to heavyweight.

Adding Gassiev, 25, to his Matchroom stable at heavyweight will allow Hearn to move his strategically for his DAZN cards. Hearn still hasn’t confirmed this signing of Gassiev, so we’ll have to wait and see what he says. With everyone talking about it, Hearn will have to say something about Gassiev. Hearn can make some fights using Gassiev as a chess piece. Whether Gassiev can win against even mid-level heavyweights like Michael Hunter, Oscar Rivas, Alexander Povetkin, Joseph Parker, and Carlos Takam is debatable. Like Gassiev, those fighters have heavy hands as well, but they’re faster, and capable of throwing many more punches per round than he can. At the heavyweight level, Gassiev might just be a typical fighter, an nothing special.

Since a lot of American boxing fans never got a chance to see the World Boxing Super Series cruiserweight tournament last year, it’s unlikely that the casuals will have ever seen Murat Gassiev fight. As such, they might be all that interested in subscribing to DAZN in order to see Gassiev fight. This is a good signing for Hearn to have Gassiev fight on Sky for his UK cards in London, but it’s unclear whether the casual boxing fans in the U.S will take notice of Gassiev fighting on DAZN. The hardcore fans in the U.S know of Gassiev, and they saw badly he was beaten in his fight with Oleksander Usyk, and how much he struggled in defeating then 36-year-old Denis Lebedev in 2016. The fans know that Gassiev can hit hard, but he has a problem with being outworked by faster guys that throw a lot of shots. At heavyweight, Gassiev would have major problems with someone like Michael Hunter.

On paper, this is a good signing by Hearn in adding Gassiev to his Matchroom promotion, but in reality, it’s unlikely that he’ll be able to do much at heavyweight due to his slow hands and his poor work rate. Gassiev is similar to British heavyweight Dave Allen in terms of his speed, punching power his stamina.

Former IBF/WBA cruiserweight champion Gassiev (26-1, 19 KOs) hasn’t fought since losing to WBC/WBO champion Oleksander Usyk (16-0, 12 KOs) by a lopsided 12 round unanimous decision in the final of the World Boxing Super Series cruiserweight tournament last year on July 21 at the Olimpiyskiy, in Moscow, Russia. The scores were 120-108, 119-109 and 119-109.

Trained by Abel Sanchez, the same trainer that has trained former IBF/WBA/WBC middleweight champion Gennady Golovkin for the past seven years, Gassiev has won world titles at cruiserweight. However, his low punch output, and slow hands and feet will likely limit his success at heavyweight. You can argue that Gassiev will be lighter version of Adam Kownacki with the same power, but 30+ pounds lighter. Gassiev, 6’3″, has decent height, but he’ll need to add weight if he wants to compete with the best at heavyweight. Gassiev appeared to be fighting in the low 220s after he would rehydrate for his cruiserweight bouts. At 6’3″ 220 lbs, Usyk would be like another Alexander Povetkin in size, but not as capable of throwing combinations with speed the way he does. Gassiev is more of a one punch at a time type fighter. To get him to increase his work rate, and change his fighting style might be asking too much of him. Gassiev fights in short bursts of activity followed by him covering up, and plodding around the ring. Fighting like that at heavyweight could result in Gassiev getting overwhelmed with punches by a faster fighter with speed and power. That style isn’t conducive for success at heavyweight.

Hearn will likely use Gassiev for fights against British heavyweights Derevk Chisora and Dave Allen. It would be a bad idea to put Gassiev in with a fast heavyweight with hand speed, high work rate and mobility. Gassiev won’t do well against those type of fighters. Hearn promotes Oleksander Usyk, but given how easily he beat Gassiev last year in the WBSS final, it would absolutely pointless to ever put them back inside the ring with one another. The Usyk vs. Gassiev fight was so one-sided that it was boring to watch. Gassiev looked like he was fighting in slow motion the entire fight, getting hit with repeated blows to the head by Usyk in rapid-fire fashion. Gassiev would glacially slow shot, and Usyk would then tag him with three straight punches to the head, and move away from him. If Hearn wants to turn off boxing fans, he’ll put Gassiev and Usyk back in the ring with each other. If Gassiev has anything to say about it, he would be wise to let Hearn know that he’s not interested in fighting Usyk ever again.

Gassiev was an odd fit at cruiserweight. He was a big, slow guy with tons of power, but known for his very low workrate. Usyk took advantage of Gassiev’s low punch output to overwhelm him with weaker shots that he threw by the dozens in each round of their last year. Usyk didn’t bother to load up with anything, because he knew he could land far more shots and win an easy decision. Usyk landed 252 of 939 punches for a 27% connect rate against Gassiev, according to CompuBox’s punch stats. In comparison, Gassiev landed just 91 of 313 shots for a 29% connect rate. However, Gassiev did hurt Usyk on one occasion early on after hitting him with a big uppercut. Gassiev landed only 31 power punches in the entire fight. With that few power shots landed, it was clear why Gassiev lost so badly. He needed to be much busier than that for him to have had a chance to win, but he spent too much time waiting for Usyk to stop punching instead of throwing in between his shots. Usyk’s movement gave the slow-footed Gassiev problems as well.