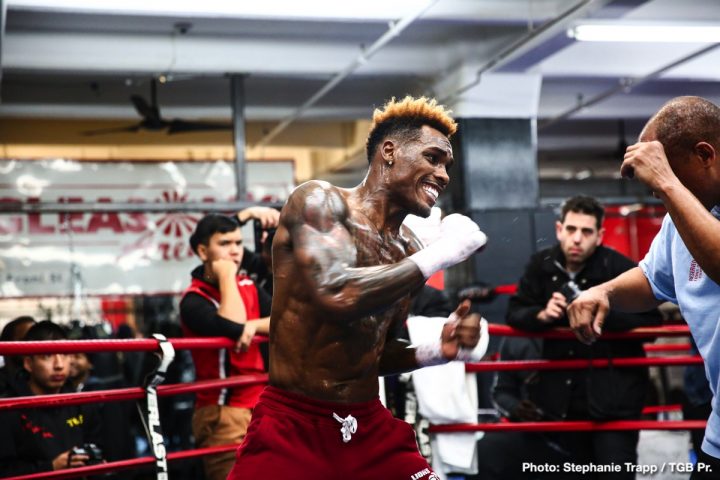 By Mike Smith: Matchroom promoter Eddie Hearn is reportedly attempting to get interim WBC middleweight champion Jermall Charlo (28-0, 21 KOs) to join DAZN by enticing him by pointing out that Gennady Golovkin, Saul Canelo, Demetrius Andrade and Daniel Jacobs are all now signed with the streaming giant.

If Hearn can ink the 28-year-old Charlo to DAZN, he will have performed a hat trick by signing the four biggest talents in the 160 lb weight class to the platform.

“We’ve got GGG, Canelo, Andrade and Jacobs. You’ll be paid three times as much money as you’re making at the moment and fight all those guys. What the [expletive] are you waiting for?” Hearn said to the boxing media.

Whether Charlo can still get fights against the DAZN fighters without him signing with that platform is the big question. Charlo is with Premier Boxing Champions, and he’s now 11 years into his career without having fought a big name. It would be a shame if the next 10 years of Charlo’s career is same for him without a big fight.

If Hearn can throw some big money at Jermall, perhaps he’ll mover over to DAZN. It obviously will help Hearn if DAZN signs WBC heavyweight champion Deontay Wilder. It a big addition by DAZN to sign Golovkin this week. Adding Wilder to the streaming giant, it could lead to a huge influx of the other big names that are available to move over to DAZN as well. The limiting factor might end up being the money. At some point, DAZN will run out of money to sign all these guys in the short term until the subscriptions start soaring.

Jermall is the bigger puncher of the Charlo twins, and the guy that is seen as a future star at 160. Charlo has been having problems getting a title shot since he earned his mandatory spot with the World Boxing Council in 2017 with his 4th round knockout win over Jorge Sebastian Heiland. Charlo has been waiting ever since. The WBC recently attempted to get Golovkin to fight Charlo for interim WBC title, but GGG chose not to take the fight.

Charlo defeated Matt Korobov by a 12 round unanimous decision in his last fight on December 22 in New York. It was a close fight, but Charlo won it by the scores 116-112, 119-108 and 116-112. It was a tactical nightmare for Charlo in facing the Russian southpaw Korobov after his original opponent Willie Monroe Jr. tested positive for a banned substance and was pulled from the card. Charlo barely dodged a bullet in squeaking by the 36-year-old Korobov.