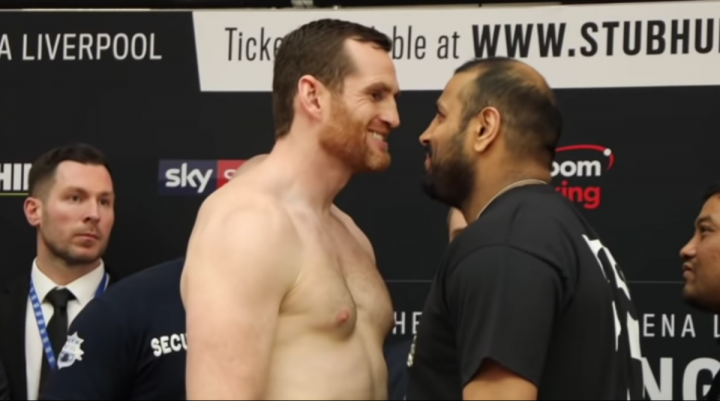 The trash talking between Kash and Price got to the level last Thursday at the final news conference where it looked like it could potentially get physical. Thankfully, Friday’s weigh-in was a mild affair with both heavyweights smiling during their face off. It looked like Kash was making faces at Price, 6’8″, to try and get him to start laughing or smiling.

Price’s 252 lbs is the lowest weight for him in four years since he scaled in at 249 lbs for his disastrous fight against Erkan Teper on July 17, 2015. That turned out to be a massacre with Teper knocking Price out in two rounds. As such, Price’s weight for today’s weigh-in is no indicator for success. When Price was as his best earlier in his career, he typically weighed in between 245 to 250 lbs.

This is an important fight for Price, 35, more so than Kash, because he’s a lot older than the 27-year-old, and he’s clearly running out of chances to get that one big money fight that he wants before he calls it a day. Price’s promoter Eddie Hearn of Matchroom Boxing would like to give him a big fight, but it’s hard for him to justify doing that with Pricey falling apart against guys like Teper, Sergey Kuzmin, Christian Hammer and Alexander Povetkin. In the last two years, the losses for Price have becoming the norm. He’s lost three out of his last five fights, and things are starting to look a little bleak for him. There’s no shame in Price getting knocked out in the fifth round by 39-year-old former World Boxing Association heavyweight champion Alexander Povetkin last year in March.

Povetkin is still a good fighter, but the way Price lost that fight wasn’t so much based on lack of talent. Like Price’s second loss to Tony Thompson, and his seventh round stoppage defeat at the hands of Hammer in February 2017, it was a problem of Price gassing out. Price was 29-years-old when he faded in the fifth round and was stopped by Thompson in their rematch in July 2013. Price shouldn’t have gassed out at that age, but he did. That suggests that the stamina problem that Price has is going to be there for him no matter how hard he trains. The only thing Price can do is to make sure he keeps the pace of his fights at a slow enough pace for him not to fade like that in the future starting on Saturday night against Kash.

“He lit the fuse,” Price saying to IFL TV about how Kash angered him at Thursday’s news conference with his trash talking. “Eddie Hearn asked him a question, and his response was erratic, that he was just going to come in and get me. We just had a bit of back and forth. I quite enjoyed it. To be honest, it’s fear. He thinks he can get into my head by trying to put it on me. People can say what they want about my mentality. There are a lot of people with mental health problems out there. I’m hoping he comes out and fights the way he speaks, but he won’t. I do believe he’ll freeze, and go into the defensive mode. That’s what I think,” Price said.

Price looked like he was hyperventilating while giving interviews after the news conference with Kash. Price can say that Kash didn’t get into his head with his trash talking, but it sure like he did with the way he had Pricey so worked up.

Ali doesn’t possess much in the way of punching power, so it’s going to be tough for him to take the fight to Price to tire him out to score a knockout. However, Price has been knocked out by non-punchers Tony Thomson and Christian Hammer. Those guys simply fought at a fast pace, and wore Price out to get him to the point where he had nothing left and was vulnerable to getting stopped. The only question is can Kash handle Price’s punching power long enough to wear him down. Price is going to be looking to put it on him.

“He was negative,” Price said in remembering how Ali fought him during their sparring session in the past. “He hardly threw any punches. He would throw a punch in the last five seconds of the round, and then that was it,” Price said.

You can’t get too much from a sparring session that took place two years ago. It was sparring, and there wasn’t pressure that there will be on Saturday night. If Ali can get Price fighting at a fast enough pace, he could take him out.