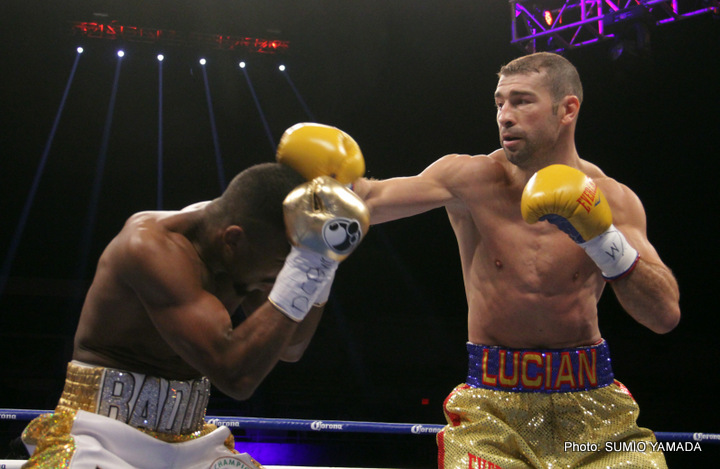 By Trevor McIntyre: Former super middleweight champion Carl ‘Cobra’ Froch came out of the woodwork on Friday to tell the retiring Lucian Bute “good luck” with his retirement, and then then made a snide comment about how it was a pleasure for him to “Cobra him” in their fight in 2012.

This isn’t the first time that Froch has taken a shot at a retiring fighter. He also did it when James DeGale announced his retirement.

Froch is specifically talking about how he knocked former IBF 168 lb champion Bute (32-5, 25 KOs) out in the fifth round in their fight on May 26, 2012 at the Nottingham Arena in Nottingham, England. Froch reminding the retiring Bute (32-5, 25 KOs) about a painful loss that happened to him seems like a mean-spirited move on his part.

This is supposed to be a time where people say positive things to a retiring fighter, who his best during his career, but former IBF/WBA/WBC super middleweight champion Froch (33-2, 24 KOs) has broken from the tradition by taking a shot at Bute by seeming to gloat about his win over him.

Good luck to @butelucian in his retirement. A true gent and a great fighter. It was a pleasure to Cobra him in 2012 👊🏼

What makes this comment from Froch worse is Bute’s boxing career was never the same after his loss to Carl in 2012. Bute even admitted it that his career started going downhill after his knockout loss to Froch. The defeat didn’t effect Bute so much physically, but rather mentally. He became gun-shy after the loss to Froch, and he he wasn’t able or willing to go after his opponents like he’d done before the defeat.

Froch was a good fighter, but he lost to Andre Ward in a clear defeat in the Super Six tournament final in 2011, and a lot of boxing fans think Froch deserved a defeat in his fight against Andre Dirrell in 2009 in Nottingham. Froch won that fight by a 12 round split decision over Dirrell. Froch lucked out in some regards that Joe Calzaghe retired without fighting him. Calzaghe’s fighting style would have been all wrong for Froch, and he likely would have lost badly to him. Andre Ward didn’t choose to gloat when Froch announced his retirement. He could have, but he didn’t. You can argue that Ward has too much class to take a shot at a retiring fighter the way Froch did.


« Kubrat Pulev vs. Bogdan Dinu battle it out this Sat. on ESPN