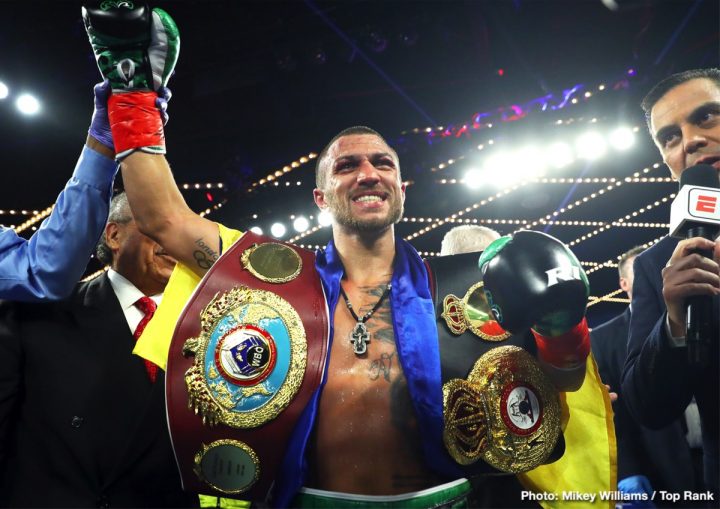 By Andy Farr: Wladimir Klitschko turned professional in November 1996 having won an Olympic gold medal for Ukraine in the summer games in Atlanta that same year. He retired after losing to Anthony Joshua in April 2017. In his 21 years as a pro Dr Steel Hammer only ever fought in his native Ukraine on one occasion. He lost on an 11th round stoppage to Ross Purity in a matchup he was expected to win. Brother Vitali, the future WBO and WBC Titleist also boxed on the same card, also the only time he boxed at home in a 47 fight career.

After 13 professional outings P4P #1 and double Olympic and World amateur champion Vasyl Lomachenko has yet to perform at home in Ukraine. Any world champion boxer wants to fight in front of his adoring fans at home and yet not if you are from Ukraine it seems.

Yet another Ukrainian Olympic gold medallist, Alexander Usyk seems to have broken the mould. Now the undisputed cruiserweight champion, Usyk has had 8 of his 16 pro bouts on home soil.

Boxing is a business as well as a sport. It is also a short career and fighters have to earn their money where ever the best payday presents itself. This is the reason we are seeing The Ukrainian Invasion. One can only hope that stars such as Lomachenko and Usyk can one day defend their titles in front of their own people, money and politics allowing.

For now though it is the rest of the world that gets to see these great talents perform in places like Madison Square Garden where “Loma” took the scalp of Jose Pedraza in December 2018 and Manchester, England where Usyk dismantled Liverpool’s Tony Bellew a month earlier. We have to count ourselves lucky because we could well be watching two of the best technical boxers ever to grace the sport seeing out their careers here in the West in the same way Kazakhstan’s Gennady Gennadyevich Golovkin, better known as “GGG” has.

Lomachenko is due to defend his WBA Lightweight title against former champion Anthony “Million Dollar” Crolla on April 12th at The Staples Center, Los Angeles, California. While Crolla earned his spot as WBA #1 contender by beating Indonesia’s Daud Yordan in hometown Manchester last November he was not the first choice opponent for Lomachenko, that honour fell to newly crowned IBF champion Richard Commey of Ghana. Commey injured his right hand in his winning effort against Russian Isa Chaniev at the beginning of the month (Feb).

The real problem for Lomachenko and his promoters at Top Rank is finding opponents that can give “Loma” a test. His last three fights have been against Guillermo Rigondeaux, Jorge Linares and Pedraza. Now, while some might question Pedraza as a top level performer, it would be very difficult to deny the other two that distinction. I for one do think Pedraza falls into that category as well. Unless Mayweather Promotions decide to risk Gervonta “Tank” Davis stepping up a division and challenging the Ukrainian, he is going to run out of stiff opposition at lightweight very soon, such is his skill level. I find it very unlikely that Mayweather cannot see the dangers involved with a Davis vs Lomachenko matchup at this stage. It will be to Davis advantage to let this fight stew for a while longer and let Lomachenko age and at the same time allow Davis to gain valuable experience. Davis is the much bigger puncher but against an opponent that is extremely hard to catch cleanly when he chooses to be it’s not going to be the deciding factor it would be against normal opposition.

Our other Ukrainian star Usyk is due to make his heavyweight debut very soon. An announcement is due shortly from Matchroom Sports boss Eddie Hearn. The plan seems to be to get Usyk ready to challenge British heavyweight star and holder of 3 of the major titles, Anthony Joshua early in 2020. The thinking behind this is to give the 6ft 4 inch Usyk time to grow into the weight. There was still talk of him making further defences of the cruiserweight belts until recently which indicates that fighting a big heavyweight like Joshua might be a cause for concern to the Usyk management team. Perhaps fellow Ukrainian Wladimir Klischko has passed on his thoughts on after his heavyweight classic with Joshua at Wembley, England in 2018.

So it seems we are set to see some of the biggest fights that can be made in the near future contested by these two Ukrainian superstars. I for one cannot wait!


« Jarrell Miller to spar Daniel Dubois to prepare for Joshua