Jarrell Miller to spar Daniel Dubois to prepare for Joshua 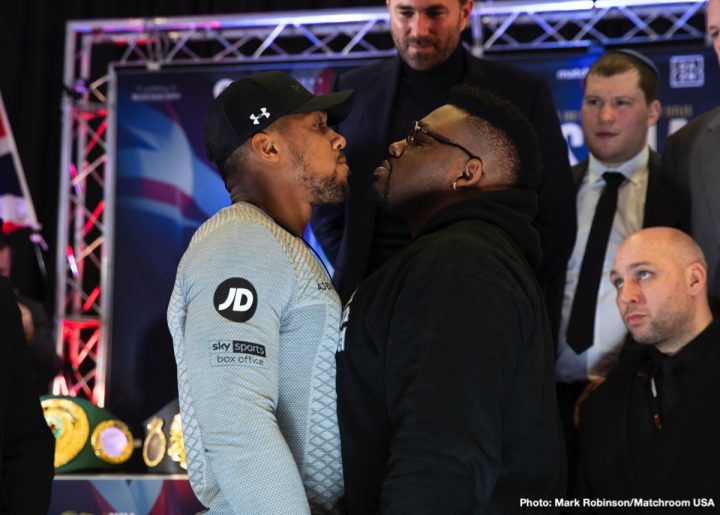 By Scott Gilfoid: In hopes of pulling off a huge upset, unbeaten Jarrell ‘Big Baby’ Miller (23-0-1, 20 KOs) plans on having 6’5″ British heavyweight Daniel Dubois (9-0, 8 KOs) come over to the United States to help him out with sparring to get him ready for a title hot against IBF/WBA/WBO heavyweight champion Anthony Joshua (22-0, 21 KOs) for their bout on June 1 at Madison Square Garden in New York, according to Michael Benson.

Miller, 30, is selling Joshua short in using the glacially slow Dubois to assist him in getting ready for their fight on DAZN. The only things that Dubois has in common with Joshua is his size, power and the fact that he comes from the UK. The speed, punch assortment and boxing skills of Joshua is light years ahead of Dubois.

Joshua is on another level than the young Dubois. This move by Miller will likely work only for mind game purposes to mess with Joshua, but not in a real sense. Miller needs a guy that can move, box, and throw quick jabs the way Joshua will be doing. Miller would be better off getting a high quality sparring partner like Malik Scott, or going after one of the top amateur fighters and luring them into training camp to help him.

Dubois, 21, is preparing for his fight early next month against former heavyweight world title challenger Razvan Cojanu (16-5, 9 KOs) on March 8 at the Royal Albert Hall, in Kensington, UK. It’s not likely that the 239 pound Dubois will be flying over to the U.S to spar with ‘Big Baby’ Miller until after his 10 round bout against the 6’7 1/2″ Cojanu, since the two of them are completely different fighters. Miller, 6’4″, wouldn’t be the right type of heavyweight to help Dubois get ready for the the crafty and highly mobile Cojanu. Miller would be the type of guy that could help Dubois get ready for someone like the 273 lb Bermane Stiverne.

It’s generally agreed that Miller’s best chance of beating Joshua is to walk him down, stay in close and rev up his high volume punch output to high gear, and throw as many shots as possible to wear AJ down. It’s academic at this point in Joshua’s career that his stamina is horrible, and it’s not going to improve no matter what he does. Joshua’s stamina was poor when he first started his pro career at 24, and it’s not getting better no matter how hard he works on improving his cardiovascular system. The only thing Joshua can do is try and lose some muscle to get down to the 220s that he was in the Olympics at in 2012, but he’s clearly not going to do that.

Miller is likely going to be cannon fodder for Joshua no matter who he spars in training camp. You hate to say it, but Miller is so utterly over-matched in this fight that he’s going to need a major miracle for him to beat AJ. Having Dubois fly over to the U.S to help him spar isn’t likely going to help him on the night.


« Josesito Lopez: “Mikey Garcia hits as hard as any welterweight”