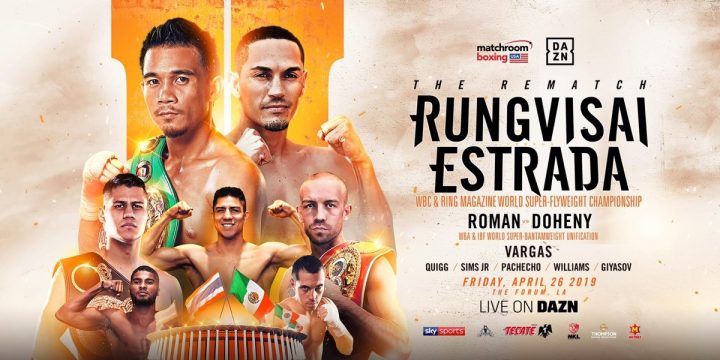 By Dan Ambrose: Eddie Hearn of Matchroom Boxing USA has just announced the April 26 rematch between WBC super flyweight champion Srisaket Sor Rungvisai and Juan Francisco Estrada II for a fight on DAZN at The Forum in Los Angeles, California. The co-feature bout will be a unification match between WBA super bantamweight champion Daniel Roman and IBF champion TJ Doheny.

Rungvisai (47-4-1, 41 KOs) defeated former WBA/WBO flyweight champion Estrada (38-3, 26 KOs) by a 12 round majority decision last year in February 2018 at The Forum in Inglewood, California. Although the judges scored it a majority decision, it was pretty one-sided. Other than the 12th round, in which Estrada hurt Rungvisai, the other 11 rounds of the fight were one-sided with the Thailand knockout artist chasing his opponent around the ring, hitting him with monstrous body shots. The sound of Rungvisai’s shots landing each time was a tremendous thudding sound. It was no wonder that Estrada wanted no part of standing his ground and fighting Rungvisai, as Roman ‘Chocolatito’ Gonzalez had tried in vain to do, and ended up paying for in losing twice to him. The way that the Rungvisai vs. Estrada fight played out last year, it’s not likely to go any different in the rematch. If Estrada tries to straight at Rungvisai early in the fight, he’s going to get chewed up and spit out by the powerful Thailand fighter. Estrada hurt Rungvisai in the 12th, but that was when he was exhausted, and well ahead on the scorecards. If Estrada tries to start in where he left off in the 12th round of their previous fight, he’s going to be sorry for it. Estrada doesn’t have the punching power to slug with a guy like Rungvisai. The only guy that would have a chance of punching with Rungvisai at 115 is IBF champion Jerwin Ancajas. Estrada is more of a finesse fighter, who tries to box his way to decisions now that he’s fighting at super flyweight. Estrada was a better fighter when he was at flyweight. At super flyweight, he’s had to change his game to be more of a technician, because he can’t out-slug the guys in this weight class. On paper, Rungvisai vs. Estrada 2 is an interesting fight, but in reality, it’ll likely be a dull repeat of their previous fight last year with Estrada doing a lot of running to keep from getting hit. For the boxing fans that actually remember the previous Rungvisai-Estrada fight from a year ago, they remember seeing Estrada wanting no part of standing in front of Rungvisai.

No mention was made by Hearn of Kell Brook (38-2, 26 KOs) fighting Jessie Vargas (28-2-2, 10 KOs) on the card. Those two were supposed to have been in negotiations for a fight at junior middleweight. There’s all kinds of speculation going on for why the Brook vs. Vargas fight isn’t going down. The general consensus formed by a lot of boxing fans is Brook, 32, didn’t want to take the risk of fighting Vargas, and potentially losing the fight. Brook is waiting for Amir Khan to face WBO welterweight champion Terence Crawford on April 20, so that he can setup a stadium fight against him in the UK. It definitely looks incredibly weak on Brook’s part that he may just sit and wait for what some see as a cash out fight for him against Khan rather than taking some risks by fighting good opposition like Jarrett Hurd. You can’t really call Vargas good opposition because of these reasons: 1. Vargas hasn’t won a fight in two years since 2017. 2. He’s not a junior middleweight, he’s a welterweight. 3. Vargas is fringe contender at 147, and not a top caliber fighter.

Deontay Wilder vs. Tyson Fury II NOT happening next »