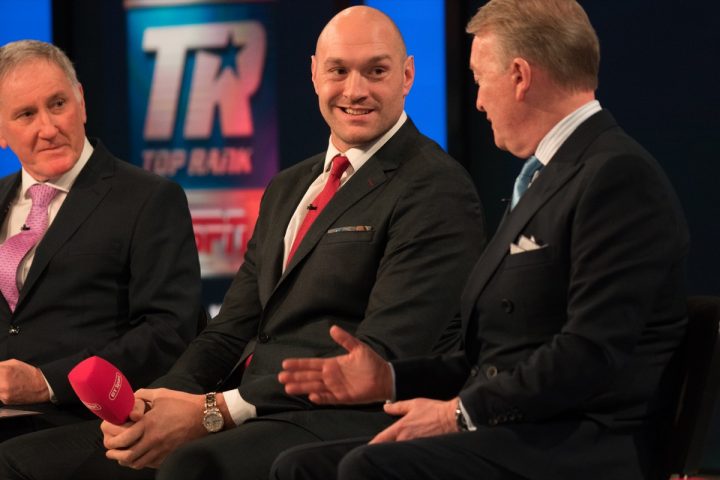 By Donavan Leonard: With the stroke of a pen, Tyson Fury has turned the heavyweight division on its head and handed ESPN and Top Rank the reins to one of the most powerful figures in boxing. Conversations going into this past weekend were casual and focused on the “inevitable” wrapping up of a few details and an “imminent” announcement that the rematch between Fury and WBC Heavyweight Champion Deontay Wilder would be a go for May 18th. That talk could not have been further from the truth.

Unknown are the points that held up the signing of the bout and exactly when Top Rank became a part of the picture, and in time they may or may not be revealed. What is crystal clear is the “Gypsy King” has found a home on ESPN, the Worldwide Leader in Sports, found in over 90 million homes in the United States.

Beyond the immediate impact of at least temporarily derailing the Fury-Wilder rematch, the implications of the signing could be much larger, and perhaps even better for the boxing landscape. It has been hashed and rehashed many times that Bob Arum, CEO of Top Rank, and Al Haymon,  adviser for the PBC stable, are not the best of friends.   They have the working relationship of water and oil. Arum has suggested that Haymon will not cooperate with anyone, among other things, and that making some of the fights that fans want to see is impossible. (Haymon does not give interviews, so an equally disparaging remark made by him about Arum is not readily available.) Bringing Fury to the Top Rank stable could be the economic linchpin to change that dynamic.

Fury is the known opponent who could provide Wilder, and the PBC, with the largest amount of non-Floyd Mayweather pay-per-view revenue. Arum knows it. Haymon knows it. Wilder knows it. Keeping Fury away from Wilder right now gives Wilder a chance to ponder his options. How long will a fighter like Wilder be loyal to Haymon and the PBC, making $2M to fight Luis Ortiz, Adam Kownacki, or Andy Ruiz, while watching his rivals, Fury and Anthony Joshua, pocket $20M to $30M per fight? At what point does Wilder cross the aisle to make that type of purse?  Will Haymon be willing to part so easily with the heavyweight champion?  Or will he be open to suggestions that may benefit both parties?

NEWS:   Deontay Wilder needs hand surgery, will fight in April or May

While Arum holds one of the keys to Wilder’s financial bonanza, Haymon possesses pieces that Arum would love to have himself: Errol Spence and Mikey Garcia. Haymon will have to work hard to appease Wilder, but Arum has his own hands full trying to accommodate his two superstars Vasyl Lomachenko and Terence Crawford. Soon Crawford will be bereft of easily-made matches with perceived quality opposition. The upcoming bout with Amir Khan is a step in the right direction for his popularity, but then who?  Egidijus Kavaliauskus? Luis Collazo? He wants an opportunity to prove that he is the best welterweight in the world and Haymon and the PBC have Keith Thurman, Shawn Porter, and the aforementioned Spence at their disposal. As for Lomachenko, two intriguing bouts can be made that also entail crossing the road: Gervonta Davis and Garcia. The same questions posed for Wilder and Haymon can be asked of Crawford, Lomachenko, and Arum. Neither of these lighter weight bouts is financially worthwhile to justify working  jointly on a pay-per-view, yet they are important to the sport and the individuals involved. To deny Crawford a chance against the last PBC welterweight standing or for Lomachenko/Davis/Garcia not having the opportunity to discover which fighter is the best among them is wrong for the fans, the historians, and the fighters, who will be left having to ask the question “What if?”  Not only is it wrong, it shouldn’t be necessary.

To this end, it appears that Arum has made the first move.  The heavyweight bout between Wilder and Fury may still take place, if only a little further down the road. This will not be a move of marination, but of matchmaking. If the game is played well it will finally bring about the meeting between Haymon and Arum or their representatives to work on the big picture of the game. Coffers are filled by heavyweights, but conversations about greatness are filled by preeminent fighters facing each other in their primes. The signing of Fury by ESPN and Top Rank just might be the catalyst needed to fill both.