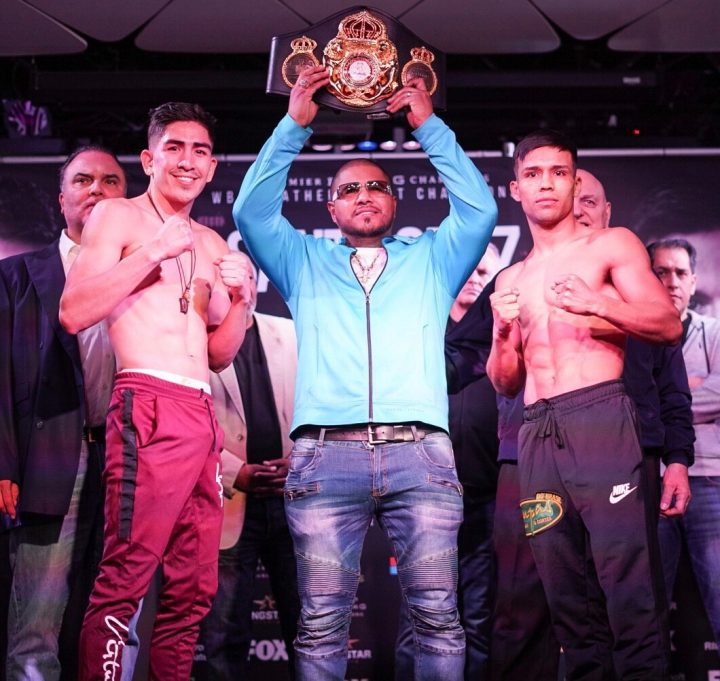 By Mike Smith: Leo Santa Cruz (35-1-1, 19 KOs) will be defending his WBA Super World featherweight title tonight against replacement opponent Rafael Rivera (26-2-2, 17 KOs) in the main event in a big triple-header on Premier Boxing Champions [PBC] on FOX at the Microsoft Theater, in Los Angeles, California.

This will be the sixth title defense for the 30-year-old Santa Cruz of his WBA Super World title that he captured in 2015 in beating Abner Mares by a 12 round majority decision. Tonight’s Santa Cruz vs. Rivera fight card will begin at 8:00 p.m. ET/ 5:00 p.m. PT

This fight is viewed as a horrendous mismatch. Rivera, 24, is a replacement for Santa Cruz from his original opponent Miguel Flores (23-2, 11 KOs), who dropped out of the fight due to injuries. Flores had lost 2 out of his last 3 fights, and didn’t rate a title shot against Santa Cruz. Flores’ replacement Rafael Rivera is no better, having lost 2 out of his last 3 fights himself in defeat to Joet Gonzalez (21-0, 12 KOs) and Joseph Diaz Jr. (28-1, 14 KOs).

The only thing you can say about those losses is Rivera lost two two really good fighters, but never the less, he still got beat and he clearly doesn’t rate a world title shot. Santa Cruz defending against these kinds of guys shows that the objective for him ad his management appears to be a title milking fight rather than one where the boxing public is getting a great fight.

anta Cruz has compounded that by saying he’s concerned about his life after retires, and he doesn’t want to take punishment in his fights anymore. When you hear Santa Cruz talking like that, and then see him matched against a fighter with 2 defeats in his last 3 fights, you put two and two together and see that he’s on a milking run. It’s a shame. The boxing public wants to see Santa Cruz in a high profile fights against WBC featherweight champion Gary Russell Jr., IBF champ Josh Warrington, WBO champ Oscar Valdez, Gervonta Davis [WBA Super World 130 lb champ], WBC 130 lb champion Miguel Berchelt, WBA World 130 lb champion Andrew Cancio and IBF 130 lb champion Tevin Farmer. There are a lot better options for Santa Cruz than for him to be fighting a guy that doesn’t deserve a title shot in Rafael Rivera.

Rivera comes into the fight tonight with Santa Cruz with the following results in his last six fights:

Rivera’s recent ring record is absolutely horrible on every level for a guy that is being given a world title shot by Santa Cruz. If Santa Cruz had any say so whatsoever in in the choice of his opponents with his management, he should have put his foot down and told them that he absolutely wanted a better opponent for him to defend his WBA Super World 126 lb title against than Rivera.

This fight is such a bad one for Santa Cruz. The last thing Santa Cruz needs is for him to become a laughing stock as a champion due to the poor match-making that’s being done for him by his management. For the boxing fans that are giving Santa Cruz a pass due to his original opponent Miguel Flores pulling out of the card, he was no better than Rivera. Like this writer said, Flores had lost 2 out of his last 3 fights as well, and had been fighting terrible opposition to win his fights. Surely, Santa Cruz’s team could find better opponents than Flores and Rivera for him to defend his WBA belt against. Even if they had to take Santa Cruz’s career backwards in matching him against Carl Frampton, it would be far better than this fight. Santa Cruz has had two fights a piece against Frampton and Abner Mares. It didn’t make much sense for Santa Cruz to fight Mares a second time recently last June after he had already beaten him in a one-sided fashion in 2015, but the casual boxing fans were still interested in seeing that match-up. You’d like that’s the last time Santa Cruz fights Mares, but you can’s say that it will be. With Santa Cruz being put in with the likes of Rivera, you can’t rule out a third and even a fourth fight with Mares. Santa Cruz says he wants the big fights to shape his legacy, but he’s running out of time. He’s getting older now at 30, and it’s unclear how much longer he ha before he’s finished as a fighter.

“We had already been working with sparring partners who brawl, and that’s what we expect from Rafael Rivera,” Santa Cruz said. “I knew immediately that Rivera was a good opponent. He’s young and hungry, and that makes him dangerous. He can take punches, so we’re ready for 12 rounds. We’re going to be smart in this fight because we know what Rivera can do.”

Rivera, 24, is young, but the part where Santa Cruz refers to him as a “good” fighter is a little off. Rivera is more of a guy that is on a journeyman crash course. He’s hungry, of course, but so are a lot of weak opposition. That doesn’t mean they deserve world title shots. With a 55% KO percentage, Rivera isn’t considered a dangerous puncher. If Rivera chooses to slug with Santa Cruz, it’s going to end badly for him, but that’s probably choice he has to try and win Rivera isn’t much of a boxer. He slugs with his opponents despite not being a big puncher. That’s just how Rivera tends to fight. It works for him mostly only because his opposition has been so bad during his career.

“Rafael Rivera has nothing to lose in this fight, and that is the recipe for a tremendous showdown,” Richard Schaefer, the promoter for Ringstar Sports, said.

Rivera has nothing to lose in the fight, but it’s pretty much unlikely that he’s going to do anything but get knocked out by Santa Cruz. If Rivera is able to go the full 12 round distance tonight, it’ll be a morale victory. You have to see it that way, because this is a huge mismatch on paper. Rivera has never been knocked out before during his seven-year pro career, but he’s also never fought a big puncher like Santa Cruz before. River’s losses to Diaz Jr. and Joet Gonzalez were against guys that aren’t major punchers.

Santa Cruz will walk Rivera down and knock him out within six rounds. This fight could be over very early depending on how aggressive Rivera is tonight.

The co-feature about between former WBC lightweight champion Omar Figueroa Jr. (27-0-1, 19 KOs) will be facing 36-year-old former two time world title challenger John Molina Jr. (30-7, 24 KOs) in the co-feature bout on the card in a 10 round fight at welterweight. This fight could easily steal the show from the main event mismatch between Santa Cruz and Rivera.

Figueroa, 29, has to be viewed as the favorite to win this fight over the aging 36-year-old Molina Jr. However, Figueroa Jr. hasn’t fought in a year and a half due to hand injuries. His last fight was against Robert ‘The Ghost’ Guerrero in stopping him in the third round on July 15, 2017. That was a big, big win for Figueroa, and it was expected to catapult him to bigger fights against world champions. Unfortunately for Figueroa, he’s had hand injuries ever since then that has kept him out of the ring unable to go after the big money fight.

Molina Jr. has been dealing with inactivity. It’s been 14 months since Molina Jr. last fought in destroying the always tough Ivan Redback by a third round knockout in December 2017. It was a good win for Molina Jr., but it was confusing as to why he hasn’t fought since then.

Canelo vs. Jacobs: WBC to create special belt for fight »