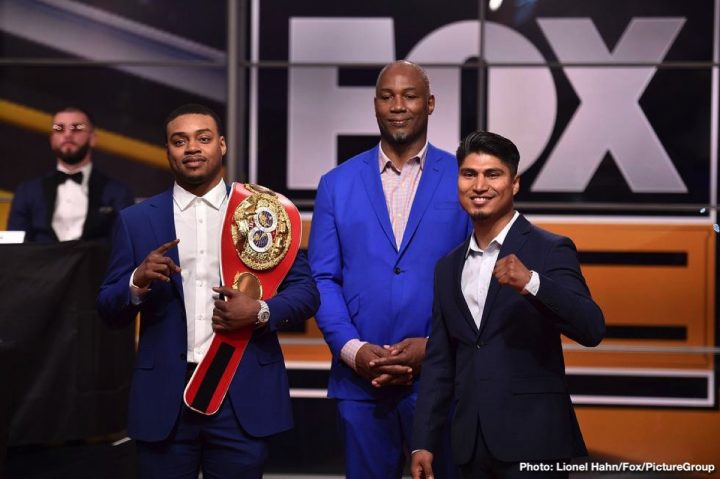 By Dan Ambrose: Mikey Garcia (39-0, 30 KOs) has four weeks to go before he faces IBF welterweight champion Errol Spence Jr. (24-0, 16 KOs) on March 16 in a fight that most boxing fans are predicting to be a ritual slaughter in favor of the Texas native.

In analyzing Spence’s game, Garcia seems to know what he’s up against in facing the talented 147 lb fighter. Mikey isn’t even trying to talk trash about Spence, which has to be seen as him not wanting to anger his opponent and give him something to motivate him even more than he already is.

Mikey isn’t saying what he plans on doing to hold off Spence to keep him from walking through him like butter. Spence is going to be attacking Mikey’s soft midsection, which still looks flabby even now. If Mikey can’t hurt Spence with his shots, he’s going to get walked down and beaten up against the ropes the way that Chris Algieri, Kell Brook, Chris Van Heerden, Carlos Ocampoand Lamont Peterson were. Those were all good fighters, but none of them could keep Spence off of them. Once Spence started hitting them with body shots, it was the beginning of the end for them. Peterson actually wanted to trade body shots with Spence, and that worked out terribly for him, as he was battered and stopped in seven rounds. Spence seemed like he was playing with Peterson by keeping him around longer than he could have so that he could toy with him. That’s a fight that could have ended in three rounds or less if Spence hd gone after Peterson the way he did his last opponent.

The 5’6″ Garcia, 31, has tried his hardest to bulk up as much as possible, but he’s still going to be facing a much bigger and stronger fighter than himself when he gets inside the ring with the 5’9 1/2″ Spence on March 16 on FOX pay-per-view at the AT&T Stadium in Arlington, Texas.

“You don’t get too many fights like this,” Mikey said to Fighthype about his March 16 title challenge against Errol Spence Jr. “We’re going to be stepping inside the ring to try and beat each other up. He’s an aggressive fighter, walking forward, using his height, reach, distance for measuring, and then he let’s go with his hands, hurting his opponents with his power,” Garcia said.

If Garcia can stand up to Spence the way that Saul Canelo Alvarez did in his second fight against Gennady Golovkin, then we might have a fight on our hands. However, Golovkin was 36-years-old, and not expecting Canelo to come forward. GGG had always given ground in the past when his opponents had come forward on him, so it wasn’t that unexpected that he backed up when Alvarez pressed forward. Spence is a different story. He’s not 36, and he doesn’t have a history of backing up when his opponents come at him. If Mikey presses Spence, and he doesn’t go anywhere, we could see a quick knockout for Errol. But it would still a better way for Mikey to go then him running from Spence for as long as it lasts. At least Mikey’s boxing fans will see him as being courageous if he fights it out in a dog fight for as long as it lasts. There’s two ways for a fighter to lose: They can run and look cowardly in the eyes of their boxing fans or they can stand their ground and go down swinging. Most would argue that it’s for a fighter to lose the second way. The third way for a fighter to lose is to have their trainer pull the plug in between rounds, saying that they’re injured. We’ve already see that with Robert Garcia stopping Mikey’s fight with Orlando Salido after the 8th round due to him suffering a nose injury.

Mikey should try and keep his game plan for the Spence fight secret, considering he’s already got work cutout for him in moving up two weight classes to face arguably the best fighter in the welterweight division on March 16. With that said, there’s not really much Mikey can do in this fight but come forward and try to land something big. If Mikey stays on the outside, Spence will use his long reach to jab him to pieces at range. Mikey has to become the pressure fighter for him to have a shot at winning this fight.

On paper, the Spence vs. Garcia fight is similar to Errol’s size mismatch againt 5’6 1/2″ Leonard Bundu (33-2-2, 12 KOs) in August 2016. Bundu was an excellent fighter with respectable punching power, but he was just too small to compete against Spence in that fight. In the past, Bundu had given Keith ‘One Time’ Thurman a lot of problems in their fight in December 2014. Bundu’s pressure had caused Thurman to get on his bike to stay on the outside. He could’t handle Bundu’s game when they were exchanging. Spence was too big and powerful for Bundu, and he easily walked him down and stopped him in the 6th. Bundu retired after the loss.

“He’s got good body punching, body shots,” Garcia said in continuing to analyze Spence. “He’s left-handed, so he likes to measure everything with his left to the body. He actually reminds me a little bit of myself. He’s straight forward. Nothing flashy with speed or crazy footwork, but very efficient. He’s going to come forward. He uses his size and power on his opponents, but he does have very good fundamentals with a good base and good footwork. He’s always in a good stance, and he always knows how to let his hands go and when to let his hands go,” Mikey said.

What Mikey isn’t talking about is how he’ll be able to carry all the weight that he’s put into the later rounds of the fight. He’s put on a lot of weight that he’s never carried before during his career. For a fighter that was already having stamina problems as far as 2013, Garcia is going to struggle if he gasses in the later rounds of the contest. The last thing Mikey needs is to fade against Spence in the championship rounds. If Garcia’s trainer doesn’t pull him out of the fight on an injury in the later rounds, he could take a real beating by Spence. Putting on weight is fine, but if you haven’t ever fought while carrying all the weight, then it could potentially end badly for Mikey if he loses his steam in rounds 9 through 12.

What Mikey has going against him in this fight, besides his lack of size, is his questionable stamina. What we’ve seen in Garcia’s recent fights against Sergey Lipinets and Adrien Broner is a fighter who tires out after six rounds, and goes into the coasting part of his game. Mikey took punishment against Lipinets after he faded after six rounds. Mikey’s stamina problems aren’t new though. They were disguised due to all the knockouts that he scored during his career. Against Orlando Salido, Mikey gassed out after six rounds, and started taking punishment in the sixth, seventh and eighth. Mikey’s trainer Robert Garcia pulled him out of the fight after the eighth. Mikey was slowly sinking at the time the fight was stopped. He was clearly on his way to getting knocked out by Salido if not for his trainer telling the referee that he was injured with a broken nose. Salido was disgusted with the stoppage, seeing it as a weak move on Mikey’s part, as he said he too had a nose injury, but he wasn’t going to complain about it to the referee.