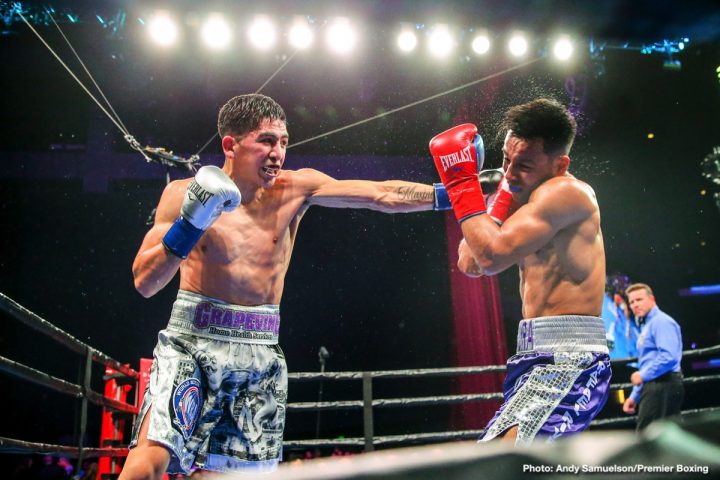 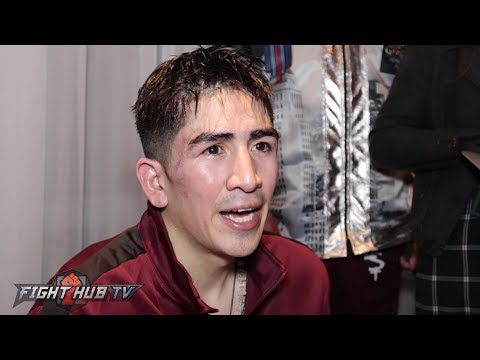 That’s an amazing out of shots for a fighter to throw, and it gives you an indication how this fight went. Santa Cruz, 30, wasn’t trying to load up with his shots. He was just throwing them to connect, and to keep the younger 24-year-old Rivera off of him, because he kept coming forward and attacking the entire fight.

Rivera was hopelessly over-matched from start to finish, but he never game up That’s one of the reasons why Santa Cruz was focusing on just throwing punches. Santa Cruz realized early on that he couldn’t hurt this kid no matter how much he loaded up on his shots, so he changed tactics in the second half of the fight by focusing on volume punching to keep Rivera busy having to defend.

It worked well for Santa Cruz. With him constantly shooting out jabs and weak arm punches, he was catching Rivera repeatedly with his punches. That was keep Rivera from being able to get in range to land his own shots. Santa Cruz, of course, was missing a lot with his punches, but he didn’t mind. His goal was to keep Rivera off of him, and he accomplished that goal with his high work rate.

Most of the punches Santa Cruz was throwing were jabs to the head of Rivera. The challenger Rivera had a lot of courage in walking through fire the entire fight to try and get to Santa Cruz. The constant pressure from Rivera had Santa Cruz looking plenty worried. 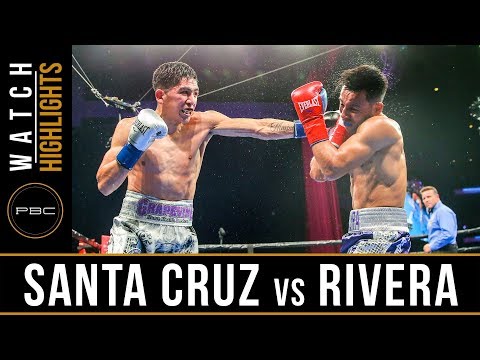 Santa Cruz vs. Rivera was one of those fights where the boxing public enjoyed while it lasted, but will instantly forget it afterwards. It’s like watching a slightly entertaining movie that fills a couple of hours of your time, but you instantly forget it afterwards because it wan’t a memorable one. Santa Cruz needs to face better opposition in the future for fans to be enthralled with his fights.

Rivera was the replacement for Miguel Flores, who Santa Cruz was supposed to be fighting tonight. Flores suffered an ankle injury while training and needed to pull put of the fight. It didn’t matter. Flores had lost 2 out of his last 3 fights just like Rivera had coming into this fight. It’s unclear where Santa Cruz’s promoters are searching for his opponents for him to defend his WBA title against.

You’d hate to think that Santa Cruz’s management is intentionally scouring the bottom of the World Boxing Association’s rankings at 126 in order to find guys that have no chance of beating him. Santa Cruz has taken on the best in the best like Carl Frampton and Abner Mares, but he’s stepped down from doing that lately.

Santa Cruz looked tired in the last three rounds in the 10th, 11th and 12th rounds from all the pressure that the game but limited Rivera was putting on him. Had this an opponent with some talent, power and hand speed, Santa Cruz would have been in deep trouble. There aren’t too many guys in the featherweight division that possess those qualities that can give Santa Cruz problems. One of them is WBC champion Gary Russell Jr., who Santa Cruz is interested in fighting, and the other is WBO belt hold Oscar Valdez. However, he’s with Top Rank Boxing, so it’s unlikely Santa Cruz will ever face him.

With the victory, Santa Cruz says he wants to unify the 126 lb weight class if possible. If not, he says he’s going to move up to super featherweight at the end of the year and go after world titles in the 130 lb weight class. You can argue that Santa Cruz should have already made that move a year ago, because all he’s doing now is facing lower level guys and/or retread opponents like Abner Mares.

Santa Cruz recently fought Mares for the second time last June. That was one too many for the likes of a lot of boxing fans in seeing Santa Cruz give Mares a pointless rematch after having already schooled him in 2015. If Santa Cruz moves up to super featherweight, he can be involved with some interesting fights against WBA champion Gervonta ‘Tank’ David, IBF champion Tevin Farmer, WBA ‘regular’ champ Andrew Cancio, WBC champion Miguel Berchelt and WBO belt holder Masayuki Ito.

If Santa Cruz can’t get any of the other champions at featherweight to face him in a unification fight, then he needs to move up to super featherweight to go after the bigger fights in that division. It’s not worth it for Santa Cruz to be burning up his career fighting the lower level guys at featherweight in milking his WBA title. Miguel Flores and Rivera din’t deserve title shots unless you count losing 2 out of your last 3 fights as a method for earning a crack at a world title.

It’s unclear where Rivera goes from here. It’s going to be hard for Rivera to earn another world title shot, because he’s struggling against the better fighters in the division now. If Rivera can’t even beat contenders at 126, then he’s not going to be able to earn a title hot to face one of the champions anytime soon.