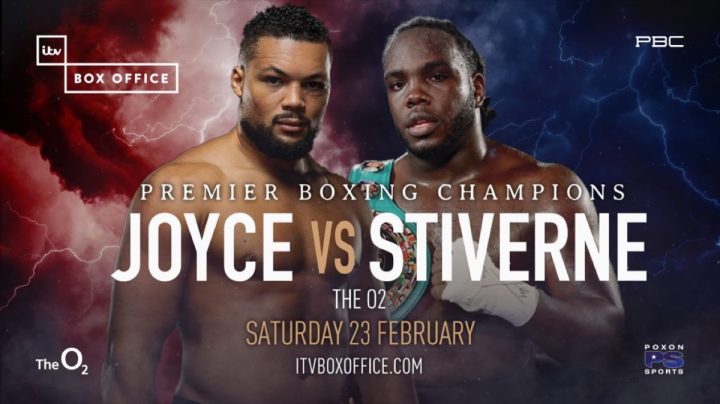 By Jeff Aranow: Heavyweight contender Joe Joyce (7-0, 7 KOs) says he’s going to treat former WBC heavyweight champion Bermane Stiverne (25-3-1, 21 KOs) this Saturday on February 23, like he did Ian Lewison in beating him by an eighth round knockout. Joyce says he sees the 40-year-old Stiverne as being a similar fighter as the 6’2″ 260+ pound Lewison, who he made his pro debut against two years ago in October 2017.

Joyce vs. Stiverne will be fighting as the chief support on the James DeGale vs. Chris Eubank Jr. card on SHOWTIME Championship Boxing at the O2 Arena in London, England. The DeGale-Eubank Jr. card will start on SHOWTIME at 3:45 p.m. ET/12:45 p.m. PT.

This fight is a showcase for 2016 Olympic silver medalist Joyce to show off his talent in front of the American and UK fans before he eventually fights for a world title either this year or in 2020. Joyce’s goal is to win a version the heavyweight titles. He’s currently ranked #5 by the World Boxing Association, which suggests that he’s going to be going after WBA ‘regular’ champion Manuel Charr to take that belt before looking to take on the likes of IBF/WBA/WBO champion Anthony Joshua and/or WBC champion Deontay Wilder for their belts.

Stiverne was selected by Joyce’s promoters to give him a name fighter that can prepare him to take on the world champions in the near future. Joyce sparred with Stiverne twice a couple of years ago, and he said he was lazy and lethargic during the sparring sessions. Joyce was later surprised to hear Stiverne saying that he had taken him to school during the sparring sessions, which he says not true. Joyce said it was he that got the better of Stiverne during the sparring. Whatever the case, the two fighters will be fighting this Saturday night, and the boxing fans at the O2 Arena will get a chance to see for themselves who the better man is.

Joyce fought the entire fight against Lewison using just his left hand, and was able to still stop him. It appeared at the time that Joyce was nursing an injured right hand, as he only rarely used it during the fight. When Joyce did throw with his right, he wasn’t putting any power in the shots. He was throwing only to the body with that hand.

“I started with Ian Lewison. I guess he’s similar to Bermane,” Joyce said to IFL in comparing former WBC heavyweight champion Stiverne to the domestic level fighter Lewison. “I’m just going to have to deal with him the same way like that [in knocking him out in the eighth round]. It took me eight rounds. I think it’ll be similar for Bermane Stiverne,” Joyce said.

There’s a big difference between Ian Lewison and Stiverne. Although they’re both built the same way, Stiverne is a much better fighter than Lewison. Joyce might be making a mistake in selling Stiverne short in believing he’s not a good fighter. Joyce would have his hands full if he fought the version of Stiverne that twice defeated Chris Arreola. That was a younger Stiverne, who had heavy hands, and was capable of walking through big shots in order land his own big punches. Joyce would have his chin checked repeatedly by that version of Stiverne. If Bermane has somehow gotten himself into the kind of condition he was for his two fights with Arreola in 2013 and 2014, we could have an interesting fight on Saturday night.

Without question, the 33-year-old Joyce is old enough to take on the tougher fighters in the heavyweight division. If not now, then when will Joyce be ready. Unfortunately for Joyce, he got a late start to his pro career, so he cannot afford to spend 10 years slowly working his way up the heavyweight ranks the way a lot of fighters do when they turn pro. If Joyce were to go on the same 10 year plan, he wouldn’t be fighting for a world title until he’s 41-years-old. That’s too old for Joyce to be fighting for a world title the first time. George Foreman captured a heavyweight world title at age 45 in 1994 in beating Michael Moorer, but he was an Olympic gold medalist, and he’d already won a heavyweight world title earlier in his career in 1973.

“It would be a good fight for me,” Joyce said of fighting Luis ‘King Kong’ Ortiz after the Stiverne fight. “We spoke to his team. So we had the fight lined up; maybe for the end of this year, we could potentially fight if all goes to plan if I keep winning, and I don’t get floored by Bermane Stiverne on Saturday night. It’s a potential fight,” Joyce said.

Joyce’s trainer Abel Sanchez gave an interview this week in saying that he rejected Luis ‘King Kong’ Ortiz as an opponent for him, as he felt he wasn’t ready. Sanchez say Joyce needs more experience before he takes on former heavyweight world title challenger. If Joyce is serious about wanting to fight the 39-year-old Ortiz in his next fight, it could be interesting to see what Sanchez has to say about it. If Sanchez is able to block the Ortiz fight from happening, then his promoters at Ringsports are going to need to find someone else. Joyce should be able to beat WBA ‘regular’ heavyweight champion Manuel Charr without needing to defeat Ortiz. A victory over Ortiz would definitely assist Joyce in getting moved up in the WBA’s rankings. Ortiz has only been beaten once as a pro, and that was by WBC champion Deontay Wilder last year.

Stiverne has several things going against him in this fight. First off, he hasn’t fought in a year and a half since his first round knockout loss to WBC heavyweight champion Deontay Wilder in November 2017. Secondly, Stiverne looks heavy, like he’s still carrying around a lot of excess baggage on his frame. Thirdly, the fight is taking place in the UK where the boxing fans will be rooting for Joyce. Stiverne won’t be getting much love out there on Saturday when he gets inside the ring. Stiverne had said that he was going to work hard for this fight to get in really good shape. If Stiverne did indeed put in a lot of effort at trimming off the weight during training camp, then perhaps he should have started training before he started his camp. When a fighter gets really heavy, it take a little longer to burn off the weight. Look at Tyson Fury. It took him six months of training to get his weight down just to start a training camp to begin his comeback after being out of the ring for 2 1/2 years. Even after three fights, Fury is still slowly losing the remainder of the weight. It takes a long time for a fighter to lose weight when they get really heavy. It’s unclear how heavy overweight Stiverne was before he started his recent training camp, but it wouldn’t be surprising if he was at least 40 lbs over his old fighting weight in the 240s.

Former IBF super middleweight champion DeGale (25-2-1, 15 KOs) and Chris Eubank Jr. (27-2, 21 KOs) will be looking to settle their differences in this long awaited fight between them. The two of them have had bad blood for a long time now, and finally they’ll get the opportunity to settle things once and for all inside the ring. A lot of boxing fans are predicting a victory for Eubank Jr., 29, based only how poor DeGale has looked in his last few fights. DeGale has been slow in coming back from shoulder surgery. It’s taken more time than expected for DeGale to regain his form since the injury. DeGale, 33, looked much improved in his last fight in stopping Fidel Monterrosa Munoz in the 3rd round last September. In his two previous fights, DeGale had labored against Caleb Truax in losing the first contest between them in December 2017, and then coming back to beat him by a 12 round unanimous decision in their rematch last April. Both fights looked likes losses for DeGale, just the first. DeGale did look a lot better in beating Monterrosa Munoz last September, which is a good sign for James.


« Caleb Plant Joins Ray Mancini for Dirrell vs. Yildirim this Sat. on FS1