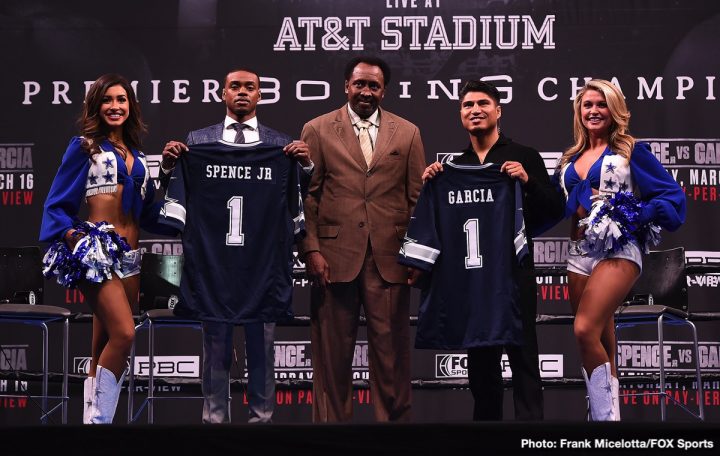 Unbeaten welterweight world champion Errol Spence Jr. and undefeated four-division champion Mikey Garcia previewed their upcoming showdown and faced-off live on FOX at a press conference in Los Angeles Saturday as they near their battle for pound-for-pound supremacy that headlines a Premier Boxing Champions on FOX Sports Pay-Per-View event on Saturday, March 16 from AT&T Stadium in Arlington, Texas.

Spence and Garcia were joined on stage at the press conference by a living legend, Thomas “Hitman” Hearns, who won titles in five weight divisions and fought Sugar Ray Leonard in one of the most memorable welterweight fights in history.

The event also featured an interview via satellite with Dallas Cowboys Owner, President and General Manager Jerry Jones, who shared his thoughts on the electrifying event coming to AT&T Stadium, before Spence and Garcia were gifted personalize Cowboys jerseys by two Dallas Cowboys cheerleaders.

Tickets for the March 16 event, which is promoted by TGB Promotions and Ringstar Sports, are on sale now, and can be purchased at SeatGeek.com, the Official Ticketing Provider of AT&T Stadium.

Here is what the press conference participants had to say Saturday from Microsoft Theater at L.A. Live:

“I train old school so I don’t worry about how Mikey is planning to get stronger at the weight. I’m not worried about it and I don’t think it will make a difference in the fight. I’m just going to focus on what I have to do to be at my best.

“Size always matters, but when you get in there, at the end of the day, it’s about skills and intelligence. I’m not going to rely on size. I’m going to focus on my talent. If I can roll through him, then I’ll show my killer instinct and try to get him out of there. I’m going to use my ability to break him down.

“At first I thought he was just chasing my name when he was calling me out. Once it became real, I saw how serious he was. At that point I was very confident it would happen.

“I’m not the bully here because Mikey really pushed for the fight. The other champions weren’t available at the time, plus Mikey is the only top fighter who called me out. I knew this was a fight I wanted.

“Mikey is undefeated, has a great skill set and has won a title at 140-pounds. I don’t see him as that small a fighter. He has a technical style that’s very traditional. He likes to use angles to set his opponent’s up.

“We’re focused on what I can do and what our game plan is. I always spar the same people no matter what because they get me into the condition I need to be in and they have me primed for any challenge.

“The welterweight division has always been one of the strongest divisions in the sport and it is like that now. We just need to fight each other. I’m ready to fight any of them. Whoever ends up on top from this group, will end being a Hall of Famer. That’s how you become an all-time great.

“This is something I’ve been waiting for my whole life. I’m focused and prepared for this challenge. It’s going to be all eyes on me and Mikey in that ring and I can’t wait.

“I’m happy that someone is challenging me. I’ve been looking for an opponent like him. He’s established himself in this sport. I’m happy to be able to take on this challenge. I’m looking for a skillful Mikey Garcia to bring the best out of me on March 16.

“My vision is that my hand will be raised in victory, whether it’s a knockout or a 12-round grueling fight, I’m preparing for the best Mikey Garcia skill wise, strength wise and as far as his ring intelligence.”

“These are the kinds of challenges I want. I need someone like Errol Spence Jr., with his demeanor and style, to bring the best out of me. I want the world to finally see the full Mikey Garcia.

“The training that we did in the Bay Area definitely helped me. We are going up in weight and needed to do a different type of training. We wanted to make sure that we gained a little bit of mass so that I can be able to hold off Errol Spence’s weight and strength.

“The key to my strength training was that we didn’t want to lose my speed and explosiveness. I can see now that I’m back in sparring that I still have that speed while also gaining the muscle we had to.

“If people say Errol is bigger, that’s just obvious. But who’s faster? Who has better timing? There’s a lot more that goes into this sport and who’s going to win this particular fight.

“This has been one of the toughest camps I’ve ever had. We’re working on a lot of different methods and techniques to be at our very best. He’s going to be bigger than me on fight night, but that’s part of the challenge. I’ve know that since the beginning and that’s why we’ve trained the way we have.

“When I saw him fight Lamont Peterson I decided that Errol Spence Jr. was the fight I wanted one day. People tried to talk me out of it, but now they’re all on board. People have now started to see what I’m going to be capable of on March 16.

“I want the best Errol Spence Jr. I know he’s a great fighter with a lot of skills and talent. He hasn’t needed to use all of his skills, just like me. He does everything well, but nothing spectacular. I just feel like I’m the better fighter. I think I have the advantage everywhere except maybe power, but we’ll find out on fight night.

“This is history in the making. I’m trying to establish a great legacy. This is the kind of fight that I need. I know my fans are going to show up and give me a lot of support. This fight truly excites me and motivates.

“Even though some people believe I’m the underdog, I don’t see myself that way. I’m undefeated and I think Errol knows that I pose a challenge. It’s no easy task for either one of us. This is the fight that I need for my legacy.”

“This fight is all about the skillset, not the size. Size will come into play a little bit, but we’re going to show the skillset that we have to beat this guy. That’s what Errol is going to show.

“Mikey Garcia has a good technical style. But there’s always a method to take down a great fighter. I think that a day like today will inspire us even more to work even harder. We can see him right in front of us. Its real and we can’t wait.

“When I first saw Errol we were actually sparring each other. We started working together and I got to see him walk through guy after guy. We knew he was a great athlete, but it took time to build to where I started to realize he was something special.”

“This is a big challenge for us to go up in weight to fight the best welterweight in the world. But it’s not like its’ never been done before and I know Mikey has the skills and power to pull it off. That’s what we’re coming to Dallas to do.

“This is an opportunity for Mikey to continue building his legacy. He wants to be known as one of the greatest fighters of all time and a win over Errol Spence Jr. is a big step toward that.

“I don’t think they’ve overlooking Mikey. “They know the talent he has. They’re getting ready for a great fight like they’ve done before. I think they know that they’re in for a real fight.”

“I’m back here in this stage and that’s all that matters. I’m living and learning. I can’t wait to be in position to again fight for the world title.

‘I actually sparred with J’Leon Love when I was 15-years-old. He’s a great fighter who’s a veteran. I’m not overlooking him. I’m training for this fight like it’s a world title fight. Whatever style he comes with, I’m going to be ready for it.

“I’m better than ever. Everything has been a lesson learned. I had to sit out while I lost my spot, so now I’m more motivated than ever. This year we’re leaving the past in the past and coming back stronger.”

“I’m excited to be back. It was a long layoff where I spent time with my son and watched him grow. I missed that feeling of being in front of fans and getting that nervous energy right before a fight.

“I’m anticipating and I’m hoping for a rowdy crowd on March 16. There will be a lot of Spence and Garcia fans and a whole lot of great fights. Us Mexicans, we love fights.

“I know that my opponent is a southpaw and he’s slick. He’s going to try to out box me. I know he’s not going to want to stay in my wheelhouse. I have to be in shape to go the distance and be ready for shots coming from different angles.”

On hosting Spence and Garcia at separate Cowboys home games last season:
“It was just good to rub elbows with champions. I want all that they have to rub off on me and the Dallas Cowboys.

“The fact that FOX is involved and their interest in this fight is amazing. We’ve had great events with FOX, including the Super Bowl. Our stadium was really built for boxing. These fighters will be standing 70 feet tall suspended above the ring on the video board. It’s an excellent way to feel like you’re so close you’re receiving the blows from these great fighters.

“We’re so excited for our Mexican-American fan base. This is a great area for boxing. We endear ourselves to be involved with an event like this in anyway the Cowboys can. Especially with two great fighters like Spence and Garcia.

“I think you’ll see a fight with outstanding champions involved on March 16. You don’t get to see the best against the best very often. At AT&T Stadium, you’ll see it in a way that can’t be matched at normal sports venues. The aura of having thousands of fans like at a football game is unmatched. It’s a grand experience and we’re proud to be a part of boxing.”

“The winner of this fight will be pound-for-pound the best in the world. Everybody would agree both of these guys are near the top of that list, and I believe whoever wins will be number one. This is a coronation for who is today the king of the sport.

“Mikey Garcia is technically one of the best fighters in the world. Errol Spence Jr. is a strong, determined fighter who just wants to prove that he’s the best. This fight is a chance for both guys to prove they’re the best in the world.”

“This is a true blockbuster event, worthy of this incredible press conference live on FOX. These two fighters are not only superstars of the sport, but the winner of this fight will be able to make the claim of being number one pound-for-pound.

“FOX and the Dallas Cowboys have given a tremendous amount of support to this event and we anticipate an unforgettable evening on March 16. Mikey Garcia is truly daring to be great against a fighter in Errol Spence Jr. who has established himself as the class of the 147-pound division.” 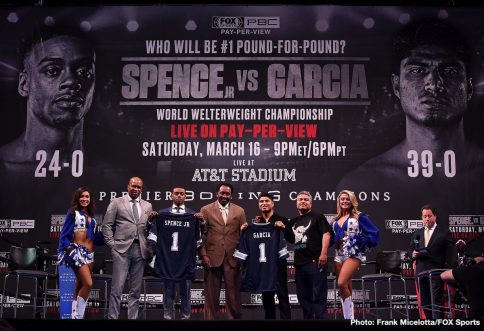 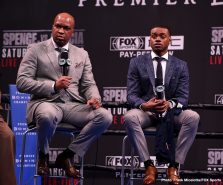 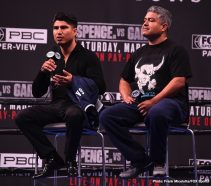 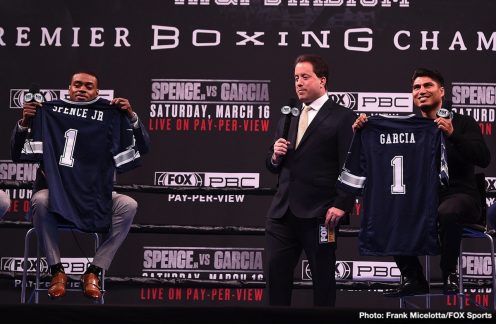 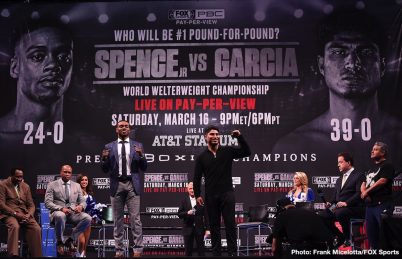 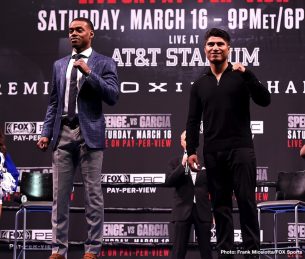 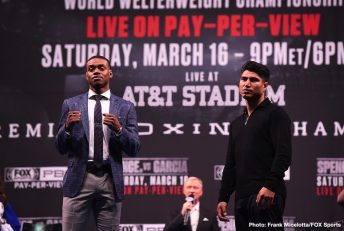 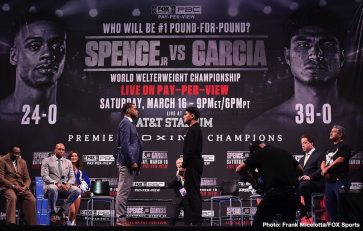 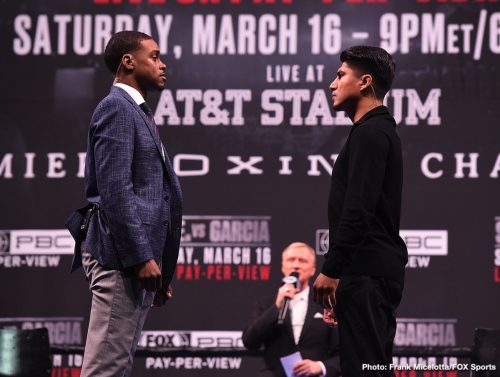 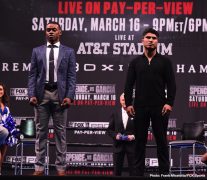 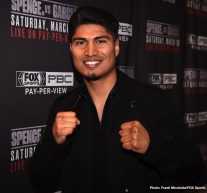