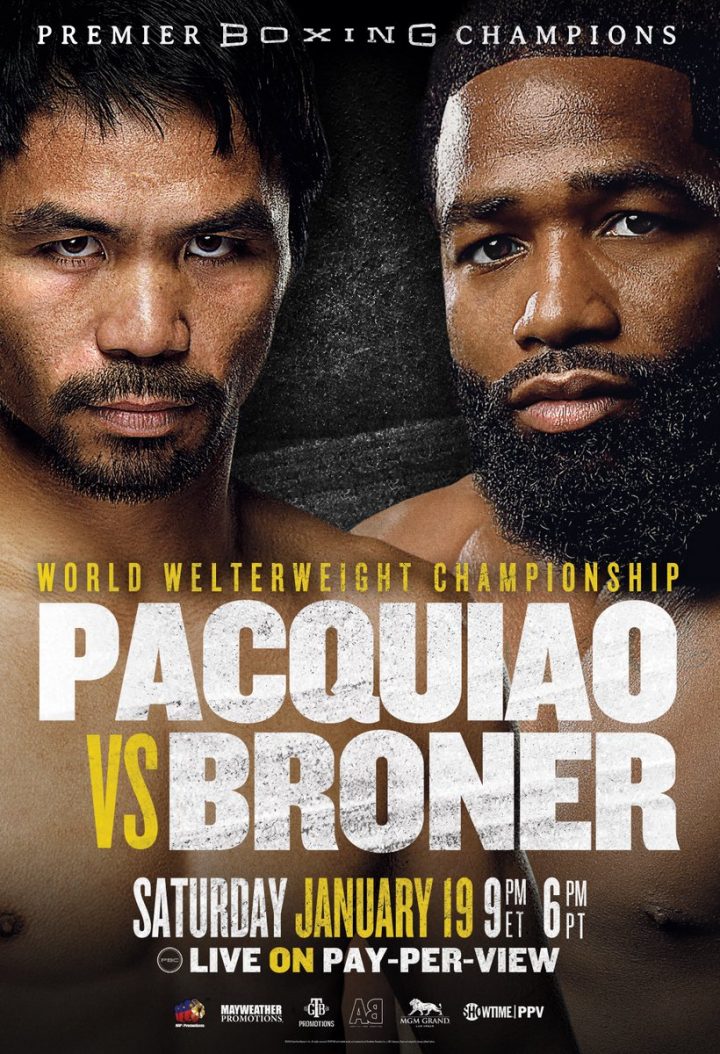 By Mike Smith: WBA World welterweight champion Manny Pacquiao (60-7-2, 39 KOs) is looking fast as ever in preparing for his maiden title defense of new World Boxing Association ‘regular’ title against Adrien ‘The Problem’ Broner (33-3-1, 24 KOs) in 13 days from now on SHOWTIME PPV at the MGM Grand in Las Vegas, Nev. The hand speed the 40-year-old Pacquiao has been showing in training is that of a guy many years younger than his chronological age.

There are fighters in their early 20s at welterweight that don’t possess Pacquiao’s hand speed. Pacquiao is still one of the fastest fighters in the 147 pound division. He’s certainly faster than the top elite guys at welterweight in Keith Thurman, Errol Spence Jr., Shawn Porter, Terence Crawford and Danny Garcia. The only guy that rivals Pacquiao’s speed in the top 15 is perhaps Amir Khan, but he’s seen more as a flawed a welterweight with flaws in his game due to his shaky punch resistance, and his stamina problems. Khan is still very fast, but he’s not been able to use his speed to excel in boxing the way Pacquiao has.

Gone are the days where Manny was just interested in pounding out a 12 round decision over his opponents. Pacquiao now wants knockouts, and that’s his plan for the Broner fight. ‘Pacman’ wants to knock the 29-year-old Broner out.

Broner has a lot of legal problems that he’s dealing with right now, and you have to wonder if he’s distracted by everything that’s going on with his life outside of the ring. This Monday, January 7, Broner has two court cases in two separate states that he’s got to deal with, according to TMZ. Additionally, Broner has a court case on January 23 as well. It’s unclear what the outcome will be for Broner with his legal problems, but it’s got to be tough for him to stay focused on the task at hand in getting ready for an important fight against Pacquiao. If Broner wins this fight, he’ll have turned his career around, at least temporarily, by beating former eight division world champion Pacquiao. Winning that fight will make Broner the new WBA secondary welterweight champion, and likely ensure that a rematch between him and Pacquiao takes place. This is a voluntary defense for Pacquiao, so he’s likely got a rematch clause in the contract that he can use in case he gets beaten by #6 WBA.

Pacquiao had this to say on his social media site on last Saturday:

“My WBA Boxing welterweight world title defense against Adrien Broner is 14 days away. I am training hard for a knockout vicory. It is great to be back in the U.S. and fighting at MGM Grand Garden. @PBC @TGBPromotions @ShowtimeBoxing @SHOSports @AXS #PacquiaoBroner.”

It’ll be a big shock if Broner wins this fight. It’s more likely than not that this is a match that is going to end with the same result as Broner’s fight with Marcos Maidana in December 2013. Broner was knocked down twice by Maidana in getting dropped in round 2 and 8 in that fight, which he lost by a 12 round unanimous decision by the scores 117-109, 116-109 and 117-111. In some respects, that lost signaled the beginning of the end for Broner as a top flight fighter.

Although Broner would later capture the WBA World light welterweight title in April 2016 in beating Ashley Theophane by a ninth round knockout, he’s not been able to regain the hype that he had before his loss to Maidana. Broner was on his way to super stardom before his fight with Maidana. Things haven’t been the same since that fight. There’s been a lot of unfulfilled potential with Adrien.

Some of that is a result of Broner not dedicating himself to boxing the way he needed to for him to be get the most out of his career. But it’s likely that even if Broner had focused 100% on boxing in living and breathing it 24/7, he still would have had problems of mixing it with the best. Light welterweight and welterweight are not good divisions for Broner. By far, Broner’s best weight classes are super featherweight and lightweight. If he had more dedication, he perhaps could have kept his weight low enough to this day to still fight in the 130 and 135 lb weight classes. Broner would be a tough guy for anyone to fight at super featherweight and lightweight if he wasn’t drained in making those weight classes.

Pacquiao’s age is advanced for boxing, but he still has his hand speed. His hand speed so incredibly good during the prime of his career, which wasn’t that long ago, that he’s still above the norm even though he’s lost some of his speed. Unlike Roy Jones Jr., who lacked good boxing fundamentals help him stay on top once he started losing speed, Pacquiao is a skilled fighter and he’s still able to win even though he’s slowed down a little. The real test for Pacquiao is when he gets inside the ring with a top welterweight like Errol Spence, Keith Thurman, Shawn Porter, Danny Garcia or Terence Crawford. Broner isn’t one of the elite welterweights. He’s clearly a fringe level fighter at 147. Broner has nice skills, but his foot and hand speed and size aren’t what they need to be for him to be at the top with the likes of Spence, Crawford, Thurman, Porter and Garcia. Pacquiao’s recent seventh round knockout victory over Lucas Matthysse was a good victory, but it wasn’t a significant enough win to say that he can compete with the best in the division. Matthysse, 36, was old, dealing with inactivity, and fighting in a division above his natural weight class of 140. Beating Matthysse didn’t prove that Pacquiao can hang with the talented young fighters at 147. Broner isn’t talented enough for Pacquiao to get credit from the boxing world if he beats him.

The boxing public generally believe that Pacquiao is going to beat Broner on January 19, and it won’t be a competitive fight. Broner is going to need to prove the fans wrong, but it doesn’t appear that he’s going to be able to do that. Broner’s body language at the news conferences with Pacquiao is that of a guy that is badly lacking in self confidence at this point. Broner seems to realize that he’s facing guy that is out of his league, and that this fight could go very badly for him. Broner knows himself that he’s failed to produce in his last three fights against Jessie Vargas, Mikey Garcia and Adrian Granados. Broner appeared to lose all three of those fights, but he was given a win over Granados, and a draw against Vargas. Mikey beat Broner by a one-sided 12 round unanimous decision last year in July. The last good performance from Broner was three years ago in his ninth round knockout win over Ashley Theophane in 2016. That fight is ancient history. It was so long ago, and Broner was fighting a guy that hardly deserved to be fighting for a world title in Theophane.

Broner seemed to pattern his fighting style from his mentor Floyd Mayweather Jr. Unfortunately for Broner, he lacked Mayweather’s physical skills. It wasn’t enough for Broner to just mimic the way Mayweather fights. He didn’t has his speed, reflexes, and hasn’t trained like him.

What happens with Broner’s career if/when he loses to Pacquiao is the question that a lot of boxing fans want to know. Will Broner retire from the sport if he loses by a knockout or a one-sided decision to Pacquiao or will he fight on? A loss for Broner against Pacquiao would put his record in his last four fights at 1-2-1. Since Broner’s win over Adrian Granados in 2017 was seen as loss by many boxing fans, you can say that his record should be 0-3-1 after his fight with Pacquiao. That’s a record that suggests that it’s time for Broner to hang up his gloves. At the very minimum, it’ll show that Broner’s days as useful B-side player for the big names are numbered.