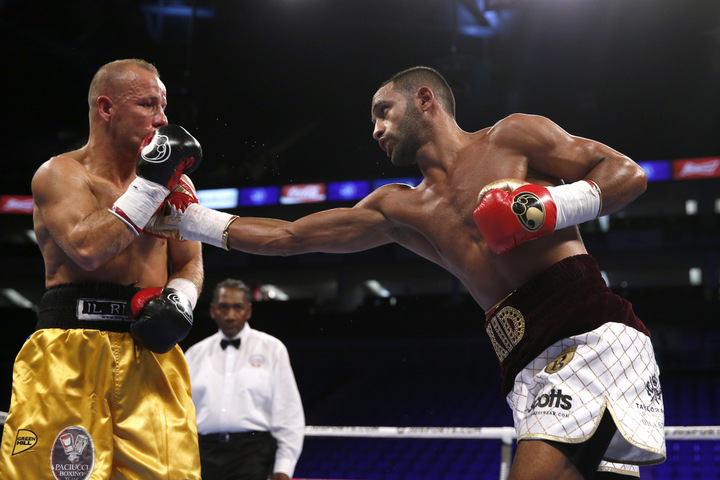 The victory over Clary made Galahad the mandatory for Warrington, but the International Boxing Federation still hasn’t ordered the fight. Without the IBF ordering Warrington to face Galahad, he doesn’t need to. There’s no urgency there.

Warrington has a lot of options for important fights after his solid 12 round unanimous decision win over Carl Frampton (26-2, 15 KOs) last month on December 22 in Manchester, UK. Warrington’s high energy attacking style was too much for Frampton, who looked exhausted in the later rounds of that fight. Warrington ultimately won the fight by the scores 116-113, 116-112 and 116-112.

“Hopefully Josh gives the fans what they want now and let’s have an all-British showdown,” Galahad said to skysports.com. “It would be a great build-up and then a great main event too.”

Galahad is a good fighter, but he’s not viewed by boxing fans as being as good as his number one ranking with the IBF. There are arguably better contenders in the 126 pound division than Galahad, but those guys are ranked #1 by the IBF. Sanctioning bodies have their reasons for giving fighters high rankings. It’s unknown what went into the decision making with the IBF for them to rate Galahad as their #1 contender rather than the likes Abner Mares, Joseph Diaz, Shakur Stevenson, Jessie Magdaleno, Scott Quigg or Genesis Servania. Some of those guys would give Galahad major problems. None of them would be easy fights for Galahad, and there’s a chance that he would lose to all of them.

Warrington’s career is looking good right now after his wins over Frampton, Lee Selby, Dennis Ceylan, Kiko Martinez, Patrick Hyland, Joel Brunker and Hisashi Amagasa. Warrington has looked nothing short of sensational in his last seven fights. His promoter is obviously going to want to keep his momentum going by putting him in the right fights. Galahad, who can be bit of a spoiler, might not be the right guy for Warrington at this point. In terms of pure entertainment value, Warrington would do well facing someone like Lee Selby in a rematch or defending against Shakur Stevenson. Those would be good matches that would interest boxing fans. Many people thought Warrington was going to lose his last two fights to Frampton and Selby. Warrington proved those fans wrong in beating both guys soundly.

Galahad is coming off of an eight round points decision win over journeyman Brayan Mairena (10-5-1, 4 KOs) on December 8. This was a stay busy fight for Galahad. He’d already earned the IBF mandatory spot in beating Clary in his previous fight, so there was no need for him to take a risky fight against a top contender that would potentially jeopardize his position. Galahad has decent pop in his punches, as his 58% KO percentage would show you, but he doesn’t possess the kind of power of Warrington’s past opponents Frampton and Kiko Martinez, to name just two. Galahad is not a big threat to beating Warrington on power alone. It’ll take high degree of boxing skills for Galahad to beat Warrington, and a great engine as well. It doesn’t appear that Galahad possesses those qualities to his game.

“Warrington would definitely have a different fight against me. I’m a very different fighter to Carl. Stylistically first and foremost but also size, power at the weight class and my fitness and engine,” Galahad said.

Frampton would be a really tough fight for Galahad, and it’s doubtful that he would beat the Irish fighter. It would be great for the boxing fans to see Galahad earn the title shot against Warrington properly by taking on a quality fighter like Frampton. Clary is a decent fighter, but he’s not at the same level as the likes of Frampton and some of the other aforementioned contenders. Galahad earned the #1 spot with the IBF, but he did it the easy way by beating a flawed fighter that always going to be beatable.

Galahad’s promoter Eddie Hearn of Matchroom will need to push hard to make the Warrington fight. There are a lot of obstacles in that could prevent the Warrington vs. Galahad fight taking place anytime soon without the IBF ordering the match.