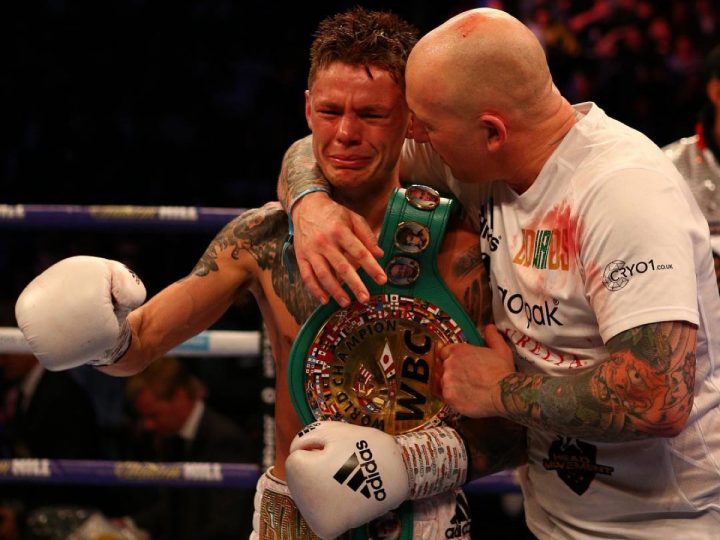 Exclusive interview by Ian Aldous: On December 22nd, a true Christmas fairy tale took place when Croydon’s Charlie Edwards (14-1) achieved his dream and became WBC world flyweight champion after dethroning Cristofer Rosales (28-4) over twelve rounds at the O2 Arena in London. Such an accomplishment seemed a long way off following his failed world title bid in 2016, but copious amounts of hard work in the gym and instilling belief in his mind helped him keep a promise to his ailing mother and reach the very top of the 112 pound division. Earlier this week, Edwards took some time to talk with me over the phone about his championship victory and the potential of collecting more belts in 2019.

IA: Congratulations on becoming WBC world flyweight champion. Has it sunk in yet, champ?

CE: It hasn’t. I’ve been in the gym and back running, just getting back to the same things. The only thing that’s changed is the amount of people who are noticing me and want to arrange things with me. That’s the only thing that’s really been overwhelming for me, and because I’m humble and down to earth – I try to speak to everyone and it’s so hard to keep up.

IA: Looking back at the fight, Rosales held a five-inch reach advantage over you, but didn’t seem to utilize it, were you surprised his jab didn’t cause you more problems?

CE: No. We knew he had the reach advantage and that’s why we brought in the sparring partners which we did, (we) made sure they were tall, long. I’m a believer that boxing is all about timing and I could use his big reach to a negative effect for him. I can get him to jab from distance and when he misses then I can get in and out with speed and it was the speed he struggled with. Because of the way I boxed, taking that half-step back every time, he’d think he was in range, hesitate, and before he’d thrown – I’d be out.

IA: Rosales not so long ago went to Belfast and crushed Paddy Barnes. Were you impressed with his performance that night and did you know then that he could be your next opponent?

CE: I sat there and watched it and I was thinking, ‘I can beat this guy’. I had a feeling, inkling, then that I might fight him and I was like, ‘I want that’. He put in a very good performance against Paddy but it was nothing I didn’t expect him to do to Paddy Barnes. With him (Rosales), you have to be able to outbox him and be fit enough to do it at a high pace for the whole twelve rounds. A lot of these fighters are not actually fit enough to move and work for twelve rounds. That’s when these tough guys like him get to you.

IA: That’s very true. He seemed to put more pressure on you in the last few rounds. How hard was it to keep fully concentrated for the full thirty-six minutes? You can’t afford any mistakes or lapses in concentration against someone like him.

CE: After the cut, then it was fine. I knew he was going to come (at me) all night long, but I love that as a fighter. I love to be on the edge of my seat and not switch off. It’s a challenging thing for myself. At any time, if I switch off, he can land a big right hand and put me to sleep, so – don’t do that! That’s what I thrive on – being under pressure.

IA: As early as round two, it felt as though you were in control of the fight. Did it feel that way to you?

CE: 100%. The first round, I was cautious and I wanted to go out and feel him and his power, taking them (shots) on the gloves, get the judge of his distance and how he was going to go about the fight. It’s a twelve round contest and I got his rhythm very quickly and started going through the gears.

IA: Did we see the best possible Charlie Edwards that we could have seen on December 22nd?

IA: I think you seemed a different fighter against Anthony Nelson (Edwards’ fight prior to December 22nd). That really made me stand up and take notice of you.

CE: Massively. Since I’ve been working with Grant Smith (trainer) at the Steel City gym, he’s really developed my style and changed me. I can’t thank that man enough. I’ve been with quite a few trainers and it’s took me a while to get where I needed to be and now I feel loved and 100% dedicated. He’s such a clever man, he’s a proper tactician and he’s obsessed just like me as a boxer.

IA: There’s already been talk of unification with IBF champion, Moruti Mthalane. Is that likely to be next?

CE: I suppose once Eddie (Hearn) gets back off his holiday, we’ll sit down and talk. It could be. I want it to be and he wants it to be, so why not? Let’s make it happen.

IA: The current No.1 contender with the WBC is Andrew Selby, a man who has also defeated Cristofer Rosales, do you think he deserves his shot at you and your title?

IA: That’s the attitude to have when you become a world champion because a lot of guys don’t seem to.

IA: That leads nicely into my next question. Despite being in a weight-class higher, current WBA super-flyweight champion, Kal Yafai struggled in his last title defence, whereas you’re seemingly improving a lot. Is that a fight that interests you?

CE: Very much so. Beforehand you could see all over Youtube, I called him out at the ‘British Beef’ card and I wanted him then. His biggest mistake is that he’s leaving it too late and I’m only going to keep getting better. It’s definitely a fight that’s going to happen and I can’t wait for it to happen. It’ll be a very big fight on Sky Sports. You don’t get big money fights down at flyweight, but two Brits, on Sky Sports with Eddie’s backing. You’d be a fool to say no and the only reason you would say no is if you wasn’t confident in winning.

IA: After that first world title shot in 2016 against John Riel Casimero, (TKO loss for the IBF flyweight title) it must have felt like a negative experience, but in hindsight do you see it as a positive experience?

CE: I don’t think I did (see it as a negative). When I went in to that fight, I’d like to believe that I thought I was going to win it, but I took it as a ‘win-win’ situation. I didn’t care about my record, records are for DJs. If I won, I would have made history. If I get beat, my profile and platform is raised – I fought for a world title, which is something a lot of fighters never fight for. After I got beat, I was down in the dumps, but after about two weeks, I just moved on with it. It was the best thing that ever happened. You look at Casemiro and his record; he jumped into a world title fight at the same age as me early on in his career and got beat. In the flyweight division, you can’t say no (to world title fights). You’ve got to go through some shit to be a great. Look at the olden times, Ray Leonard, Roberto Duran, they done it properly.

IA: They all lost fights.

CE: Exactly. Too many people want to emphasize on their ‘0’ because of the new era of being this perfect human being. It’s not real. Even though I got beat, look at my story now, people like that because they realize that it’s OK to fail but keep working hard and you can get there. Nothing’s impossible.

IA: How much of an inspiration has your mum been on your road to becoming a world champion? I believe the Rosales bout was the first she’s been to since your debut?

CE: Yes it was. She’s been a massive inspiration. Me and my brother have said goodbye to her about three times. It’s been such an up and down roller-coaster with my mum. She said to me, ‘ promise me one thing, you will never give up on your dreams, no matter how bad I get, never give up because one day you will become a world champion’. That gives me goosebumps now when I think about it. The week of this fight, she was in hospital with a urine infection, which made her go a bit doolally, but they were thinking it could have been another bleed on the brain and my sister kept it from me, but I knew something wasn’t right because she’d been in hospital for so long. I’d programmed myself to think, ‘she won’t be there’. Because of the past, I knew how to deal with it better. Four days before the fight, she got let out of hospital and she was definitely coming to the fight. I nearly cried at the press conference. It’s been a very emotional time for us. To do that (win the title) for her, that’s why I just broke down.

IA: You’re not the only fighter in the family. Your unbeaten younger brother Sunny is making waves in the 115 lb division. Can he be as good as you?

CE: He’s better. He’s a very special fighter. When he comes back (he’s currently injured), he’s going to be even hungrier and he’ll want it even more. He ain’t in a rush to get a world title shot, he could probably have one in the next few fights, (but) learning from my mistakes, he doesn’t need to do that. He don’t need to risk that because he’s having hard fights. He’s having the right fights at the right time and he’s going from level to level.

Jose Uzcategui vs. Caleb Plant next Sunday, Jan.13 on FS1 »