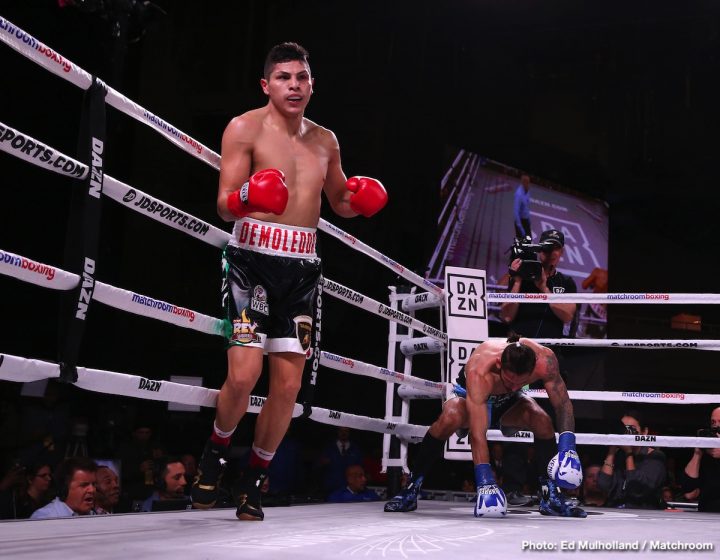 By Dan Ambrose: In a shocking upset, journeyman Pablo Cesar Cano (32-7-1, 22 KOs) destroyed former three division world champion Jorge Linares (45-5, 28 KOs) by a first round knockout on Friday night in a scheduled 10 round fight at light welterweight on DAZN at Madison Square Garden in New York.

The younger and bigger 29-year-old Cano knocked Linares down three separate times with big right hands to the head. Moments after the third knockdown, the hard Mexican puncher Cano staggered Linares with a hard right hand to the head that caused him to back up to the ropes. Referee Ricky Gonzalez then stopped in and halted the fight to prevent Linares from getting dropped for a fourth time. The official time of the stoppage was at 2:48 of round 1.

“He hurt me with a big right hand, and he’s a puncher,” Linares said after the fight. “He surprised me with his right hand. It’s difficult. Five pounds is different. It’s a big difference. His body is bigger. He has a big punch. I’m going back down [to lightweight]. He surprised me with the big right hand. He’s a big puncher. I have to talk to my team to decide if I go back to 135 or stay at 140,” Linares said.

Cano looked like a full fledged welterweight, and not a light welterweight tonight. The size difference between the two fighters was too much for Linares to have had a chance to win. Cano would have had problems had he been in with one of the good light welterweights like Regis Prograis, Jose Ramirez, Josh Taylor, Ivan Baranchyk or Kiryl Relikh, but those guys are natural 140 lb fighters.

“I was always looking for a big win,” Cano said. “Absolutely, we’re Mexicans, we’re warriors, and we’re here to fight whoever. These [past] fights were very close. They could have gone either way,” Cano said about some of his past losses. “It was an honor to fight a three division world champion Jorge Linares,” Cano said. 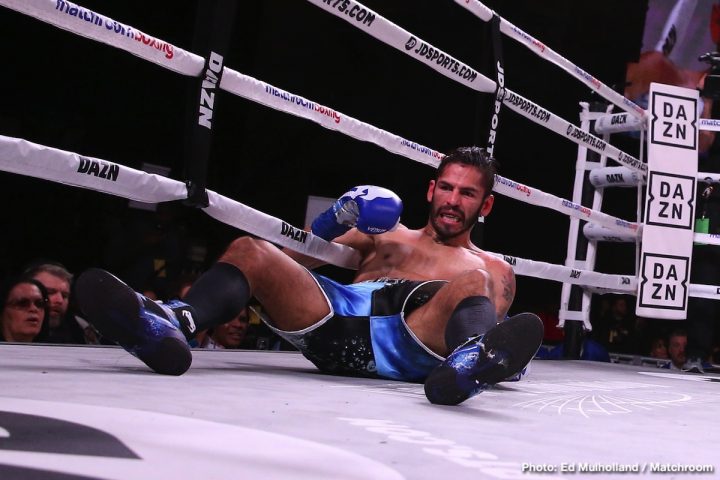 Cano came into the fight having lost five out of his last six fights. Three of Cano’s career seven losses were controversial ones that could have gone the other way. As powerful as Cano looked tonight, he looked like he would turn the tables on all seven of the guys that beat him in the past.

The victory for Cano could lead to him getting a title shot against WBO light welterweight champion Maurice Hooker. Cano currently isn’t ranked in the top 15 by the World Boxing Organization at 140. That could change after tonight.

Undefeated super flyweight champion TJ Doheny (21-0, 15 KOs) stayed unbeaten with an 11th round knockout win over Ryohei Takahashi (16-4-1, 6 KOs). The southpaw Doheny watching Takahashi with left hands all night long, and getting the better of him. In the 11th, Doheny landed a three-punch combination that snapped Takahashi’s head back repeatedly. Referee Michael Ortega then stepped in and stopped the fight. The time of the stoppage was 2:18. Takahashi didn’t look badly hurt, but the referee didn’t like the way that his head was snapped back repeatedly by Doheny’s heavy shots in the final sequence. Takahashi had been cut between the eyes, and his face was reddened from the many shots he’d been hit with.