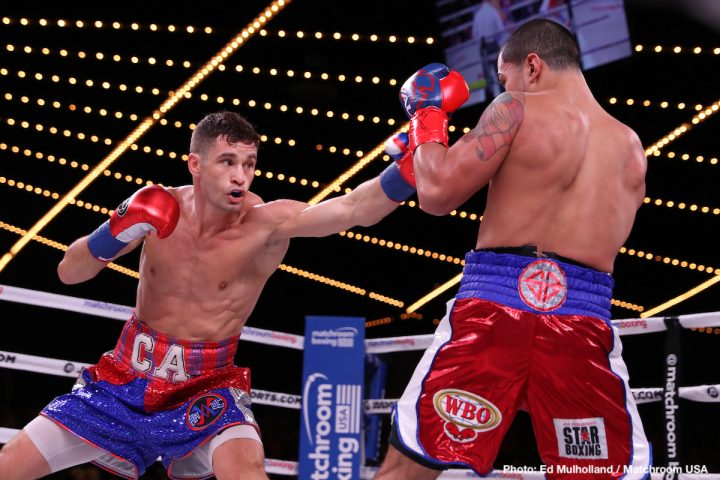 The results of the fight was not a popular one, as the crowd booed Algieri long and hard as he was being interviewed after the fight. Algieri, 34, was backing up the entire second half of the fight, and he didn’t look like the winner at the end. Algieri looked very upset at the end of the fight, knowing that he hadn’t performed the way he wanted to.

Algieri suffered a cut under his left eye from a clash of heads in round 5. Algieri looked to avoid exchanges after the cut opened, and this emboldened the younger 29-year-old Gonzalez, who pressured him nonstop and punished him with shots.

It looked like Algieri was exhausted by the fifth round. His legs looked rubbery, and the power that he had shown in the first three rounds was gone. Algieri started to fade by the third round. He was losing power on his shots, and getting hit more and more.

“My performance wasn’t my best,” Algieri said after the fight in admitting that he failed to perform well. “I felt a little off. I got to take care of my eye. It wasn’t so much that I was tired. My eye was getting worse and worse. I think I can come back in a short period of time. I need a longer camp. I want a full eight week camp. As long as I can have a proper camp, I can turn it up when I need it.”

With this victory, Algieri will need to be challenging WBO light welterweight champion Maurice Hooker. That’s going to be a very tough fight for Algieri if he doesn’t have more in the gas tank than what he showed tonight. Algieri isn’t going to be able to last long against Hooker if he gasses out after five rounds. It’s going to take some energy for Algieri to be able to wear Hooker down. Hooker is beatable, but requires a fighter with a good engine. Algieri looked like a six-round fighter tonight, not a 12 rounder. Algieri needs to improve his stamina for him to beat Hooker.

In other action on the card, Amanda Serrano (36-1-1, 27 KOs) destroyed Eva Voraberger (24-6, 11 KOs) by a 1st round knockout to win the vacant World Boxing Organization Female super flyweight title. The victory for the young Serrano was her seventh division world title. The fight was stopped after just 35 seconds. Serrano attacked Voraberger from the opening seconds of the fight, nailing her with shots, and backing her up. Serrano finally nailed Voraberger with a big shot to the body that dropped her for the count. Although the match was a mismatch, it was impressive to see how devastating of a puncher Serrano is. She’s a very good fighter.