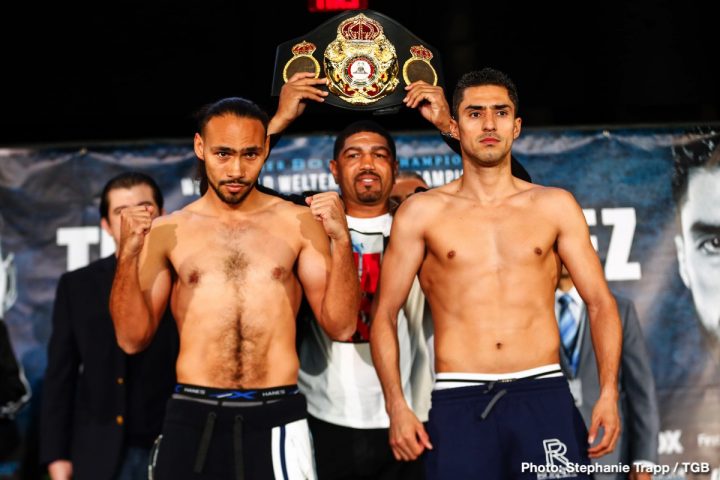 By Jeff Aranow: WBA welterweight champion Keith ‘One Time’Thurman (28-0, 22 KOs) will be tested tonight by the always tough Josesito Lopez (36-7, 19 KOs) in their 12 round fight on Premier Boxing Champions on FOX. The often injured Thurman, 30, returns from 2 years of inactivity to make a rare defense of his WBA Super World 147 lb title at the Barclays Center in Brooklyn, New York.

This is Thurman’s fight to win. He’s got a guy that was never among the best at 147 even when he briefly made waves in the division in 2012 after beating Victor Ortiz on an injury stoppage.

Thurman, now known as “Sometimes”, by many boxing fans, is going to need to be put in suspended animation after tonight to freeze him in a state where his body is injury free for him to get to the bigger money fights against Errol Spence Jr., Manny Pacquiao, Terence Crawford, Shawn Porter and Danny Garcia. Thurman has loads of talent, but his body won’t stay healthy long enough for him to take advantage of that talent. Thurman’s wins in the past over Porter and Danny Garcia weren’t significant enough victories to take him to next level in terms of popularity. If this was a climb of Mount Everest, Thurman has made it to Camp 4, which is the point before the toughest part of the climb to the summit. This is where it gets very tough to try and get to the top. Thurman was stopped from making the climb to the top of the summit due to injuries. ‘One Time’ just keeps breaking down because his fragile body. The other thing that could stop Thurman from getting to the top is his own fear. He doesn’t seem like he wants to face Spence and Crawford. If the injuries don’t stop Thurman, his own reluctance to want to fight the best will keep him from becoming the star that he longs to be. If Thurman could have a mind transplant from warriors like Manny Pacquiao, Floyd Mayweather Jr. and Spence, then maybe he could start the final ascent to the summit.

Lopez, 34, is in the position of the spoiler tonight. He can stop Thurman from moving on to the bigger fights that he craves if he can beat him somehow. Lopez has been a pro for 16 years, and he has past wins over Victor Ortiz, Aaron Martinez, Miguel Flores, and Mike Arnaoutis. Lopez has lost each time he’s stepped up against the top level fighters since his upset victory over Ortiz in 2012. Lopez has loses to Jessie Vargas, Andre Berto, Saul Canelo Alvarez and Marcos Maidana.

Lopez was giving Berto all he could handle before getting in March 2015. Things were looking bad for Berto before he suddenly dropped Lopez twice in the sixth round to get a stoppage victory. It’s interesting to note that Floyd Mayweather Jr. justified his choice of facing Berto in 2015 by pointing out that he’d beaten Josesito in his previous fight. While the boxing public wasn’t impressed with Mayweather’s choice of Berto as an opponent in 2015, Floyd thought enough of Lopez to see him as a good enough opponent for Berto to deserve a fight against him.

Thurman isn’t a big puncher, and that’s one of the reasons why he’s getting injured so much. He has to put himself in harm’s way for him to win his fights, and that means he gets hit more than the bigger punchers in the division like Spence do. Early on in Thurman’s career, being called ‘One Time’ fit him, seeing as he was knocking guys out with one shot. Those were poor opponents that didn’t belong in the ring with him. Thurman hasn’t been able to knockout the better fighters, which makes his nickname kind of silly. Thurman needs to change his nickname to something more fitting to what he’s become.

The injuries, and the long period of inactivity and criticism that Thurman has had to deal with in the last two years has made him touchy when it comes to the opinions of the boxing public. Thurman has gotten to the point where he seems angry at his many critics, saying that he doesn’t owe the fans anything. It’s an odd stance for Thurman to take, because he doesn’t quite understand that he needs to be inside the ring to entertain the fans. Thurman wants to be popular, but he doesn’t fight often enough due to his health problems.

What Thurman fails to understand is that the fans are lettig him know that he’s not the #1 guy at welterweight anymore. Thurman isn’t even the #3 guy. He’s been replaced by #1 Errol Spence Jr., #2 Terence Crawford, #3 Manny Pacquiao and #4 Shawn Porter in the list of the top welterweights in the division. Thurman is #5 at welterweight, and if he doesn’t be careful, he could slide to #6 behind Egidijus Kavaliauskas or Alexander Besputin. Boxing is a young man’s sport, and fighters age at different rates. 30 can be 40 to some fighters. Thurman just might be one of those guys whose chronological number doesn’t match what his body is at the moment.

“He chose the wrong opponent to come back to. And I’m going to prove that,” Lopez said about Thurman. “I don’t know if Keith is overlooking me, but whatever the situation is, it will show in the ring. I’ve prepared for the best Keith Thurman and I’m prepared for Saturday night.”

Thurman is definitely looking past Lopez towards a fight that he badly wants against WBA World welterweight champion Manny Pacquiao, but that doesn’t mean that he’s not going to to beat his best, such as it is for him coming off of a two-year layoff from the ring. Thurman and his management picked out Lopez for a reason. He needs a win in a bad way, and he has to look impressive. Thurman has studied Lopez enough to feel confident that he can beat him without too many problems. If Thurman wanted a guy that that would give him problems and would excite the boxing public, he would have selected Danny Garcia, Shawn Porter or Kell Brook.

Heavyweight contender Adam Kownacki (18-0, 14 KOs) vs. Gerald Washington (19-2-1, 12 KOs) will be the chief support tonight on the Thurman-Lopez card. Kownacki, 29, is working his way to a title shot against WBC heavyweight champion Deontay Wilder.


« Jaime Munguia vs. Takeshi Inoue – preview, prediction & how to watch