Jaime Munguia vs. Takeshi Inoue – preview, prediction & how to watch 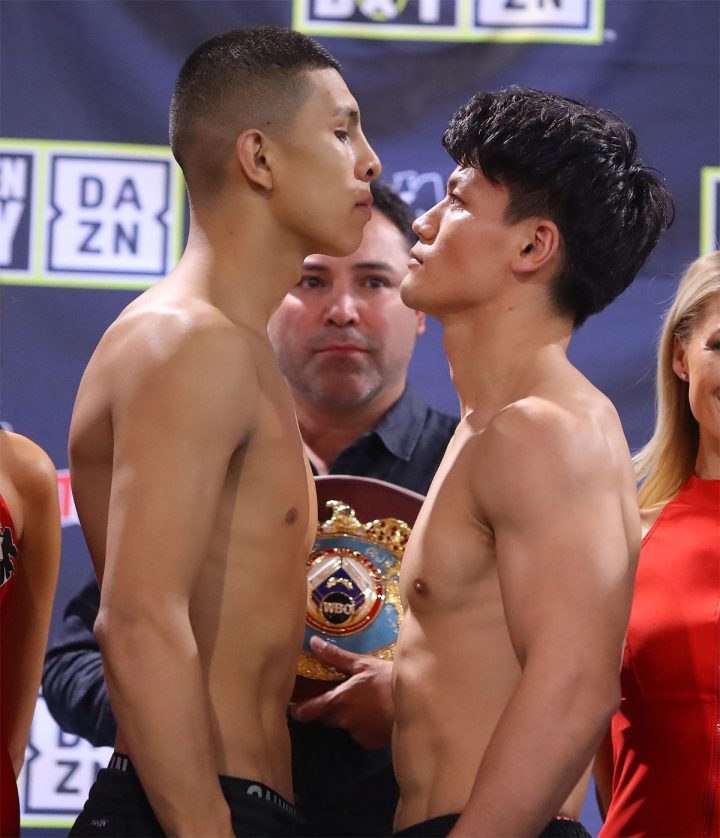 By Chris Williams – WBO junior middleweight champion Jaime Munguia (31-0, 26 KOs) will be defending his title tonight against unheralded, little known #3 WBO contender Takeshi Inoue (13-0-1, 7 KOs) on DAZN at the Toyota Center in Houston, Texas. This is another learning fight for the 22-year-old Munguia to gain experience before he’s eventually put in with the talented fighters at 154 and/or 160.

Munguia vs. Inoue is such a mismatch that you have to be more than a little concerned. Inoue doesn’t look like he belongs inside the ring with a fighter like Munguia. On paper, this is a bad match-up. Inoue has been facing lower level opposition his entire career, and he’s very short for the division. Unlike 5’8″ Saul Canelo Alvarez, Inoue isn’t hard to hit. He’s there to be hit, and that’s bad news given that he’s facing a guy with huge power in both hands in Munguia.

For all intents and purposes, this is a middleweight vs. a welterweight match-up tonight between champion Munguia and the smaller Inoue. Munguia rehydrates to the mid-170s for his fights, which puts him right up there with former middleweight champion Gennady Golovkin in terms of weight. Inoue is stocky, but his lack of height and reach is going to put him at the mercy of Munguia’s shots tonight. If this fight goes three rounds, it’ll be a miracle. It’s surprising that Golden Boy Promotions selected such a weak opponent for Munguia to fight. These are supposed to be learning fights for Munguia, but he’s not going to learn anything fighting a short fighter with limited talent like Inoue. Most of the junior middleweight contenders and champions are in the 5’10” to 6’1″ range, and possess power and talent. Inoue, 5’8″, doesn’t have talent, power or the reach to help Munguia get ready to face the lions at 154 like Jarrett Hurd, Jermell Charlo, Erislandy Lara and Tony Harrison.

Golden Boy Promotions CEO Oscar De La Hoya says his young Mexican talent Munguia will be ready to take on the best at 154 and 160 by 2020, but that will depend on how he performs against the 29-year-old Inoue and in his next fight against WBO mandatory Dennis Hogan. Neither of those fighters have much in the way of talent, so Munguia is going to need to beat them in an impressive fashion for him to get to be put in with the better fighters. De La Hoya likely won’t let Munguia anywhere near the likes of IBF/WBA junior middleweight champion Jarrett Hurd or the Charlo brothers, Jermall and Jermell, if he struggles against Inoue and Hogan the way he did in beating former WBO 154 lb champion Liam Smith last July.

“He’s definitely top five,” Golden Boy Promotions CEO Oscar De La Hoya said about his fighter Jaime Munguia to Thaboxingvoice in talking about where he rates him among the other elite at junior middleweight. “He’s an exciting fighter. He’s undefeated, a world champion, but he’s only 21-years-old [Munguia is actually 22]. He has a long ways to go. There’s a lot of room for improvement. Mentally and physically, I think he’s right there. By the end of the year, he’ll be ready for anybody, whether its 154 or 160,” De La Hoya said.

Munguia won’t get too much resistance on Saturday night against the 5’8″ Inoue, who comes from Japan, and has fought no name opposition his entire five year pro career. Inoue has a six round draw on his otherwise perfect record against a fighter named Daishi Nagata (11-2-1, 5 KOs) in 2014. Inoue hasn’t shown much talent in his fights since then. He’s short, not powerful, and he gets hit a lot in his fights. In other words, Inoue is perfect for Munguia to chop to pieces tonight. Inoue looks likes a less refined version of Sadam Ali. He doesn’t posses the boxing skills that Inoue has going for him, and he’s more of a slugger despite not having much punching power going for him. Inoue will need to be more defensive tonight against the 6’0″ Munguia if he doesn’t want to get bludgeoned to pieces right away.

Inoue’s last 10 fights have come against these unknown fighters:

That’s embarrassing opposition for a challenge to have fought to get a world title shot. It’s unknown why the World Boxing Organization decided to give Inoue a #3 ranking based off the poor level of opposition he’s faced. Sanctioning bodies need to rank fighters based on the level of opposition that they’ve beaten. In the case of Inoue, he’s been given a high ranking by the WBO based on wins over fluff. When one looks at Inoue’s weak resume, it’s hard to believe the WBO has him ranked above #4 Kell Brook, #5 Erislandy Lara, #7 Bakhram Murtazaliev, #10 Carlos Adam and #14 Liam Smith. Those fighters would all likely beat Inoue quite easily.

Munguia is going move in quickly and batter the smaller Inoue to pieces within three rounds tonight. If Munguia pushes hard, he’ll get Inoue out of there in two rounds at the most. If Munguia purposefully takes his time at the request of his trainer, he’ll stop Inoue in three rounds. This is that kind of a mismatch. You’ve got a guy that arguably shouldn’t be ranked all in the top 15 facing a very good fighter in Munguia. To be sure, Munguia probably shouldn’t be a world champion this early on in his career, considering that he still needs to refine his boxing skills before he holds a title. Munguia has a target on his chest in holding down the World Boxing Organization 154 lb belt. The WBO has made it easy for Munguia by ranking beatable fighters like Denis Hogan and Inoue in the top three, but that’s not going to stay like that forever. Munguia is going to need to improve if he wants to be able to beat the talented contenders like Erislandy Lara and Julian ‘J-Rock’ Williams. Right now, those would be very tough fights for Munguia, and he could lose to both of those guys.

“He wants to unify the titles, and he wants to fight the very best,” De La Hoya said about Munguia. “He’s on the fast track to becoming one of the best in the sport. If you were to leave it up to Jaime Munguia, he would fight anybody right now, including the Charlo brothers, [Jarrett] Hurd, and any of the 154 lb champions out there. I think he’s almost ready. He’s almost there, and we strongly feel Jaime Munguia is a fighter who is coming on fast. He has good trainer in Roberto Alcazar, who is teaching him the fundamentals. Jaime Munguia is very relentless, and in your face. He doesn’t know how to take a step going backwards. He hits like a mule [kicks]. He wants to knock you out. He has to calm down just a bit, and that’s going to come with experience,” De La Hoya said.

Munguia looks like he’s further away from being able to compete against the likes of Jarrett Hurd, Erislandy Lara and Jermell Charlo than just one year. Munguia would likely get knocked out by all three of those fighters if he were to face them in 2019. Tony Harrison is probably a winnable fight for Munguia, but even that would be a tough one for him. Harrison has a lot of boxing skills, and he’s a lot more polished from his years of training at the Kronk Gym.

“In the near future, we’re going to see Jaime Munguia, who is going to go in against anybody, and who is going to refine his style, and his punching, and his power in a way where it’s going to help him to continue to grow as champion,” De La Hoya said.

Putting Munguia in with WBA/WBC middleweight champion Saul Canelo Alvarez in 2020 isn’t a bad idea by Golden Boy. Munguia has the size to give Canelo problems, and even if he loses, it’s not a big deal for him. Canelo might veto the idea of fighting Munguia if it happens when he’s not ready for the fight. Canelo decides when and where he wants to fight certain guys. Although it would be in Canelo’s best interest to fight Munguia as soon as possible before he develops into an unstoppable force of nature, he might not want to make that fight for whatever reason. Canelo has the pick of the litter right now of who he wants to fight, and Munguia might not be someone he wants to fight in the next year. That could be a mistake on Canelo’s part if he waits too long before fighting Munguia. A 25-year-old Munguia is a much different story than the current inexperienced 22-year-old fighter he is today. Munguia is going to get better with each year, and it could be bad news for Canelo is he’s older and shop worn from his wars with Gennady Golovkin. Golden Boy Promotions is clearly polishing Munguia to have him as the replacement or Canelo when his game falls off sharply or when he retires, which he’s expected to do by the time he hits his mid-30s. If Munguia can take Canelo’s scalp while he’s still in his prime, it would catapult him to the next level overnight, and make him a huge star. DAZN would likely need to come up with a big contract to have Munguia fighting on their platform, as he can make a lot of money fighting on ESPN PPV or SHOWTIME PPV if his popularity soars with a victory or two over Canelo or Golovkin. The skies the limit with Munguia, but he needs to keep improving for him to beat those type of fighters.

Join DAZN and watch more than 100 fight nights a year