Keith Thurman vs. Josesito Lopez this Sat. on FOX 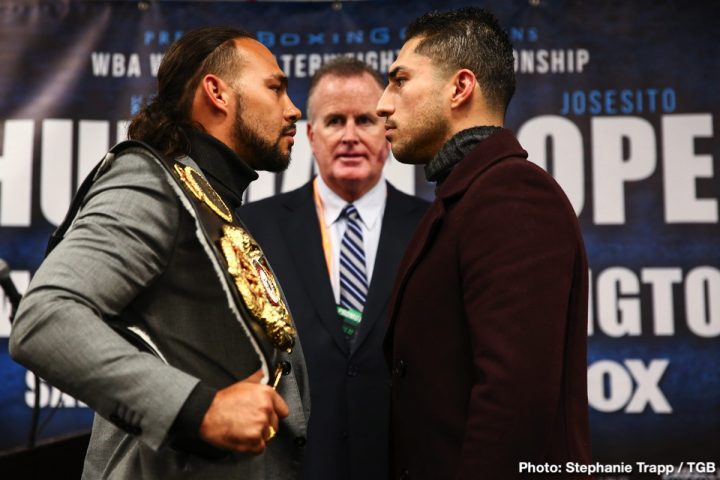 By Jeff Aranow: Keith ‘One Time’ Thurman (28-0, 22 KOs) will be making his long awaited return to the ring this Saturday night against #7 WBA Josesito Lopez (36-7, 19 KOs) on Premier Boxing Champions on FOX and FOX Deportes at the Barclays Center in Brooklyn, New York. The televised fight card starts at 8:00 p.m. ET.

This appearance by the now 30-year-old Thurman marks his first fight in just shy of two years.

Thurman last fought in March of 2017 in beating Danny Garcia. Thurman vacated his WBC welterweight title last year when he was about to have it stripped from him by the sanctioning body. The WBA stuck with Thurman, letting him sit on their title without defending it year after year. It must have been tough on the contenders in the WBA’s top 15 to have sit by for two years while Thurman was out with injuries.

Despite being out of the ring for close to two years, Thurman doesn’t expect to be rusty from the inactivity. He thinks he’s going to be at his best. With rate that Thurman has been suffering injuries in the last six years of his career, it’s something you have to be concerned about in the last four days before the fight. Thurman seems to be brittle, and not made for the rigors of boxing. At some point, if Thurman’s injuries continue at the alarming rate that they’ve been, he could wind up without any titles. IBF welterweight champion Errol Spence has wanted to fight Thurman for the last two years, but he couldn’t because of his injuries.

“I don’t think ring rust will be an issue,” Thurman said. “The only thing that even if this may not be the best Keith Thurman that people have ever seen, we’re focused on getting better and much stronger with each fight…I’m going to show my versatility in the ring. I’m going to show Josesito what it’s like to be in the ring with me.”

More important than Thurman winning in an impressive fashion is him getting through the fight with Lopez in one piece without suffering an injury. Thurman doesn’t need another injury that keeps him out of action for another two years.

Thurman is fighting a guy where it won’t matter if he’s got some ring rust. This is a mismatch. Lopez, 34, isn’t the same fighter that upset former WBC welterweight champion Victor Ortiz by a ninth round knockout seven years ago in June 2012. That was easily the biggest win over Lopez’s 16 year pro career, but it came against a fighter with a broken jaw. Lopez hasn’t done a whole lot since then in losing to Saul Canelo Alvarez in a world title shot in 2012, Marcos Maidana and Andre Berto. Lopez has fought some well known guys, but he’s lost to them. Lopez is coming into Saturday’s fight with Thurman on a roll in having won his last three fights against Miguel Cruz, Saul Corral and Todd Manuel.

Heavyweight contender Adam Kownacki (18-0, 14 KOs) will be fighting an important match against former world title challenger Gerald Washington (19-2-1, 12 KOs) in a 10 round fight. #8 WBC Kownacki, 29, needs to keep winning for him to stay in line for a world title shot against WBC champion Deontay Wilder. Kownacki will need to keep winning for him to earn a mandatory title shot against the 6’7″ Wilder. Kownacki is too dangerous for Wilder to face him in a voluntary defense.

Kownacki is on a roll right now with his career. He defeated former IBF champion Charles Martin by a 10 round decision in his last fight in September. Before, Kownacki defeated Iago Kiladze and former world title challenger Artur Szpilka.

Washington, 36, has lost two out of his last three fights in stoppage losses to Jarrell ‘Big Baby’ Miller and Deontay Wilder. There’s nothing wrong with losing to fighters of that caliber. Washington gave it his best shot in both of those fights. He almost knocked out Miller in the fifth round after flurrying on him. If Washington didn’t gas out suddenly, he probably would have stopped him. Against Wilder, Washington was getting the better of him in the first four rounds before he was hurt and stopped in the fifth.