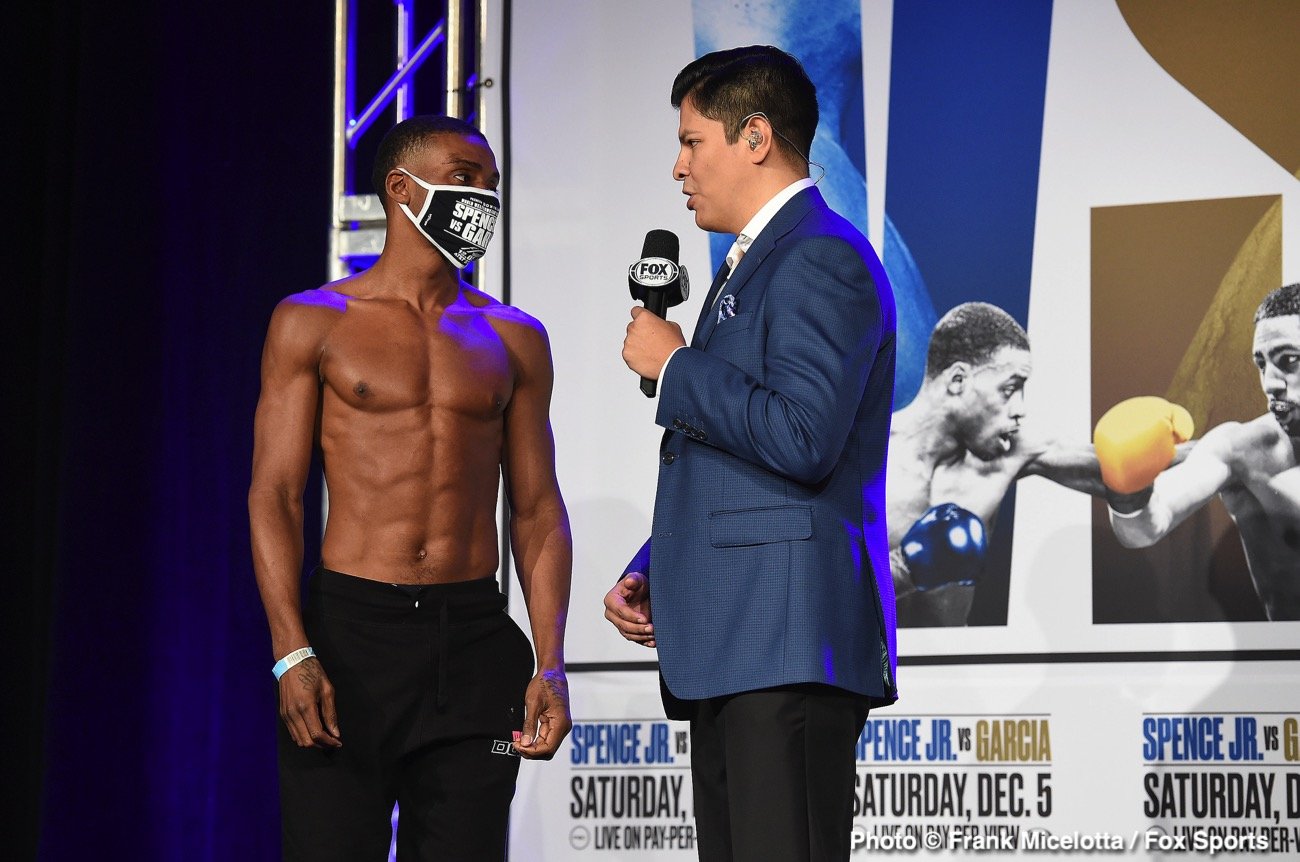 By Matt Lieberman: Welterweight world champion Errol Spence Jr. returns to the ring tonight for his first fight since his car accident last year in facing Danny Garcia on Fox Sports PPV and FITE TV at the AT&T Stadium in Arlington, Texas.

This is the fight that the boxing world has been eagerly waiting on for the last 12 months, and it’s finally here. IBF/WBC 147-lb champion Spence (26-0, 21 KOs) has fully recovered from his injuries in his car crash in Dallas, Texas in 2019, and he’s been given a medical clearance to return to action.

Tonight, we’re going to see if Spence ‘The Truth’ made the correct decision to hurry back into the ring against the former two-division world champion Danny ‘Swift’ or if he should have taken an easier fight.

Garcia’s dad, Angel Garcia, says he doesn’t think Spence is 100% there mentally from his car crash, and he doesn’t care that the doctors have deemed that he’s healthy and ready to resume his career. 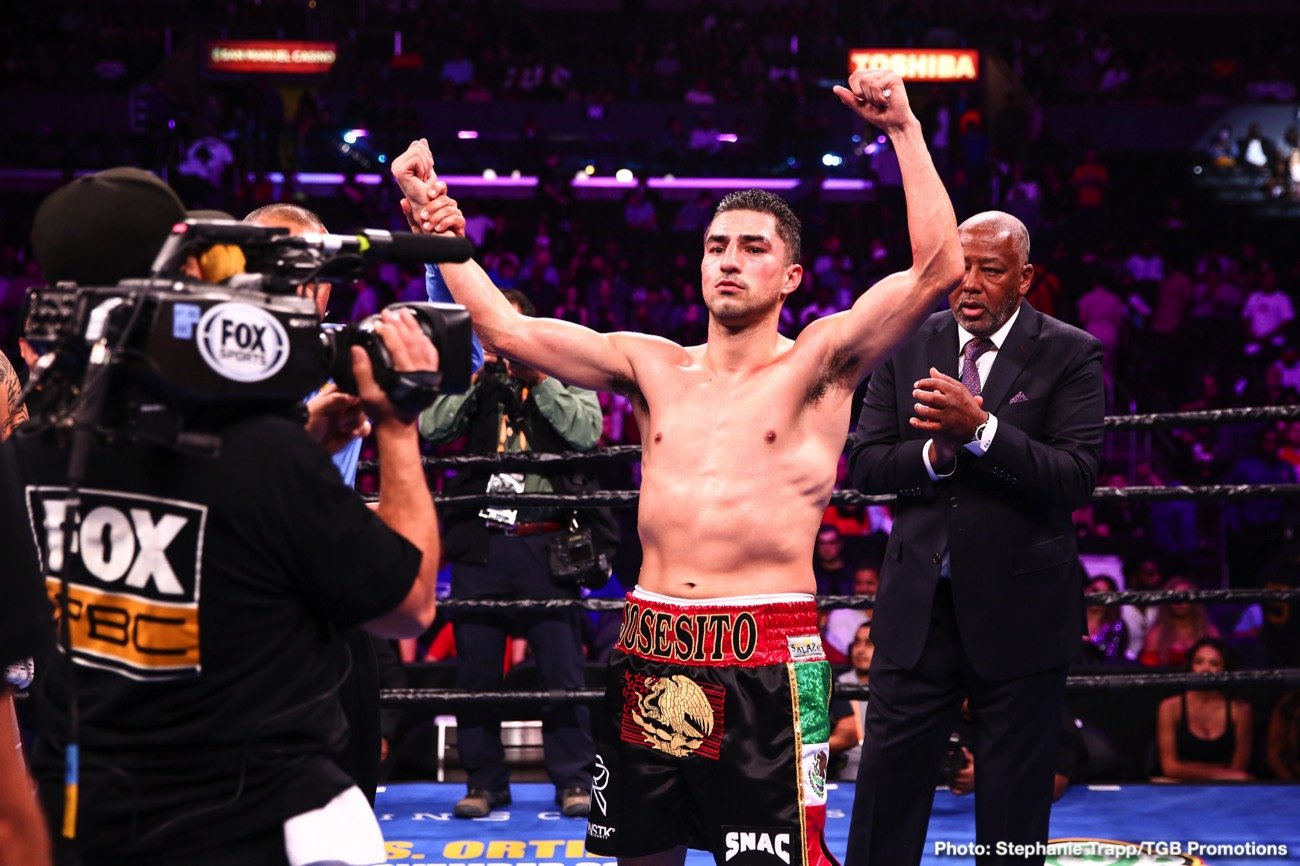 Fundora was originally scheduled to face Jorge Cota, but he dropped out from the card after testing positive for the dreaded coronavirus.

Luckily for Fundora, Ahmed was available to come in and replace Cota on short notice. Fundora vs. Coto is a WBA 154-lb title eliminator.

The hard-hitting welterweight contender Josesito Lopez will be taking on the always tough Francisco Santa in a 10-round bout.

Lopez (37-8, 20 KOs), a former two-time world title challenger, is looking to pick up his second consecutive victory. Josesito, 36, last fought in September 2019, defeating John Molina Jr by an eighth-round knockout in a war.

“The Riverside Rocky” Lopez needs to keep winning to put himself in position for a world title shot, which is possible if he can get one or two solid wins. Lopez is currently ranked #9 by the World Boxing Council at 147.

Plus, featherweight contender Eduardo Ramirez faces Texas contender Miguel Flores in a Featherweight Title Eliminator to kick off the pay-per-view.

“It’s a great fight, and I think Danny Garcia has all the tools to win, but I still pick Errol Spence to win by decision, but I wouldn’t be surprised if Danny lands and hurts him,” said trainer Robert Garcia to Fighthype. 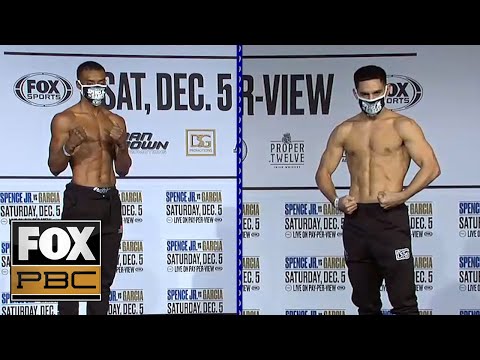 “We got to see how he’s reacting after that accident. That’s a big question in this, and that could be a big difference. I wouldn’t be surprised if Danny lands and hurts him,” said Robert.

Trainer Robert Garcia isn’t the only one giving Danny Garcia an excellent shot at defeating the 30-year-old Spence. A whole legion of fans, fighters, and former fighters believe Danny will win tonight.

It’s not just the car accident that Spence is coming off of that makes people doubt his chances; it’s the fact that he looked so poor against Shawn Porter a year ago.

The Spence that boxing fans saw eke out a narrow 12 round split decision against Porter will be vulnerable against Danny.

Garcia’s left hook, his bread and butter punch, is a weapon that he’ll likely use tonight with great effectiveness against Errol.

With the type of power that Danny has on his left hook, he only needs to land it once on Spence’s button for him to knock him out.

Assuming Spence’s punch resistance has been impaired from his car crash, Garcia could end this fight early tonight.

Mancini: We don’t know how Spence’s brain will react

“Danny is a live dog in this fight,” said Ray Mancini to Fighthub. “He’s slick and draws you into his traps and counters you. That left hook that he has is the punch to use against a southpaw. 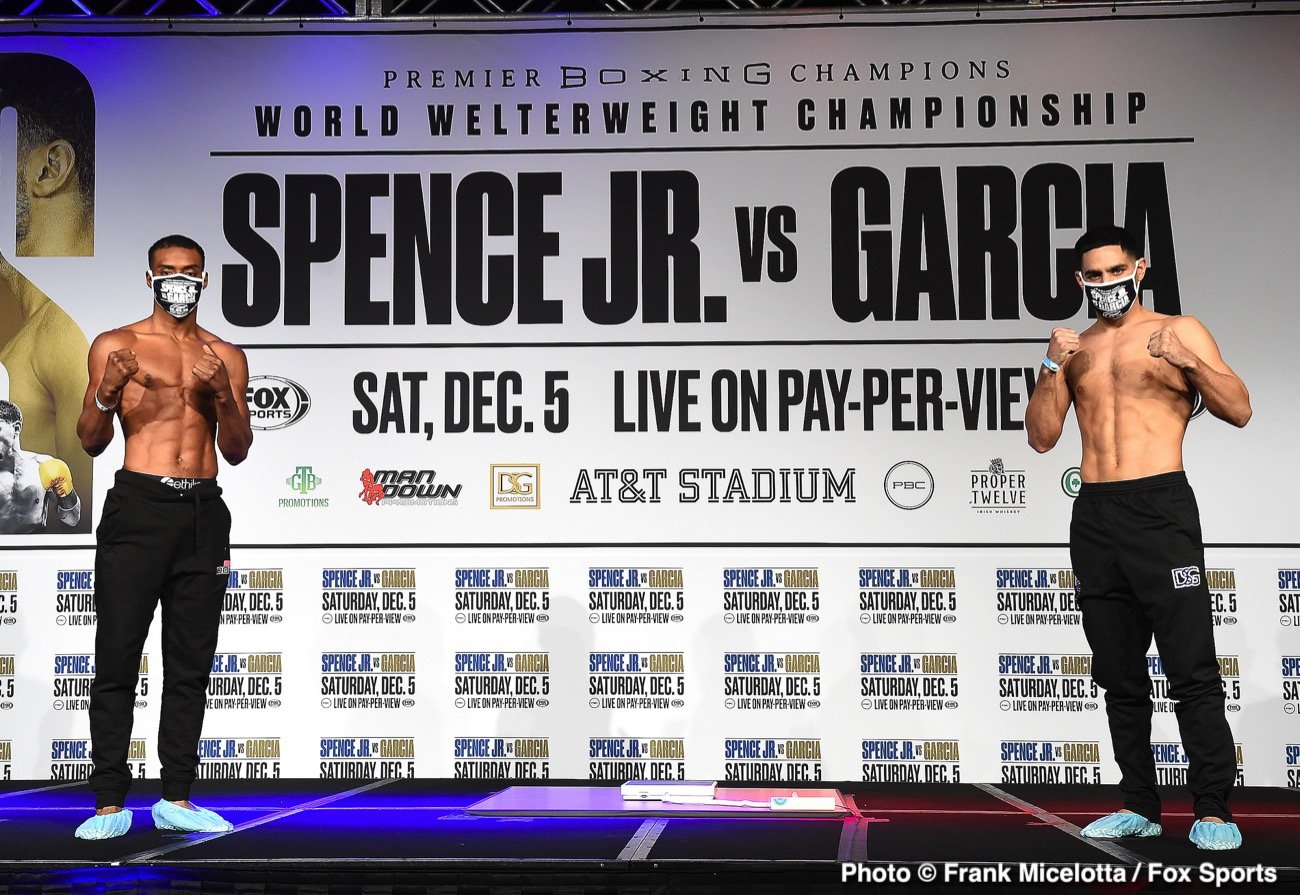 “Not the right hand, it’s the left hook. It comes from the blindside. Danny has a sneaky left hook. If Errol gets careless and tries to over-rush, he’s going to walk into something.

“I admire Errol for not having an easy fight after such a bad accident. He’s taking one of the toughest guys in the division without a tuneup fight. You got to admire that. We don’t know what will happen if he gets hit with a left hook on the chin.

“We don’t know. How is his brain going to react? If Danny somehow beats Errol, I wouldn’t be surprised. Errol would have to walk into something that Danny sets up for him,” Mancini said.

In some ways, it’s good that Errol is taking on the huge-punching Danny Garcia tonight, as it will answer the questions about his mental fitness to resume fighting.

If Spence gets through the Garcia fight without getting knocked out or hurt, he’ll show his doubters that he’s the same guy he was before the accident. As long as Spence wins, he’ll be viewed in the same light as he previously was by fans.

“If it goes to a decision, Errol just throws too many punches, and he’s too much of a high-volume puncher for Danny,” said Mancini. “I think he’s too strong for Danny.

“Errol is basically a 154-160-pounder, we know that. He’s fighting at 147, but he’s bigger and stronger than that. I think he’ll push Danny around. Danny will try and hold his ground, but Errol is too strong.

“I thought before that Errol would be a big favorite because I thought he was the best pound-for-pounder in the game before his accident. I still think that he didn’t pick Danny by chance.

“He picked him because he’s really confident, and he picked a real guy. I’m picking Errol to win. I don’t see it by stoppage. It’ll be by a decision, a close unanimous decision.

“It may be the one that sets up the big fight between him and Crawford, who knows? Danny goes out and holds the center ring pretty good, and he does a good job at that. I say go out and do the same thing, establish the center ring. 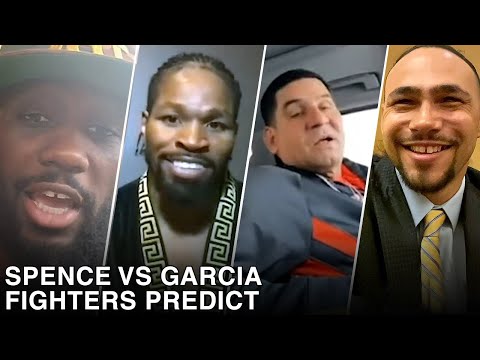 Shawn Porter almost beat Errol in losing a 12 round split decision. If not for Spence dropping Porter in the 11th, Shawn would have won the fight. Porter’s high work-rate was key in that fight, and he gave Spence all he could handle.

Danny Garcia has got to stay in close

“You try and jab him in the shoulder and knock him off,” Mancini continued. “A southpaw will faint, and most guys throw a long right hand. But when you throw a right hand, you expose yourself.

“It travels twice as far. A southpaw leans back and follows your right with a counter. That’s why the guys are so effective. Pacquiao gets guys by feints and feints and then counters them, and he’s so quick. 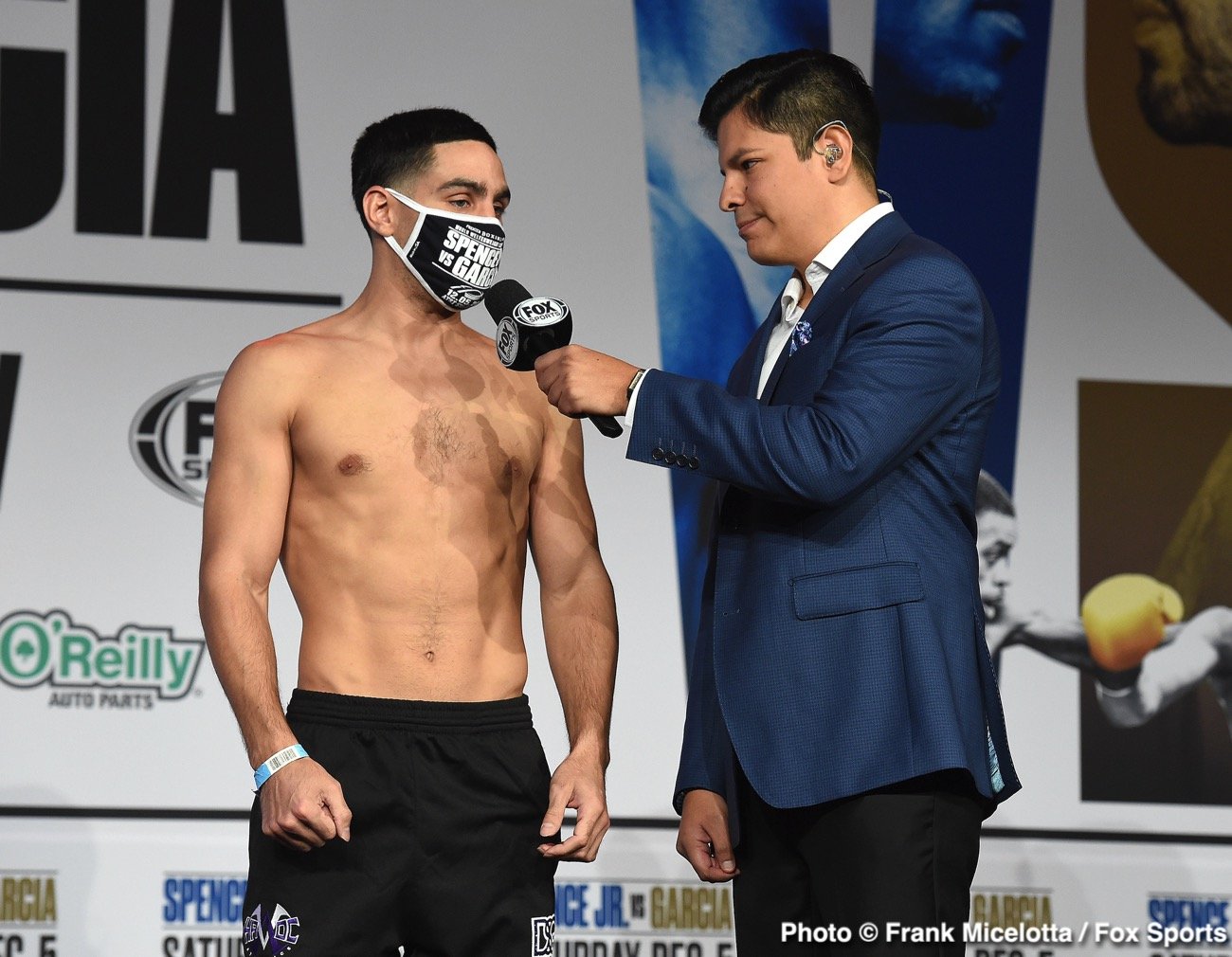 “Danny has got to get close and bang that left hook to the ribs and a right hand over the top. A left hook is the most effective punch against a southpaw. It comes from the blindside.

“I think Danny takes a good punch. Mikey Garcia, even though he got beat, he created the blueprint because when he got close, he was catching Errol.

“He just wasn’t doing enough or as often as he should because Errol negated all that after a while. With Errol, if you’re at the end of his punches, you have no shot.

“You have to stay inside, keep the hands uptight, and keep punching that body. Shawn [Porter] showed good effective bodywork against Errol, so it can be done if you get close enough.

“I think Danny is a little slicker than Shawn, so we’ll see. He’s not as strong as Shawn, but he’s slick,” said Mancini about Danny Garcia.

It makes a lot of sense what former lightweight world champion ‘Boom Boom’ Mancini says about Danny needing to stay in close against Spence tonight.

If the shorter-armed Garcia stays on the outside, he’s going to get rattled to pieces with jabs and straight lefts from Errol. 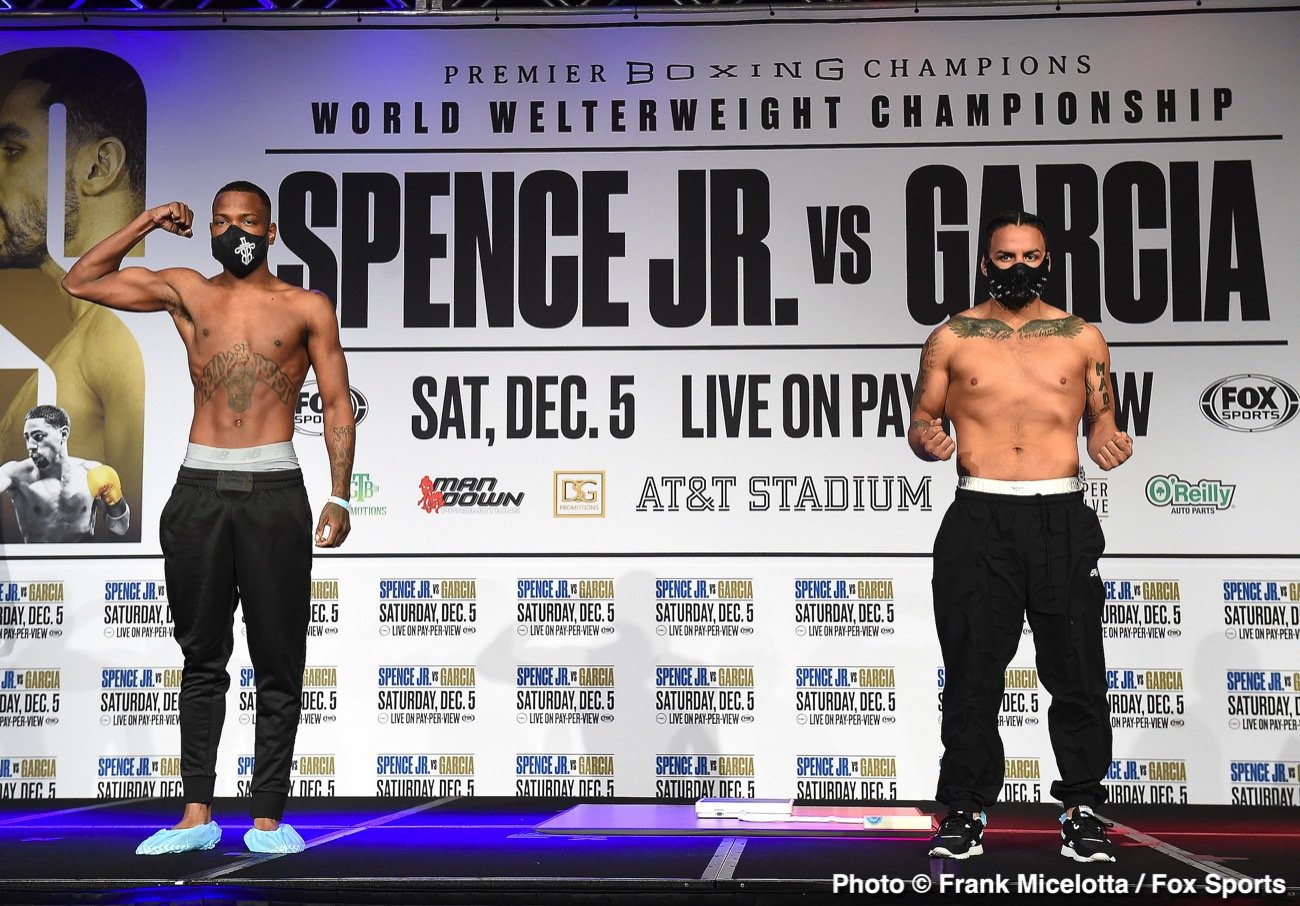 As Mancini points out, Mikey Garcia created the blueprint to defeat Spence by getting in close.