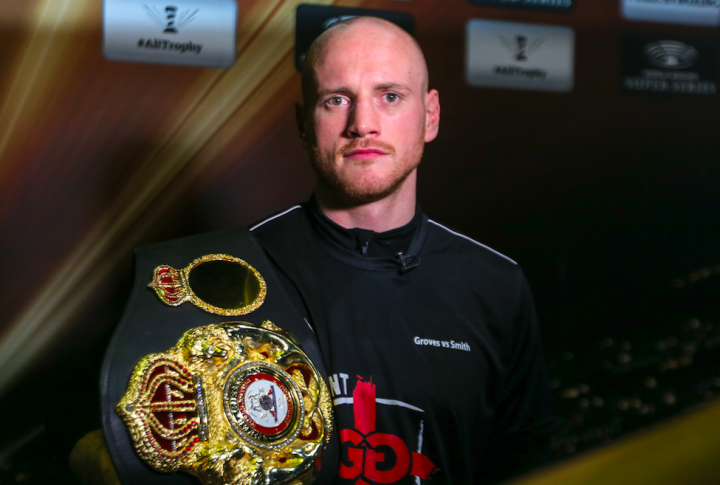 By Trevor McIntyre: Former WBA 168 pound world champion George Groves officially announced his retirement from boxing after 11 years as a pro. Still young at 30-years-old, Groves (28-4, 20 KOs) says he wants to retire while he’s still on top so that he can spend time with his family. Groves says he didn’t want to retire because of an injury.

It’s a surprise to some fans, considering how tough Groves fought unbeaten Callum Smith recently in the final of the World Boxing Super Series tournament last September. Although Groves was ultimately knocked out in the seventh round by the 6’3″ Smith (25-0, 18 KOs), he gave him all he could handle in the fight before losing.

Groves has earned his way to the WBSS final by beating Chris Eubank Jr. and Jamie Cox in one-sided fights. Groves’s victory over Eubank Jr. proved costly, as he suffered a dislocated left shoulder in round twelve. Coming back from that injury took a while for Groves, and it’s unknown if his shoulder was back to full power or not when he fought Callum in the final of the WBSS on September 28 in Jeddah, Saudi Arabia.

Former super middleweight champion Carl Froch didn’t have much to say about Groves’ retirement other than he won’t miss him, and that picked a good time to walk away from the sport following his loss to Callum Smith.

Here’s what Froch said about Groves at skysports.com:

“I won’t miss him and I am not sure that British boxing will miss him, these days at least…He will be remembered for all those mind games and smart words he came out with, but I have to be honest, I never found him funny or clever.”

Possessed with a quick wit, Groves gave Froch the business verbally in the built up to their two fights together. Froch chose to banter with Groves instead of playing it low key, which would have made his life much easier going into their two fights. After five years, Froch still sounds like he’s harboring hurt feelings.

Groves has a lot to feel proud of, having beaten the likes of Fedor Chudinov, Eduard Gutknecht, Martin Murray, James DeGale, Christopher Rebrasse, Denis Douglin, Glen Johnson, Eubank Jr., Jamie Cox and Paul Smith. Groves made good money in his 2 fights against Carl Froch, both of which he lost in 2013 and 2014. Besides those defeats, Groves was beaten by Badou Jack and Callum Smith. He only lost to the best. The money that Grove made during his boxing career might be good enough for him to retire without the need to go into another profession. It’s hard to imagine Groves not being hired by one of the television networks as a commentator. He has the name, knowledge and the ability to dissect fights.

My retirement statement. Thank you. #TeamSaintGG “It’s something unpredictable, but in the end is right. I hope you had the time of your life.”

Groves’ trainer Shane McGuigan recently speculated this past week that he believed that there was a chance that he might continue his boxing career in order to face the winner of the the James DeGale vs. Chris Eubank Jr. or Callum Smith in a rematch. Mcguigan also thought retirement could be an option as well. As it turns out, Groves chose not to continue his career. However, with any boxer, you have to take a wait and see approach when it comes to them staying retired. A lot of the fighters retire for a spell, and then come back for different reasons. With Groves’ popularity, it could prove difficult for him to stay retired if he’s offered a load of money to fight the DeGale-Eubank Jr. winner. Groves has beaten both fighters. It’s doubtful that Groves vs. DeGale or Eubank Jr. would fill Wembley Stadium like his second fight with Carl Froch did in 2014, but it would still be a big enough fight to fill the O2 or Manchester Arena.