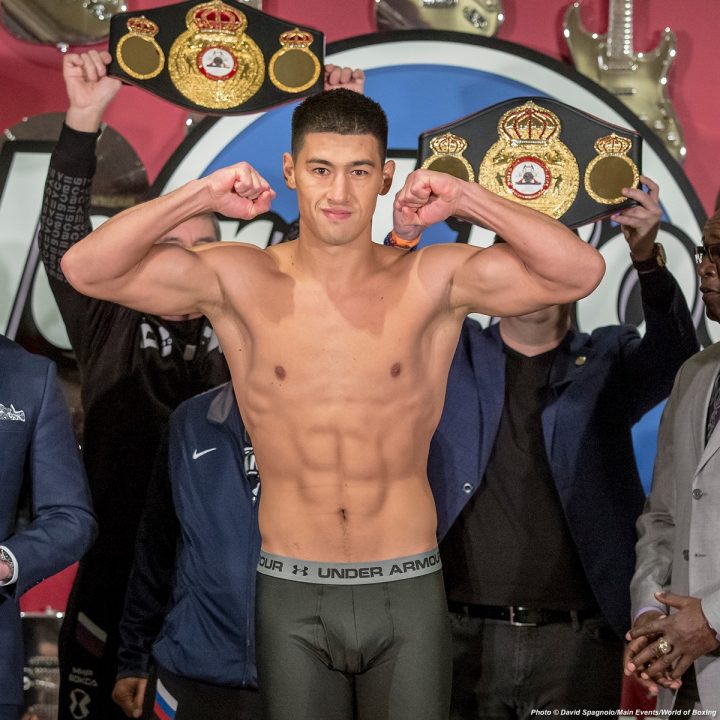 Tickets for the World title double-header starring Dmitry Bivol and Maurice Hooker defending their belts at Turning Stone Resort Casino on Saturday March 9 live on DAZN in the US and Sky Sports in the UK are on sale NOW!

Bivol puts his WBA Light-Heavyweight title on the line against Joe Smith Jr, the fifth defense of his belt after moving to 15-0 (11KOs) in November, with a comprehensive to a points win over former unified champion Jean Pascal in New Jersey. Bivol’s win over the Canadian was the latest impressive name on his growing CV, following a points triumph over Isaac Chilemba, a final round stoppage of Sullivan Barrera and a highlight real first round KO of Trent Broadhurst.

The Russian star will meet a stern test of his ambitions to unify the division in the shape of Smith Jnr (24-2 20KOs) the Long Islander who famously stopped Bernard Hopkins in the Philadelphia legend’s last pro fight in December 2016 and destroyed Andrzej Fonfara inside the opening round of their clash in Chicago six months earlier.

Hooker defends his WBO Junior-Welterweight title against unbeaten challenger Mikkel LesPierre, with Hooker making the second defense of his title following his stunning victory in November, climbing off the canvas in the second round against Alex Saucedo in the challengers Oklahoma City backyard to hand a first career loss to the 24 year old in the seventh round.

Hooker (25-0-3 17KOs), who won the title on the road earlier in the year in Manchester to take Terry Flanagan’s ‘0’ in June, will add upstate New York to his travels as he targets a major hometown defense in the summer. Trinidad and Tobago born Brooklynite LesPierre (20-0-1 9KOs) fights for his first World title against Hooker.

“I want to thank Joe and his team for taking the fight as I think that our styles will make for a great fight – but I will keep my title,” said Bivol. “I’m so happy that my team have come up with a great plan for my future on DAZN, it’s an exciting new chapter in my career and I cannot wait for March 9.

“This is a huge opportunity for me and one I’ll take full advantage of,” said Smith Jr. “This is everything that I’ve worked for, really hard, for my whole life, so I’m going to give it everything I’ve got, and come March 9, I will be 100 per cent ready to take that title home.”

“I can guarantee you that I’m leaving New York City with another ‘W’ in the win column,” Hooker said. “I’m hungry to get back to competing and I’m going to put on a great show so that I can bring my belt back to Dallas for my next bout.”

“We’re very excited that Mo will be fighting in New York, giving him the opportunity to shine in the biggest city in the world,” Roc Nation Sports boxing promoter Dino Duva said. “He had an unforgettable 2018 and we’re confident that he’ll sustain that momentum in 2019.”

“It’s been a long time coming, I’ve been grinding underground out of the public eye – so when I come to fight, I go to work and get the job done,” said LesPierre.

“I took this fight in a heartbeat. I don’t listen to what people say, some might not think I deserve this shot but come March 9, I will show people that I belong at this level. I’ve moved up the rankings and put the work in – there’s no-one out there that works harder than me or wants this more than me. I’ve put myself in position to get to this point and now it’s time to shine.”

Otha Jones III will make his professional debut on Saturday March 9 at Turning Stone Resort Casino in Verona, New York, live on DAZN in the US and Sky Sports in the UK.

Jones III announced his decision to join the paid ranks last week and the Ohio talent will begin converting his amateur prowess into professional success on a huge World title double-header bill as Dmitry Bivol defends his WBA World Light-Heavyweight title against Joe Smith Jr and Maurice Hooker is on the road again as he puts his WBO Junior Welterweight strap on the line against unbeaten Brooklynite Mikkel LesPierre.

Jones III amassed 280 wins as an amateur in just under 300 fights, winning 13 National titles and representing the USA national team in multiple tournaments around the world, and believes his amateur style will translate into titles as a pro fighter.

“My style is hard to beat and it’s going to be the same in the pros,” said Jones III. “My team have a great plan for me and I’m so excited to fight in the UK as well as in the US, it’s awesome to know that I’ve got so many options and fights in front of me. I don’t feel any pressure because I have total faith in my ability, I just can’t wait to get out there and show what I’ve got.”

“Otha’s record speaks for itself,” said Hearn. “I asked people ‘who do we need to sign in the US?’ and the name Otha Jones III came up time and again, they’d say ‘this is the guy in amateur boxing right now that you need in the paid ranks’.

“Otha is going to box eight times in his first year as a pro starting on March 9, all over the world, particularly in the US. He’s an outstanding fighter with a great personality, and we can’t wait for his journey to start.

“We do stadium events and World title fights, but this is sometimes the most exciting thing as you get the chance to grow a fighter from day one.”

Dmitry Bivol and World of Boxing have signed a promotional deal with Matchroom Boxing USA and the Russian will defend his WBA World Light-Heavyweight title against Joe Smith Jr live on DAZN in the US and on Sky Sports in the UK.

Bivol makes the fifth defense of his belt against Smith Jnr after moving to 15-0 (11KOs) in November, with a comprehensive to a points win over former unified champion Jean Pascal in New Jersey. Bivol’s win over the Canadian was the latest impressive name on his growing CV, following a points triumph over Isaac Chilemba, a final round stoppage of Sullivan Barrera and a highlight real first round KO of Trent Broadhurst.

The Russian star will meet a stern test of his ambitions to unify the division in the shape of Smith Jnr (24-2 20KOs) the Long Islander who famously stopped Bernard Hopkins in the Philadelphia legend’s last pro fight in December 2016 and destroyed Andrzej Fonfara inside the opening round of their clash in Chicago six months earlier.

Eddie Hearn presents Bivol vs. Smith Jr in association with World of Boxing, Star Boxing and Main Events – and both fighters and their teams predict fireworks when the pair clash in March, with the date and venue to be confirmed at a press conference in New York this Friday.

“I am glad to finally meet Joe in the ring,” said Bivol. “I saw his fights against Fonfara and Hopkins live and always wanted to test my skills against him! Thank you to World of Boxing, Matchroom Boxing USA, and DAZN – I hope to put a great performance for everybody!

“Very happy to be working with Eddie Hearn, it’s a pleasure!” said World of Boxing’s Andrei Ryabinskiy. “We look forward to a great event together with Matchroom and DAZN.”

“Bivol was supposed to fight Joe back in November, it’s a very exciting fight,” said Bivol’s manager Vadim Kornilov. “Both Dmitry and Joe have a lot of power. I guess this fight was meant to happen and we look forward to a building relationship with Eddie Hearn and DAZN!”

“I am very excited for the opportunity to fight Bivol for the World championship,” said Smith Jr. “Everything I’ve worked for in and out of the gym was to better myself and become a World Champion. All the hard work and my determination will pay off come fight night.”

“Joe Smith Jr. is one of the hardest punching fighters out there,” said Smith’s promoter Joe DeGuardia. “His exciting style and humble background has made him a real fan favorite. I am pleased he will be getting this opportunity to fight for the World Championship. Joe has been anxiously waiting for this opportunity and I look forward the fight.”