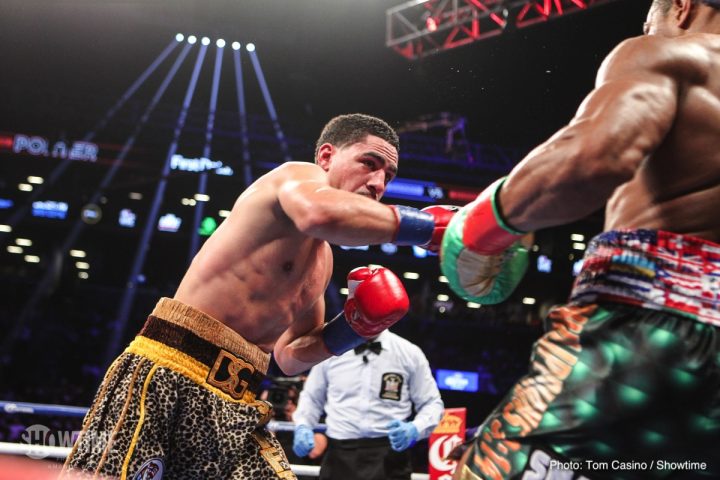 By Mike Smith: Former two division world champion Danny ‘Swift’ Garcia (34-2, 20 KOs) is welcoming his April 20th fight against Adrien Granados (20-6-2, 14 KOs), and he cannot wait to get a rematch with WBA Super World welterweight champion Keith ‘One Time’ Thurman immediately after that. If things go as Garcia plans, 2019 will be a good year for him. Last year wasn’t a good one for the soon to be 31-year-old Garcia.

Danny, 30, lost his last fight against ‘Showtime’ Shawn Porter (29-2-1, 17 KOs) four months ago by a 12 round unanimous decision by the scores 116-112, 115-113 and 115-113. Although Garcia lost the fight by a close decision, he clearly was beaten by Porter in that fight. It’s important for Garcia to beat Granados, and then look to either avenge his loss to Thurman from 2017 or Porter. Garcia has lost two of his last three fights, and his career as an elite level fighter has taken a hit with those two defeats.

“When one door closes another door opens,” Danny Garcia said on his social media in giving a cryptic message. “I’m back in action April 20. I can’t wait 😤”

Thurman’s performance in having to battle hard to defeat Josesito Lopez (36-8, 19 KOs) by a 12 round majority decision last Saturday night has obviously given Garcia confidence that he can beat him if given a shot at a rematch. Thurman doesn’t have an opponent yet for his net fight, but he’s anxious to get Manny Pacquiao to fight him. If not him, then Thurman could turn around and face either Garcia or Porter in rematches. It would be a situation where Thurman would be covering old ground in taking a retread fight with one of those fighters, but it’s all about giving boxing fans entertaining fights. They liked Thurman’s fights against Garcia and Porter in the past, so they won’t mind seeing him fight them again.

Thurman isn’t ready to fight IBF welterweight champion Errol Spence or WBO champion Terence Crawford this year. Thurman says he wants to wait until 2020 before he faces one or both of them. If Thurman still doesn’t fight one of them next year, then it’ll be clear that he doesn’t fancy those fights, which is probably already quite clear.

It’s doubtful that Garcia will get a rematch with Thurman this year. If anything, Premier Boxing Champions will match Garcia up with either Manny Pacquiao next or Adrien ‘The Problem’ Broner. They’re going to keep those fighters in house. Pacquiao-Garcia or Garcia vs. Broner are good fights that the boxing public will definitely want to see in 2019. It doesn’t matter that Broner and Garcia’s careers aren’t looking all too great right now. The fans remember those two when things were going good for them. Garcia can’t take too many more losses for him to be taken seriously by boxing fans, and the same goes for Adrien, whose career is in bad shape after losses to Pacquiao, Mikey Garcia and Porter, and a draw with Jessie Vargas.

Garcia is going to have to be careful that he doesn’t get beaten by his next opponent Adrian Granados. Adrien Broner and Porter both had close wins over Granados. Those were not easy victories. Granados put hands on both of those guys. Garcia has won only once in the last two years, and his record is 1-2 going into his fight with Granados. In Garcia’s last victory over Brandon Rios, he took a lot of punishment to the head before stopping him in the ninth round. That was far from an easy fight for Danny.

Garcia also had problems beating Robert Guerrero and Lamont Peterson in 2015. It’s pretty obvious that Garcia is not a major talent at 147 as he was at 140. Without his size advantage that he had when he was fighting at light welterweight, he’s not the fight fighter. Still, Garcia might have too much for Thurman right now. Thurman was almost knocked out by Lopez last weekend. Lopez did a better job against Thurman than Garcia did in his loss to him in 2017.