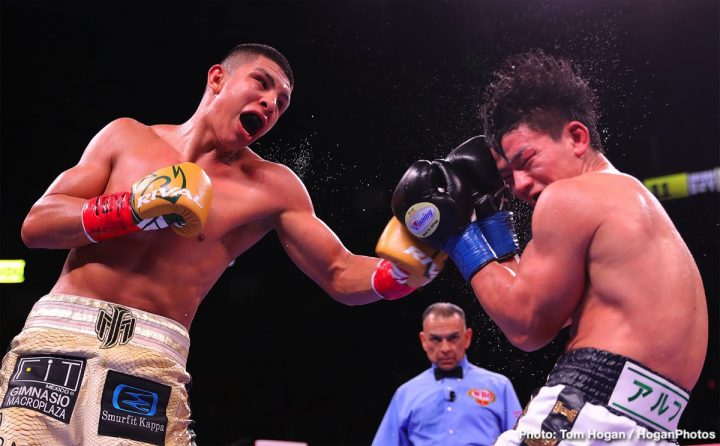 Munguia-Hogan would be another fight to help Munguia, 22, gain more experience before he’s matched against middleweight champion Saul Canelo Alvarez in 2020 or 2021.

Hogan, 33, comes from Ireland and lives and fights out of Australia. This will be Munguia’s fourth defense of his World Boxing Organization, and he’s not expected to make more than two or three more before he moves up to 160 to go after the fight with Canelo. Hogan lacks the punching that he’s going to need to keep Munguia off.

Munguia is an exciting fighter to watch, perhaps more fun to watch than Saul Canelo Alvarez, because he has more flaws and he’s more willing to put his chin on the line in search of a knockout. Canelo isn’t that type of fighter. Munguia is more of a Gennady Golovkin type of prototype. He’s not going to be another Canelo. If anything, Munguia can be another Golovkin, but he’s going to have to learn how to fight like him in order to keep from getting beaten by the top fighters at 154 and 160.

Hogan is ranked #1 by the WBO, but in reality, he arguably should be ranked at the bottom at #15 or even lower than that. The WBO’s ranking of Hogan is a gift for Golden Boy, because it allows Munguia another safe fight before he needs to eventually make a decision whether he should vacate his WBO title once one of the talented contenders like Erislandy Lara becomes his mandatory. Munguia would likely be out-boxed with ease by a talented fighter like Lara.

Munguia’s promoters at Golden Boy Promotions are being careful with Munguia due to his age. His fight against Takeshi Inoue, 29, showed that he’s made some improvements n his game in terms of his movement, and defensive skills, but he needs the requisite skills for him to improve enough to challenge Canelo Alvarez, or face the other talented fighters Jarrett Hurd, Tony Harrison, Erislandy Lara, Jermell Charlo, Demetrius Andrade, Gennady Golovkin, Daniel Jacobs and Sergiy Derevyanchenko.

Munguia got more than he planned on last Saturday against Inoue on DAZN at the Toyota Center in Houston, Texas. Munguia was given a choice headliner spot by Golden Boy Promotions for his fight against Takeshi Inoue. You don’t see fighters getting that kind of visibility this early in their career unless their name is Saul Alvarez. Golden Boy is attempting to make Munguia into a Canelo Jr., and he’s not looking like he’s going to become that kind of fighter unless he can make whole scale improvements.

Munguia beat Inoue by the scores 120-108, 120-108 and 119-109. It was not as one-sided as those scores. Munguia took shots all throughout the fight, and he was forced to turn into the runner in the second half of the contest, which was odd to watch. With Munguia’s size and power advantage, he should have been able to stand his ground and take the fight to Inoue, but he couldn’t do it. Munguia lacked the willingness to stay and fight due to his unwillingness to take punishment. In fairness to Munguia, he was likely following instructions from his trainer in choosing to back off of Inoue. If Munguia had stayed on him the whole time like he did against Liam Smith and Sadam Ali, he likely would have knocked him out. Munguia had the look of someone that was being forced into programming that was against his nature, and his better judgement. Had Munguia fought the way he always has, he would have worn Inoue down and knocked him out. Munguia would have been hit a ton by Inoue in the process, but he would have saved himself from having to go a full 12 rounds against him. Finding a new trainer would be an excellent idea for Munguia.