Canelo could face Andrade vs. Saunders winner in September 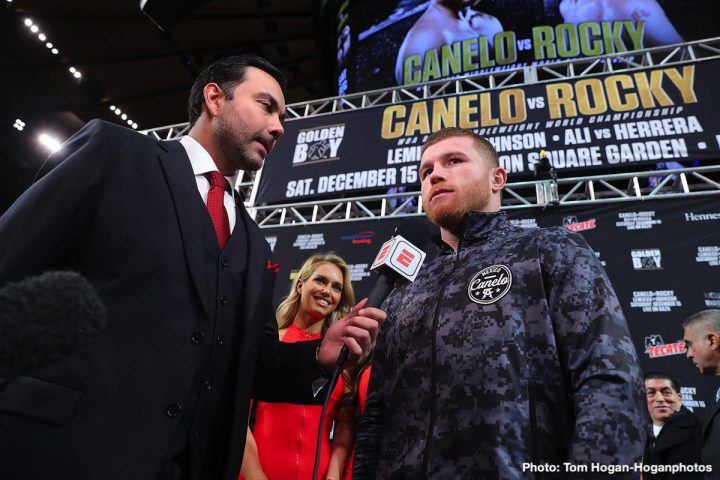 By Jim Dower: Saul Canelo Alvarez might not be fighting former middleweight champion Gennady Golovkin in September of this year like many boxing fans had hoped would take place. Instead, he could go after the winner of the Demetrius Andrade vs. Billy Joe Saunders fight, which is expected to take place in the first half of this year. Andrade (27-0, 17 KOs) has the WBO 160 pound title in his possession, and he’ll be fighting the unbeaten Saunders (27-0, 13 KOs) next.

Canelo’s options for his September fight are as follows: Gennady Golovkin, Billy Joe Saunders, Demetrius Andrade, Jermall Charlo, David Lemieux and Jaime Munguia. Canelo isn’t likely going to fight Charlo or Munguia. Charlo is too tough right now, and Munguia is still being built up by Golden Boy. That leaves GGG, Andrade and Saunders. Those two will be fighting soon, so one of them will be weeded put. Golovkin likely won’t be chosen due to him likely wanting more than Golden Boy will be willing to pay him. Golovkin hasn’t decided if he’ll sign with DAZN, ESPN or Showtime. He’s nearing the end of his career, so he’ll likely sign for whoever pays him the best. If Golovkin makes nearly the same amount of money that he’d get with DAZN in signing with ESPN or SHOWTIME, it’s possible he might choose to sign with one of them. On ESPN or SHOWTIME, Golovkin can fight on pay-per-view, and make good money. If Golovkin sighs with DAZN, he wouldn’t be fighting on PPV, as there’s no PPV with them. If DAZN can give GGG a big enough contract to where it doesn’t matter that he’s not fighting on PPV, then it’s possible that he could see it as worth it to sign a contract with them.

Additionally, Golovkin is risky fight, as he could beat Canelo, and possibly even knock him out in the process. He clearly got the better of Canelo in the first fight. Their rematch last September appeared to be a draw despite Canelo winning. Of major concern is the fact that Canelo took punishment against GGG, a lot of it, and that’s not what Golden Boy wants. They want Canelo to win his fights without getting hit a lot, and hurt like he was against Golovkin. To be sure, Canelo will probably fight Golovkin again, but not until 2020. That would make it three years since the first fight between them. If the third Canelo-Golovkin fight takes place in May or September 2020, it’s difficult to imagine Golovkin still being the same fighter he was last September, especially if he has a hard fight or two before he faces Alvarez in a trilogy match.

Canelo (51-1-2, 35 KOs) is interested in unifying the middleweight division. Hes already captured GGG’s IBF/WBC titles last September. If Canelo defeats IBF 160 lb champion Daniel Jacobs (35-2, 29 KOs) in their fight on May 4, he’ll have 3 of the 4 middleweight titles in his possession. It’s not going to be easy for Canelo to win his unification fight against Jacobs, 31, because that’s a guy with size, speed, power and experience. Canelo could lose that fight by knockout or even by a decision. Canelo is considered a safe bet to win the fight against Jacobs if it goes to the scorecards, because Golden Boy are likely to to negotiate to make sure the fight takes place in Las Vegas, Nevada. Canelo does not lose in that city any longer. He’s been invincible in Las Vegas since getting beaten by Floyd Mayweather Jr. there.

If Canelo beats Jacobs, the only title not in his possession will be the WBO held by Anrade. Andrade and Saunders now fight on DAZN, which will make it a simple matter for Canelo’s promoters at Golden Boy Promotions to setup a fight against the winner of their match. With Andrade and Saunders being undefeated, it will give Canelo the chance to fight an unbeaten WBO belt holder in September on the Mexican Independence Day holiday with all 4 middleweight titles on the line for the fight.

Canelo needs to get past IBF champion Jacobs on May 4, and then he’ll have the opportunity to take another big fight in September against Andrade or Saunders. 2019 will be taken care of for Canelo in terms of interesting fights to stream on DAZN. After having beaten GGG already by a 12 round decision last September, Canelo’s goal is to unify the middleweight division in 2019. What his goal is beyond 2019 is unclear. Canelo isn’t going to move back down to 154, because it’s too hard for him to drop weight to fight in that weight class. If Canelo decides to move up to 168 to try and unify that division, he’ll need to go after WBO champion Gilberto ‘Zurdo’ Ramirez, IBF champion Caleb Plant and the winner of the Anthony Dirrell vs. Avni Yildirim to capture the WBC 168 lb title.

Canelo, 28, will start training next month in February for his fight with Jacobs. Canelo will be in San Diego, California to prepare for the fight. Canelo will need to figure out how to deal with the size of the nearly 6’0″ Jacobs. Golovkin was only 5’10 1/2″, and not as tall, long armed or as mobile. Golovkin’s poor mobility made it easy for Canelo to escape his pressure, and also it was easy to walk him down. When Canelo decided to come forward in the rematch, he was able to walk Golovkin to the center of the ring to punish him. Although Golovkin never did get backed up to the ropes, he still got worked over at times by Canelo. Jacobs will make it harder for Canelo to have the same kind of success against him, because he can move well, jab and punch. Canelo will need to have quick feet for him to get to Jacobs. What Canelo has going for him is his two controversial fights with GGG. Jacobs will have seen those fights and might figure out that beating Canelo by a decision could be impossible. His popularity coupled with the location of the fight, which figures to be Las Vegas, might put Jacobs behind the eight ball when it comes to trying to win a decision.