Keith Thurman: “I don’t owe them [fans] nothing” 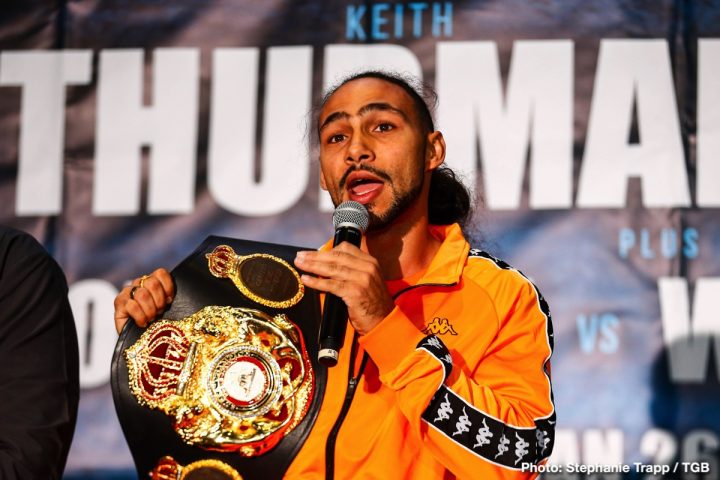 By Mike Smith: Keith ‘One Time’ Thurman got upset at the final press conference on Thursday when questioned by the media about whether he owes it to the boxing fans about him being out of action for a prolonged period of time, not fighting. Thurman (28-0, 22 KOs) made it clear that he owes the fans nothing, and that he’s given his body to them and the sport by putting it on the line for his fights. Thurman made it clear that he’s the “entertainment” for the fans, so he doesn’t owe them anything.

Thurman will be defending his WBA Super World welterweight title against Josesito Lopez (36-7, 19 KOs) this Saturday night on Premier Boxing Champions on FOX at the Barclays Center in Brooklyn, New York. This fight marks the first time that Thurman will have fought in 23 months, just shy of two years. Thurman, 30, has been out of the ring with two injuries, one to his right elbow and the other to his left hand. He’s now healed and read to resume his career. He wants to stay healthy and fight the likes of Errol Spence Jr., Shawn Porter, Manny Pacquiao, Floyd Mayweather Jr. and Danny Garcia. Whether he fights any of those guys will depend on how he does against Lopez on Saturday night, and whether he can stay healthy.

“What do you mean? I didn’t take out a loan. What do I own you? Do you know what I mean? Thurman said when asked if he feels like he owes the boxing fans anything after missing two years of action. ”What is ironic with the questions you come at me with is you forget I’m your entertainment, win lose or draw, knock the guy out or I get knocked out. It don’t matter. I’m your entertainment. So how do I owe you anything when I’m your entertainment? I’m already giving you this body. I went through injury. What are you going to do for me? I’m going through injury, and I’m still here to fight on. I gave y’all the belt [WBC welterweight title]. I gave away the WBC. I let you guys see a great fight [against Danny Garcia]. Who knows if that fight would have happened without a belt on the line,” Thurman said.

Thurman will likely continue to do well as long as he doesn’t face Terence Crawford and Errol Spence Jr. When he fights those guys, his time as an unbeaten champion will likely be up. Thurman has had a good unbeaten run, but let’s be serious; he hasn’t fought the best guys. He barely beat Danny Garcia and Shawn Porter, and he was backing away from both and nearly running. It wasn’t ‘One Time’ that the boxing fans saw in those two fights. He was retreating a lot, and it looked ugly. It was the opposite of how Spence fights.

There are major questions that will be answered on Saturday about how Thurman’s two injuries and his long two year layoff will impact his physical skills and career. Two years is a long time for any athlete to be out of the sport. Thurman was barely better than Danny Garcia and Porter before the two year layoff. It’s hard to imagine Thurman still being better than those two guys, and it goes without saying that he’s probably not going to be able to hang with Spence and Crawford when/if the time comes for him to fight them.

“I don’t know where some of these questions are from,” Thurman said. “If you’re a fight fan, tune in. I pay $15.99 for Netflix. When there’s entertainment, you pay for it. This is commerce. It’s simple math. It’s simple numbers. That’s why I love boxing. I wish I’d accomplished more. I wish I wasn’t injured. This is a comeback moment for Keith Thurman in life. Love me or hate me, but I hope you respect me,” Thurman said.


« Canelo could face Andrade vs. Saunders winner in September