Munguia being groomed for Canelo fight 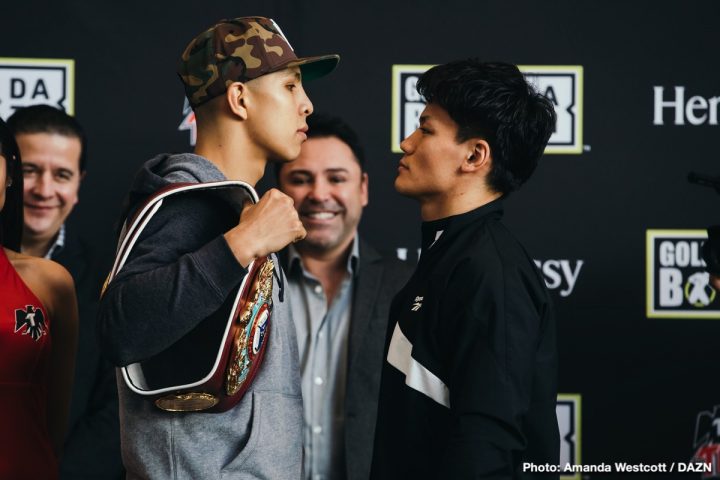 By Sean Jones: WBO junior middleweight champion Jamie Munguia (31-0, 26 KOs) is being groomed by his co-promoters at Golden Boy Promotions and Zanfer Promotions for a fight against Saul Canelo Alvarez in the future. Munguia will be defending his title this Saturday night against Takeshi Inoue (13-0-1, 7 KOs) on DAZN at the Toyota Center, Houston, Texas.

It’s still too early for Munguia to take on Canelo. Munguia will still need to move up to 160, and then establish himself as a worthy opponent for Canelo in the eyes of the boxing public before a fight between them can be considered a good match-up by the boxing fans, both casual and hardcore. Golden Boy likely won’t wait too long before they match Canelo against Munguia.

The reality is that they can’t wait. Canelo will soon run out of viable opponents for him to fight at 160, and he’s going to need to popular guys for him to fight to bring in the subscribers to DAZN. That streaming giant is paying Canelo a ton of money. They’re not going to want to see him fighting soft opposition over and over again. Munguia is a name, and he’ll likely be more popular by the time that Canelo fights him in a year or two.

Boxing fans see Inoue, 29, as a hand-picked opponent in a showcase fight for Munguia. Inoue has not shown the kind of talent during his career that would put Munguia in any any danger of losing the fight. If Munguia wins this fight, he’ll next be defending against his WBO mandatory challenger Dennis Hogan (28-1-1, 7 KOs). This is same type of opponent that Inoue is in terms of talent. In other words, Hogan is a guy that has beaten no one, and is not a threat to Munguia. Hogan, 33, has fought obscure opposition most of his eight-year pro career. In 2015, Hogan stepped it up a level and fought Jack Culcay and was easily beaten by a 12 round unanimous decision. After that loss, Hogan went back to fighting obcure fighters, and he’s won his last

Golden Boy is putting Munguia, 22, in winnable fights for the time being to help make sure he gets to the fight fight WBA/WBC middleweight champion Canelo in one piece without suffering a loss. Munguia will be defending his World Boxing Organization

“He definitely wants Canelo, but only time will tell,” Golden Boy Promotions president Eric Gomez said to ESPN.com. “If Jaime keeps passing these tests and doing what he is supposed to and getting the experience, eventually that will be a big fight down the line.”

The way that Munguia looked recently in beating Liam Smith, it would be smart if Golden Boy and Zanfer Promotions don’t put him in with any of the lions at 154, like Jarrett Hurt, Jermell Charlo and Erislandy Lara. When Munguia does move up to 160, it would also be smart not to have him fight Gennady Golovkin, Demetrius Andrade or Daniel Jacobs before he’s put in with Canelo. There’s too much potential for Munguia to lose to those guys. He didn’t look that good in beating Liam Smith July.

Munguia won a 12 round unanimous decision by the scores 116-111, 119-108 and 117-110. However, the fight was closer than the scores would have you believe. Munguia struggled against Smith, who is probably no better than the 10th best fighter at junior middleweight. Munguia should have been able to beat Smith with ease if he was one of the true lions are 154, but he couldn’t do it. What that tells you is Munguia has major flaws in his game right now that will need to be fixed before he faces the better fighters, if he ever does.

Those are not the elite level fighters in the junior middleweight division. Those guys are the food for the elite guys.

Gomez goes on to say that Canelo will be the one that determines whether he faces Munguia or not. He obviously will choose to fight Munguia, because he’s got that big $365 million contract with DAZN, and that means he needs guys that can bring in the ratings/subscribers. Munguia could help Canelo achieve that goal by fighting him two or three times, if their fights are competitive like Alvarez’s two fights with Gennady Golovkin.

“It will come down to Canelo’s decision,” Gomez said.

It’s very unlikely that Canelo will reject a fight with Munguia for the reasons mentioned above about him needing to fight guys that can bring in subscribers. It would be in Canelo’s best interest to fight Munguia as soon as possible while he’s still young and green. Once Canelo starts aging, he’s not going to want to fight a prime Munguia with the punching power, size, and engine that he has going for him.