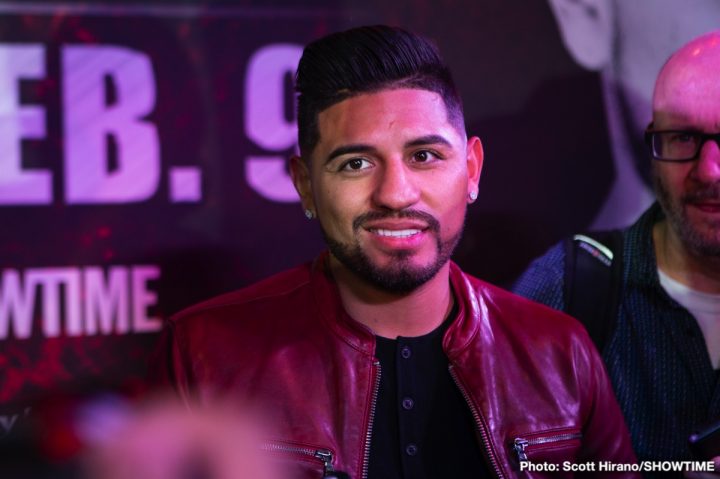 Some boxing fans will see this injury as a way for Mares to get out of what likely would have been a beating from Gervonta. Mares was a huge underdog, and it wasn’t a question whether he would lose or not. It was more of a question of how badly it would be. There are a lot of fans that think Gervonta would make easy work of Leo Santa Cruz. Mares has twice to him.

Davis, 23, and the card will still go ahead for February 9. They’re looking for a replacement opponent for the young you knockout artist Davis to fight, according to ESPN. They could have someone as early as Wednesday to face Davis.

Given Mares’ age [33], it’s not all that surprising that he suffered an injury during training camp. At that age, anything can happen. Mares is an aging fighter, and he’s coming off of a one-sided 12 round unanimous decision loss to WBA Super World featherweight champion Leo Santa Cruz last June. That was Mares’ second loss to Santa Cruz. Going up in weight to challenge Gervonta would have been a tough ask for former three division world champion Mares. Although Mares is a highly talented fighter, his best weight class was at bantamweight [118], and he’s not looked nearly as good in fighting at 126, even though he’s had success in that weight class in winning the WBA World 126 lb title. Since moving up to featherweight in 2013, Mares has beaten the following fighters:

It’s unknown whether Mares will look to reschedule a fight against Gervonta for a later time. If Mares wants that fight badly enough, he can certainly do it, but it’s probably not a good career move for him unless he’s just thinking about the nice payday he’d get in taking the Davis fight.

Davis needs to be fighting better opposition than Mares anyway. WBA ‘regular’ super featherweight champion Alberto Machado is the guy that boxing fans want to see Davis fighting, not an old timer like Mares, who is past his prime, coming off of a loss, and would have been fighting in a division that he’s never competed in. Machado is young, can punch, and wouldn’t be at a size and power disadvantage the way Mares would have been.