Terence Crawford: “They don’t give me no credit” 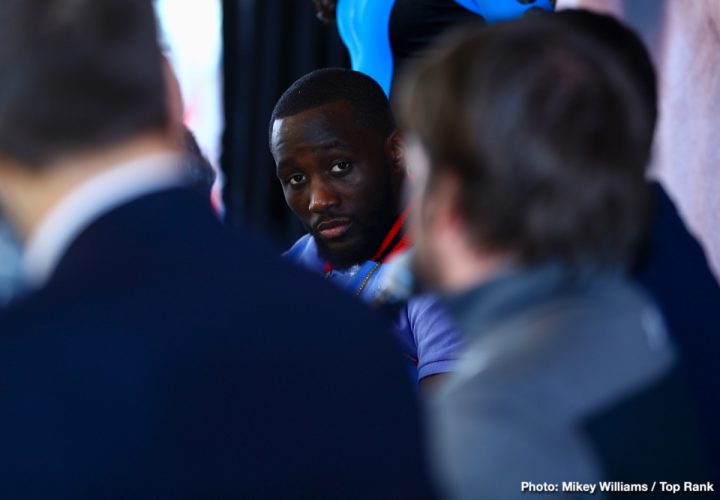 By Chris Williams: Terence Crawford went on a major rant on Tuesday, complaining about how he’s not been given credit from the boxing public for his wins over undefeated champions like Jeff Horn, Jose Benavidez, Viktor Postol and Yuorkis Gamboa. Crawford (34-0, 25 KOs), who will be defending his WBO welterweight title against Amir Khan (33-4, 20 KOs) on April 20 on ESPN PPV, thinks that other fighters at welterweight are given more credit than he has for their wins.

“They don’t give me no credit,” Crawford said about the fans on his Instagram page. “They say Danny Garcia beat the boogeyman Lucas Matthysse. I say how can you beat the boogeyman when he didn’t beat nobody. [Josesito] Lopez brought the head to [Keith] Thurman. You got to give him credit. He came to fight. When I jump on those undefeated fighters with no losses, before I fight them, they say, ‘he’s this, he’s that.’ But when I beat them, [I don’t get credit]. They made Kell Brook seem like a killer. Who did Kell Brook fight besides [Shawn] Porter? He got knocked out by GGG. Porter and GGG [are the only guys Brook fought]. So how was he considered one of the top welterweights in the division when he only beat Porter? The only people I fought was undefeated champions at welterweight. But I don’t fight nobody. They want to give [Manny] Pacquiao all the credit in the world for fighting people, but they don’t want to give me no credit for stopping Jeff Horn. He busted up Pacquiao. The fight shouldn’t have been that close if Jeff Horn was a bum. Pacquiao should have did what I did and get him out of there. Did he do that? No. He went to war with that man, and got busted up by that man. He got pushed around like a little kid by that man,” Crawford said.

The reason Crawford didn’t get credit for beating Horn is because the Australian isn’t that good of a fighter. Horn was also knocked out in the ninth round by a 40-ish Pacquiao in their fight in 2017. Pacquiao was seen as the winner in that fight. Horn’s win over Pacquiao was controversial, as many boxing fans saw it as hometown decision for him. Horn got away with a lot of fouling as well.

“Jeff Horn and Errol Spence were considered two of the biggest welterweights, but they’re [the boxing fans] not going to give me no credit,” Crawford said. “They going to say that Jeff Horn is a bum. Everybody I beat, they’re going to say he was a bum. If I beat one of the other top welterweights, they’re going to say he was a bum, and he was washed up, and he was overrated. [Yuriorkis] Gamboa was undefeated, and an interim champion at 135 [when I beat him]. They talk bad about [Julius] Indongo. Indongo knocked out two champions, not one,” Crawford said.

Crawford’s defense of Indongo falls on deaf ears as far as the fans go. Indongo was knocked out by Regis Prograis in two rounds in March of last year. Some fans made a big deal about Crawford stopping Indongo in the third round in August of 2017, but once Prograis did a better job of stopping him, then the fans put things in perspective. They realized that Crawford isn’t as good as they originally thought he was. Prograis points out himself that Crawford didn’t beat the good guys in winning four world titles at 140. He beat Indongo, Dulorme and Postol. Those guys are nowhere to be found among the best at 140 in this era. Prograis says he wants to fight Crawford. Whether Crawford’s promoters at Top Rank Boxing will allow Prograis to fight him is unknown.

“No disrespect to Terence Crawford but when he won all four belts, he had it easier than it is now,” Prograis said to wbcboxing.com. “I`m a competitor, and one day I want to fight Terence.”

It would be nice if Prograis fights Crawford before he loses to one of the talented welterweights like Errol Spence Jr. At least if Crawford fights Prograis, he’ll get a chance to show what he can do against a true talent at 140 rather than the guys that he was matched against by his promoters at Top Rank in winning his four belts. The light welterweight division is so much better now than when Crawford won his titles. Overnight, the division improved to the level where it’s unclear whether Crawford would even have a place as a champion. There are so many better fighters now than during Crawford’s short reign as the unified champion. In hindsight, it was perhaps a wise move for Crawford to move up to 147 to take advantage of a situation where there was a weak champion holding down the WBO welterweight title in Jeff Horn, who is promoted by Top Rank. Had Crawford stayed at light welterweight, he might have lost to Prograis, Jose Ramirez, Josh Taylor, Maurice Hooker, Ivan Baranchyk and Kiryl Relikh.

Gamboa was at his best when he was fighting at featherweight. Gamboa wasn’t at his best when he moved up to lightweight. Gamboa looked poor at that weight. For Crawford to beat him at lightweight in 2014, it looked a win based on him having a huge size advantage. Gamboa is not the same fighter at 135 as he was when he was fighting at 126. Crawford struggled badly against Gamboa until the fifth round. That was by no means an impressive performance by Crawford. He was staggered by Gamboa early on, and losing the fight. The same goes for Crawford’s win over Thomas Dulorme in 2015. For the boxing fans that still remember that fight, Dulorme was giving Crawford all he could handle in the first five rounds before getting stopped in the sixth. At the time of the stoppage, the scores were 48-47, 48-47 for Crawford, and 48-47 for Dulorme. A talented guy like Errol Spence Jr. would have trounced Dulorme. It wouldn’t have been an even fight for five rounds like the Crawford-Dulorme fight was.

If Crawford wants the boxing public to start giving him credit for his wins, then he needs to face better guys than what he’s been doing. Crawford’s upcoming fight against Khan is a perfect example of the weak match-making that’s being done for him. At the very minimum, Crawford should be fighting the likes of Shawn Porter or Danny Garcia. He’s not even doing that. To prove himself and get credit from people, Crawford needs to fight the likes of Spence and Keith Thurman. Once Crawford starts beating those guys, he’ll get all the credit in the world. If the politics of boxing are preventing those fights from happening for Crawford, then he’s going to need to do what past fighters have done in going up to 154 or 160, and taking on lions like Jarrett Hurd, Jermell Charlo, Jermall Charlo, Tony Harrison, Gennady Golovkin, Saul Canelo Alvarez, Erislandy Lara, Jaime Munguia, Kell Brook, Takeshi Inoue, Demetrius Andrade, Sergey Derevyanchenko, Rob Brant and Maciej Sulecki. Crawford can’t become popular on the cheap by beating guys like Khan and Benavidez. That’s not going to work. The boxing public knows those guys aren’t major players. Fighting Benavidez would be fine for Crawford if it were David Benavidez,” not Jose Benavidez. There’s a big difference in talent between those two brothers, and the credit that Crawford would receive. Crawford has got to stick his neck out if he wants to be given credit from fans for his victories, and that mean he needs to take risks with his career by fighting the actual best, and putting himself in a position where he can lose. Look at Mikey Garcia. He’s moving up two weight classes to fight Spence at welterweight. Why can’t Crawford do that? If Crawford moves up two weight classes, he can fight Canelo, GGG, Andrade or Daniel Jacobs. If Crawford lose, then so what. At least he’ll be noticed by the boxing world instead of ignored due to him fighting shot guys like Khan or guys that few casual fans have ever heard of like Jose Benavidez.

Boxing » Amir Khan » Terence Crawford: “They don’t give me no credit”