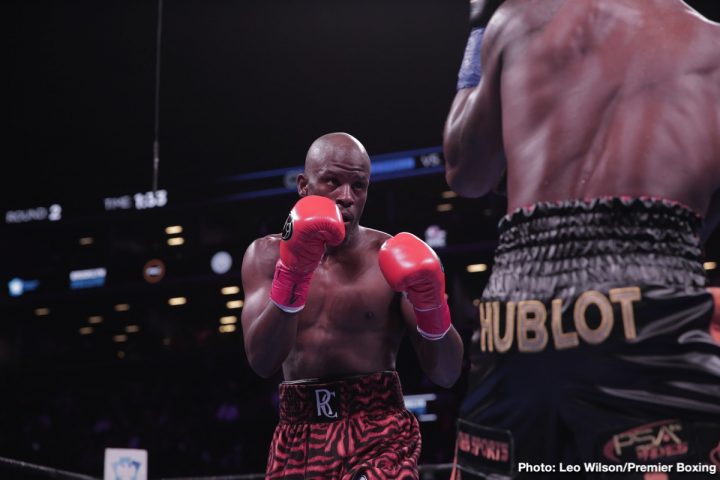 The judges scored the fight in Harrison’s favor by the scores 115-113, 115-113 and 116-112. However, the commentators on FOX scored it for Charlo, and it appears that a lot of boxing fans also agreed with them.

“If it’s not [Jarrett] Hurd, then it’s Charlo. If it’s not Charlo, then it might be someone like Kell Brook,” Harrison said to Thaboxingvoice in talking about his next fight. “That’s probably the last option for me. I even heard Errol Spence might move up.”

This is arguably Brook’s best chance of winning a world title at junior middleweight, if he chooses to push for the Harrison fight. Brook’s promoter Eddie Hearn of Matchroom Boxing wants him to fight Amir Khan in March or April. That’s the fight that Hearn wants. If Hearn can’t make the Khan-Brook fight for the first quarter of 2019, then it’s possible that he might let Brook go after a fight with Harrison for his World Boxing Council 154 lb title. Unfortunately, there’s a small window for Hearn to try and setup the Brook vs. Harrison fight, and it’s likely that he’ll miss it. Hearn’s is trying to make the bigger money fight for Brook against Khan, and that’s the one that he’s going to focus on.

This would be a risky fight for Brook, as Harrison has excellent punching power, a great jab and good boxing skills. The 6’1″ Harrison would have a considerable size advantage over the 5’9″ Brook. Harrison would have a four inch height and a six inch reach advantage. Brook is a good fighter, but he’s not been facing guys with the kind of height and reach that Harrison would have over him. It’s likely that even if Hearn was on board with making the Harrison-Brook fight, Brook wouldn’t go for it due to the risk involved for him. The 32-year-old Brook isn’t a spring chicken. If he takes on Harrison and winds up getting out-boxed by him or stopped, then his fight with Khan will lose whatever little luster is left, and it might not be still doable. Khan is barely interested in fighting Brook now. If Brook loses to Harrison, then whatever little desire that Khan had i facing him would be all but gone.

“I won the fight, man,” Harrison said thaboxingvoice. “When three judges say you lost the fight, you got your ass whipped. It wasn’t no split decision. Sometimes you got to take defeat. This experience for him was just a humbling. He still wants to be in the driver’s seat, but just sit down and play your role. I told you in the ring that I’ll give you a rematch, but don’t make it seem like you’re in control, because you’re not. You can only control the people around you. He [Jermell] lives in a dream world, man. I don’t even pay attention to what he do and what he say. I never have, I never will. I feel like I dominated that man. But since the world is calling it a controversy, I’m going to do it for legacy. Sometimes you’ve got to do it for the legacy, and I’m going to do it again just for that,” Harrison said.

Jermell has a rematch clause in his clause in his original contract with Harrison, and he reportedly plans on executing it. This is the type of loss that Charlo cannot walk away from. His reputation would be in tatters if he moved on without trying to avenge his loss. It’s not a good situation for Charlo right now after the way he and his brother Jermall Charlo were both exposed in their fights last Saturday night. Jermall was given a controversial 12 round unanimous decision win over Matt Korobov, but Jermell didn’t have the same luck. Both Charlo brothers lost a lot of cache in the eyes of the boxing fans. They struggled against fighters that they were supposed to dominate. Korobov, 35. was a replacement opponent, who wasn’t supposed to win, but did in the eyes of a lot of people. Both Charlo brothers emerge from their fights last Saturday with less hype than when they came in. Before their respective fights, the Charlos were seen by some boxing fans as the best fighters in their divisions. Not anymore though. Jermell was beaten, and so was Jermall. Jermell will get a rematch with Harrison to show that it was just an off night for him, but it’s too late to undo the damage. IBF/WBA junior middleweight champion Jarrett Hurd was hoping to fight Jermell next, but now he’s talking about moving up to middleweight. Hurd already beat Harrison, so there’s no point in fighting him a second time. If Jermell can’t beat Harrison in the rematch, then Hurd has no other choice but to move up to 160 to seek out bigger fights. He had been planning on moving up to 160 shortly anyway, but Jermell getting beaten has likely sped up his timeline for moving up.

“I’m not going to do it for him like he’s in control,” Harrison said. “I want it just as quick as he do. 10 times out of 10, I’ll beat that kind of fighter every single day. He had the public hyped up in who he was. The real people see right through the kind of person he is. Like I said, I’ve seen that kind of fighter in the gym all the time since I was a kid. He’s got a basic game, an Eric Snow type of guy. He don’t make any adjustments. He’s a good fighter. He’s just good. He don’t do nothing great or anything. I’ve seen that type of fighter in the gym at Kronk [in Detroit] every single day. I want the rematch just as bad as he do just for the fans. He keeps running his mouth like he’s in control. I want it again just like he do. I just told him in the ring, ‘you can get your rematch. You gave me the shot, and I’ll give it right back.’ That’s the type of guy I am. I’m not the type of guy that wins a belt, and I’m like, ‘I’m on to bigger and better things.’ Let’s do it again if the fans want it again. I told him after the fight, ‘let’s do it again.’ I never told him some s–t like that. I know I won,” Harrison said in addressing the comment that Charlo had said about him admitting that he lost to him.

Since it’s unlikely that Kell Brook’s promoter Eddie Hearn is going to let him fight Harrison, then that leaves Charlo and Hurd. Charlo wants the rematch. The only question is will he attempt to use his A-side pull to get the fight in Texas. There’s talk of Charlo wanting to have the rematch with Harrison take place in his home state of Texas. Harrison says he won’t do that unless he gets crazy money.

Hearn says Dillian Whyte is frontrunner for Joshua’s next fight »