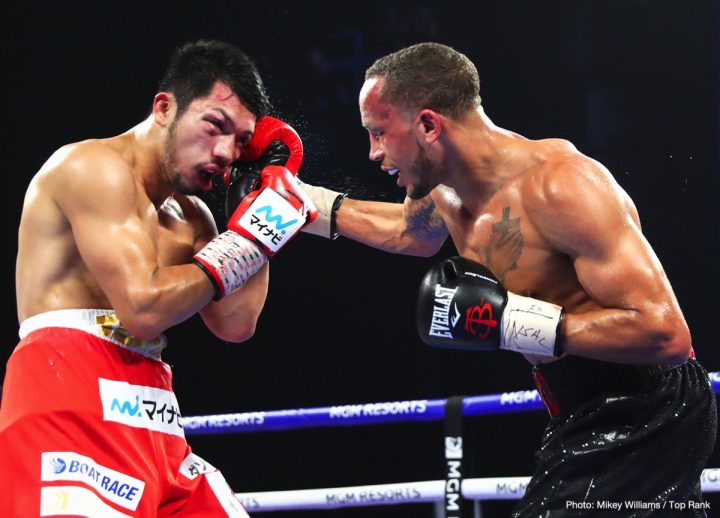 By Jim Dower: Former WBA World middleweight champion Ryonta Murata (14-2, 11 KOs) plans on continuing his career after losing his WBA title to Rob Brant (24-1, 16 KOs) by a one-sided 12 round unanimous decision on October 29 in their fight on ESPN in Las Vegas, Nevada. Murata, 32, says he’s not sure which division he plans on fighting in. He’s got to make a choice between 160 and 168.

The 2012 Olympic gold medalist Murata wisely chose not to use contract option to face Brant in a rematch, according to Dan Rafael. It’s a smart move on Murata’s part not to fight the 28-year-old Brant a second time, as the way that he was beaten last October, he likely lose to him again. Brant used a high volume attack to beat Murata with ease. Brant averaged 100 punches thrown per round, and there was little chance that Murata could increase his punch output enough for him to have a reasonable chance of beating Brant in a rematch. Murata lost the fight to Brant by the scores 118-110, 119-109 and 119-109.

“When the fight was over, I once thought I would retire from boxing,” said Murata via ESPN at a news conference this week. “Then my determination was 98 percent sure. I won’t make the Brant bout my last performance. I’d like to climb up to the ring with the world belt on the line again.”

The loss to Brant cost Murata a big money fight against former middleweight champion Gennady Golovkin in Tokyo, Japan. There was talk of the two middleweight champions facing each other. The loss for Murata and the subsequent defeat by GGG to Saul Canelo Alvarez has temporarily sidetracked those plans. There’s still a possibility that Murata and Golovkin can meet down the line, but obviously this wouldn’t be a good time for them to face each other.

A move up to 168 might be an option for Murata, although he could have problems with some of the bigger guys in that weight class. Murata wouldn’t have to worry about fighting anyone that has the same high work rate as Brant, but he’ll still have problems trying to beat guys like Gilberto ‘Zurdo’ Ramirez, Callum Smith, Jose Uzcategui and David Benavidez.

Murata won the World Boxing Association ‘regular’ middleweight title last year in beating Hassan N’Dam by a 7th round knockout in their rematch on October 22, 2017. In Murata’s only successful title defense, he beat Emanuele Felice Blandamura by an 8th round knockout last October. Murata didn’t do much as the WBA champion unfortunately.

If Murata stays at 160, he’s going to have some problems trying to beat IBF belt holder Daniel Jacobs, WBO champion Demetrius Andrade and WBA/WBC champion Saul Canelo Alvarez. Those are tough fighters with loads of talent.