Ryan Garcia talks about improvements with Eddy Reynoso after win 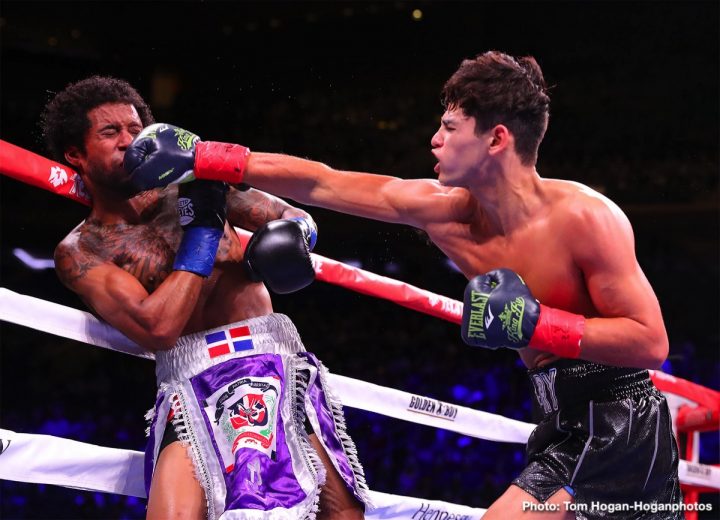 By Mike Smith: Ryan Garcia (17-0, 14 KOs) looked cool, calm and composed in beating Braulio Rodriguez (19-4, 17 KOs) by a 5th round knockout in a bout that took place at lightweight last Saturday night on DAZN at Madison Square Garden in New York. The time of the stoppage was at 1:14 of round 5. Referee Ron Lipton waived it off immediately upon seeing how hurt Rodriguez was from Garcia’s big shot.

The fight was obviously a showcase job for Ryan Garcia, but he still looked very good. The things that Garcia showed in beating Rodriguez were ones that would work against better opposition.

Ryan wasn’t loading up on his shots the way he had been doing. In the 5th, Garcia caught Rodriguez with a perfect left hook to the head that knocked him out cold. It was the second knockdown of the fight for the young fighter, and it looked so effortless.

The knockout punch that Garcia landed looked like he wasn’t even trying to put a lot of power on it. The form and the snap on the shot generated all the power. There was no way that Rodriguez was going to be able to take that kind of shot. Earlier in the fight, Garcia dropped Rodriguez in round 1 with a short left hook.

Garcia, 20, was picking Rodriguez apart with nice counter shots, and lighting him up with left hooks. Rodriguez, 30, was walking into a lot of shots with the way that he was throwing crazy punches. He was trying to knockout Garcia with every shot he threw, and that made him vulnerable.

The improvements in Garcia’s game that new trainer Eddy Reynoso has made has him looking considerably better than he was in his previous two fights against Carlos Morales and Jayson Velez. To Garcia’s credit, he realized that he needed extra help to take his game to the next level. That’s why he chose to switch trainers to Reynoso, who also trains middleweight champion Saul Canelo Alvarez. In the short amount of time that Reynoso has been working with Ryan Garcia, he’s an exceptional job.

Garcia looks so much better from this compared to his previous matches. He’s not as wild, and he doesn’t look as frantic and desperate to try and KO his opponents. Garcia is boxing now, and letting the knockouts come instead of trying hard to destroy his opponents. Garcia is never going to be a pure knockout guy like Gervonta ‘Tank’ Davis. He’s not that kind of a puncher. Garcia is better off boxing a pure boxer like Miguel Berchelt, and letting the knockouts come from his skills.

“I don’t want to name drop, but I’m just going to be the person I am, and say, I look forward to my future,” Ryan Garcia said to Fighthub after his win over Rodriguez. “The electricity in the arena [at Madison Square Garden] was crazy. The fans were cheering me on. That gave me the confidence to do what I did. I showed a lot. I didn’t have to use my footwork in this fight, just because he didn’t put that much pressure, but it was okay. I was calm, I was composed, and that’s what I was focused on,” Garcia said.

It doesn’t do Garcia any good for him to name drop fighters at this early point in his career. Before last Saturday, Garcia had been calling out Gervonta ‘Tank’ Davis, but in light of his two recent performances against Carlos Morales and Jayson Velez, it looked bad for him to continue to talk up a fight against the inactive Mayweather Promotions fighter. Garcia isn’t ready for that kind of fighter at this point in his career.

“I don’t think I got hit. I didn’t get hit,” Garcia said. I stuck to the game plan, which was to keep the pressure going, and move forward and move my head. I did that. I kept my [left] hand out. I kept my defense where it was supposed to be, and I got the job done. So I feel good,” Garcia said.

Garcia’s defense has always been his biggest flaw. Last Saturday, he looked a lot better in that department, picking off Rodriguez’s shots on his gloves, and getting out of the way of the big punches he was throwing at him. Garcia rarely got hit in the fight, and when he did occasionally take a punch, it was a glancing blow and not one where he was hit cleanly.

The way that Garcia is fighting now, he looks like a can’t miss future world champion. He just turned 20 last August, so he’s got a lot of time ahead of him to continue to improve with trainer Reynoso. The advantage Garcia has is he’s not starting at rock bottom like a lump of clay with Reynoso like Saul Canelo Alvarez did. There’s already massive talent there with Garcia that Reynoso can work with, and improve. This isn’t going to be nearly as tough a job for Reynoso to turn Garcia into a star like it did with Canelo. There are areas in Garcia’s game that Reynoso needs to fine tune, such as his defensive ability, and his bad habit of going all out looking to knockout his opponents.

Garcia’s conditioning looked a lot better last Saturday than it had recently in his last 2 fights. Garcia wasn’t dog tired against Rodriguez like he had been against Morales and Velez. Of course, Garcia wasn’t fighting a guy that was putting a lot of educated pressure on him the way Morales and Velez both did, but none the less, he didn’t show signs of fatigue at all. This was the Garcia that Golden Boy Promotions CEO Oscar De La Hoya had spoken about when he first turned pro. Garcia looked like a world champion in waiting against the Dominican Republic fighter Rodriguez.

The performance by Garcia showed off his great potential. He’s ranked high at super featherweight at #4 WBO and #5 WBA, but he looks better fighting at lightweight. That’s a weight class that is better suited to Garcia’s frame. It’s too much of Garcia for him to be dropping weight to get down to 130. That might be one of the reasons why he didn’t look good against Velez. Having to get down to the 130 lb weigh-in limit for the super featherweight division has got to be hard for Ryan. Garcia needs to take his time. He shouldn’t be expected to fight Gervonta ‘Tank’ Davis, Miguel Berchelt, Alberto Machado, Vasyl Lomachenko or Teofimo Lopez right now. Garcia needs to mature more, and learn from Reynoso before he starts tackling those types of fighters. Garcia is likely going to grow into the 140 lb weight class in the future. He’s 5’10” now, and it’s going to be difficult for him to keep his weight below 140. Garcia might wind up at welterweight in the future. That’s why it’s even more important now for him to focus on his boxing skills instead of trying to become a slugger. He needs to develop more to get him ready for the tougher fighters, and for the 140 and 147 lb weight classes.

“Man, I can’t thank them [Eddy and Chepo Reynoso] enough. They took me in like family. They took care of me good,” Garcia said. “I wanted to show them that I can fight and I am for real.”

It’s going to take a while before all the training techniques that Reynoso uses are fully adapted into his game. Garcia can’t rush things. The things that Garcia did show Saturday was a considerable improvement from the way he’s looked in the past. Most fighters make a big amount of improvement right away with a new trainer. It takes longer for the finer points to be learned. Those small areas that Garcia can learn from Reynoso could make the difference between him being a contender to that of a world champion. It certainly helps Garcia that he gets rub shoulders with greats like Canelo Alvarez. That’s a good thing. 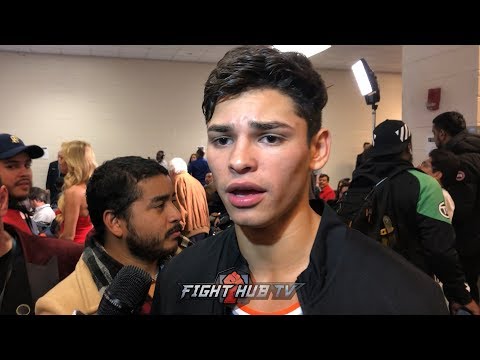 
« WBC rules out Monroe Jr. for Charlo fight on Sat.