Jorge Linares vs. Pablo Cesar Cano on Jan.18 on DAZN 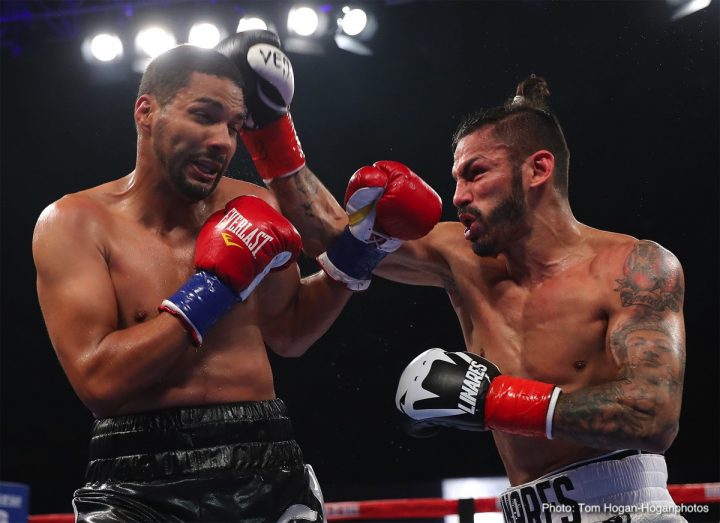 It’s unclear how many rounds the Linares vs. Cano fight is scheduled for. The shorter the better for Linares. He doesn’t need to be going a full 12 rounds against a young puncher like Cano.

Matchroom Sport promoter Eddie Hearn wants Linares to get an easy victory on January 18, and then match him up against World Boxing Organization light welterweight champion Maurice Hooker (25-0-3, 17 KOs) in April or May of next year. Hearn also plans on having former WBO light welterweight champion Chris Algieri (22-3, 8 KOs) fight on the January 18 card, and then bring him back quickly for a title shot against Hooker in February or March.

The 34-year-old Linares moved up in weight to 140 in his last fight in stopping Abner Cotto (23-4, 12 KOs) in the 3rd round on September 29. That was a good first performance for Linares in his first fight at light welterweight. Before that contest, Linares was stopped by Vasyl Lomachenko in the 10th round last May. Rather than staying at 135 and being second fiddle to Lomachenko, Linares moved up to 140 to try his hand against fighters in that weight class.

In moving up in weight to light welterweight, Linares doesn’t need to worry as much about getting out-boxed like he would if he stayed at lightweight. The main thing that Linares has to worry about in the 140 lb division is the huge punchers like Regis Prograis, Ivan Baranchyk, Josh Taylor, Maurice Hooker and Kiryl Relikh. Those guys all hit very hard, and there’s good chance that Linares might wind up getting knocked out by some if not all of them.

Linares will be giving away some size to the 5’7″ Cano. Although Linares, 5’8″, is an inch taller than Cano, he’s not as big as him with his frame, and he doesn’t appear to hit as hard. Cano is younger as well.

The 29-year-old Cano at one time was viewed as a good prospect after starting his pro career at age 17 in 2006. Things haven’t worked out as well as some believed it would for the tough Mexican fighter. He’s lost to Erik Morales, Paulie Malignaggi, Shane Mosley, Fernando Angulo, Alan Sanchez, Fidel Maldonado Jr. and Marcelino Nicolas Lopez. In looking at the way Cano’s handlers have matched him, they did no favors in throwing him in with Erik Morales when he was only 22-years-old and with little experience against world class fighters. To be matched against a guy like Morales at that early stage in Cano’s career was a questionable move. From there, Cano’s management continued to match him tough in putting him in with Malignaggi and Shane Mosley in back to back fights, both of which he lost not surprisingly. In hindsight, it would have been better for Cano not to have been put in with Mosley directly after a loss to Malignaggi. But then again, he shouldn’t have been put in with a guy like Morales either in this writer’s opinion. Cano was basically into the deep end with his career before he was ready for that kind of opposition.

Linares should win this fight based on his boxing skills, but it won’t be easy. Cano is a tough fighter with a good chin and heavy hands. This match will very likely go the full distance. Cano did get stopped recently in the 2nd round by Argentinian slugger Marcelino Nicolas Lopez (34-2-1, 19 KOs) last year in October 2017, but for the most part, his punch resistance has been good throughout his career. Whether Cano handle the precisely placed punches from Linares remains to be seen. That’s going to be tough. Linares has a lot of boxing skills, and there’s no many guys in the 140 lb weight class with his kind of talent.

Cano should give Linares a good idea what he’s going to be up against in fighting at 140. Most of the talented fighters in the light welterweight division are currently tied down with the World Boxing Super Series 140 lb division. We’re talking Regis Prograis, Ivan Baranchyk, Kiryl Relikh and Josh Taylor. If Linares can beat Hooker to win the WBO 140 lb title, then he can face the eventual winner of the WBSS tournament. If Linares can do that, he would be the IBF/WBA/WBO light welterweight champion.

The only title not in Linares’ position at that point would be the WBC strap held by Jose Ramirez. That might be a tough fight for Linares to get, as Ramirez is with Top Rank Boxing, and he fights on ESPN. It would depend on Linares’ promoter and Top Rank whether or not he can take the fight with Ramirez. But at this point all that is just future speculation. Linares needs to worry about Cano first and foremost. He’s the next obstacle in his path.

It was hasty move on Linares’ part to move up to 140 after his loss to Lomachenko. Linares was a good fighter at lightweight, and he still had the option of facing WBC 135 lb champion Mikey Garcia had he stayed at lightweight. Obviously a rematch against Lomachenko wouldn’t have been in the cards for Linares, but he at least should have stuck around at lightweight long enough to fight Mikey Garcia for his WBC title.