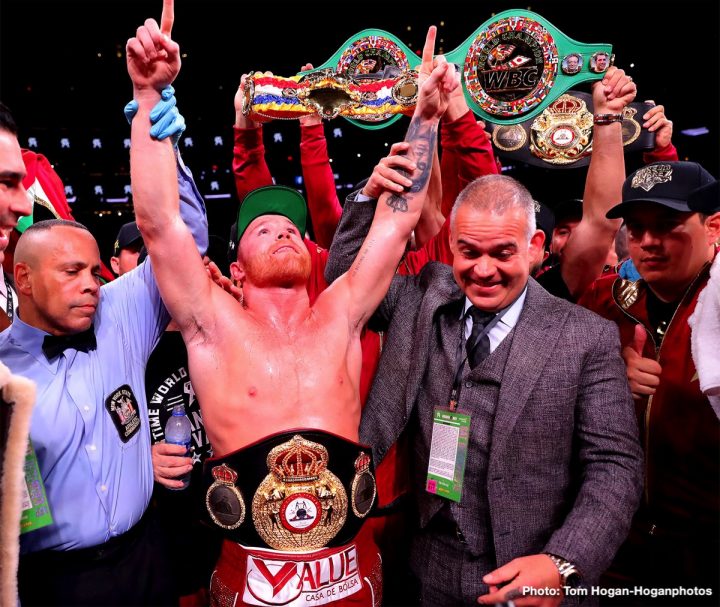 By Sean Jones: Following Saul Canelo Alvarez’s third round knockout victory over Rocky Fielding last Saturday, Matchroom promoter Eddie Hearn says the fight that DAZN wants next for the Golden Boy Promotions star is Daniel Jacobs on May 4. Hearn says DAZN is pushing for the Canelo vs. Jacobs unification fight, and he’s 80 percent sure that it’ll happen. Hearn states he just needs to negotiate it.

According to Hearn, “everyone” wants the Canelo-Jacobs fight. That’s a debatable point. Jacobs (35-2, 29 KOs) is a good fighter, but he’s also someone that has been beaten by Gennady Golovkin and Dmitry Pirog in the past. Jacobs has had a hard time accepting his loss to Golovkin from 2017, and he’s looked poor in his three fights since then against Sergiy Derevyanchenko, Luis Arias and Maciej Sulecki. Jacobs almost lost to Sulecki and Derevyanchenko. Jacobs was so unimpressive in those fights that it’s made it difficult for boxing fans to get excited about seeing him fight Canelo or GGG again.

“It’s the best fight in the middleweight division,” Hearn said to Fighthub about Canelo vs. Jacobs. “You’ve got Danny Jacobs who had a fight with Gennady Golovkin, very close, many people thought he won that fight. He’s now world champion, that’s a unification fight, it’s a real middleweight matchup. That’s the one that myself, Keith Connolly, DAZN, everyone is pushing for for Cinco de Mayo.”

Most boxing fans thought Jacobs lost to GGG. It’s unclear what Hearn is going on about. Jacobs needs to get over the loss to Golovkin, and learn from it instead of harping about how deserved the win. Next time, Jacobs needs to make sure he fights hard in the first six rounds against GGG, and that he doesn’t get knocked down again like he did in round four of their fight. It would also help Jacobs took part in the secondary weigh-in on the morning of the fight. Jacobs opted to skip that one, which left GGG weighing in alone.

In looking at social media on Sunday, there seems to be slightly more interest in a fight between Canelo and WBA Super World super middleweight champion Callum Smith (25-0, 18 KOs) than there is for a Canelo vs. Jacobs fight. That’s bad news for Hearn, but it doesn’t matter. He promotes both guys. Callum is one of Hearn’s fighters as well, but he doesn’t seem interested in making that fight for some reason. When asked about a fight between Canelo and Callum, Hearn said this to fighthub:

“Callum Smith, he’s going to be boxing in the summer. I think the guys at DAZN want a Danny Jacobs fight right now. I think that’s the natural fight.”

The boxing world wants to see Canelo fight a good opponent after the dreadful fight they witnessed last Saturday with an over-matched Rocky Fielding getting destroyed in 3 rounds on DAZN at Madison Square Garden in New York. That fight was so one-sided that it was unbearable to watch. The 6’1″ Fielding kept taking a knee in getting dropped four times, and he was making the same mistake repeatedly by standing in close and exchanging short punches with the 5’8″ Canelo.

Canelo hasn’t even made up his mind yet whether he’ll return to the middleweight division for his next fight. Hearn is getting ahead of himself by insisting that the Canelo vs. Jacobs fight get made for May 4.

Golden Boy Promotions has already booked the T-Mobile Arena in Las Vegas, Nevada for Canelo’s next fight in May. This is the same venue where Canelo was involved in controversial decisions against Gennady Golovkin. If Jacobs does get the fight against Canelo on May 4, he might need a knockout to get the win. Golovkin appeared to beat Canelo twice at the T-Mobile Area in the eyes of many boxing fans, but he ended up with nothing to show for it other than a loss and a draw.

Canelo’s next fight is VERY important, as he now arguably has to fight someone good to make up for the awful fight from last Saturday against Fielding. Canelo can’t continue to go after poor champions and mediocre contenders if he wants to bring in the subscribers on DAZN. Fans don’t want to see Canelo fighting lesser opposition. Last Saturday’s fight against Fielding was so awfully bad that it’s going to take a long time for boxing fans to erase the image from their minds of that horrible fight.

Of course, Jacobs wants the fight with Canelo. There’s no one else Jacobs can fight for a good payday at middleweight other than Canelo and Gennady Golovkin, and he’s now particularly interested in facing GGG again. Jacobs said last Saturday that if he can’t get a fight against Canelo, he’ll trickle down to the contenders in the division like Golovkin. The way that Jacobs was speaking, it almost sounded like he saw GGG as not on his level. In boxing, it really doesn’t matter if fighters like Golovkin and Floyd Mayweather Jr. hold titles. They’re naturally viewed as champions by the fans. Jacobs can pretend that he’s at a higher place than Golovkin due to him being the International Boxing Federation middleweight champion, but it doesn’t matter. The fans clearly see Golovkin as a champion, who already beat Jacobs last year.

The fights that Canelo needs to be making at middleweight are against Golovkin and Jermall Charlo. Those are the two that mean the most right now. Jacobs still needs to build himself up after his loss to GGG last year. If Jacobs could fight Jermall Charlo and beat him, then he would be a good option for Canelo, but not now. Jacobs looked awful in his last three fights against Maciej Sulecki, Luis Arias and Sergiy Derevyanchenko. The fights against Derevyanchenko and Sulecki were both narrow decisions that could have gone either way. Those were not conclusive enough victories for Jacobs to get much from them. When you barely beat your opposition the way Jacobs has, your situation isn’t solid, especially when you’re promoter is saying that “everyone” wants the Canelo-Jacobs fight.

“I think it’s just going to come down to the deal,” Hearn said. “I believe everyone knows this should be the next fight. But obviously there’s a deal to be done as well. We don’t want to be difficult, we want respect, but we want that fight.”

Golden Boy Promotions CEO Oscar De La Hoya said this week that Canelo wouldn’t be fighting Jacobs next on May 4. Either Hearn hasn’t gotten the message from De La Hoya or the Golden Boy boss has suddenly had a change of heart and now wants Jacobs as the guy. If De La Hoya did change his mind, it’s likely because of David Lemieux ending up dehydrated and having to pull out of his contest against Tureano Johnson. Before that happened, it was believed by many boxing fans that Canelo was going to fight Lemieux next. With Lemieux gone, that leaves Jacobs, and the talented Jermall Charlo as the options. Since Canelo is likely never going to voluntarily face Jermall, it means Jacobs is the guy left over. We’ve already established that Canelo can’t take another soft opponent due to his big $365 million contract with DAZN. Canelo needs to fight quality opposition. He can’t have all 11 of his fights with DAZN be against no hopers like we saw last Saturday with his mismatch against Fielding. Jacobs clearly isn’t the best middleweight or even the third best, but he holds one of the world titles at 160, and he has a pushy promoter in Hearn, who will work hard in hyping the Canelo-Jacobs fight.

It would be interesting to know if Hearn truly believes that his fighter Jacobs can beat Canelo. If Hearn does believe it, he might end up miserably sad if Jacobs fails to produce on May 4 against Canelo. It would be best for Hearn and Jacobs to go into the Canelo fight with their eyes open. They should know that with the fight taking place at his favorite venue in Las Vegas, they’re going to need a really great effort if they want to win the fight. Golovkin couldn’t do it in two tries, and he’s considered a better fighter than Jacobs. Some guys in boxing can’t be beat by decision, especially when they’re popular like Canelo. The only way to beat them is to knock them out. Canelo’s bulldog neck, and his head movement make him impossible to KO by going upstairs. Jacobs will need to throw body shots if he wants to score a knockout on May 4. Of course, we still don’t even know that Jacobs is getting the fight with Canelo. De La Hoya could pull a shocker and sign David Lemieux for the fight with Alvarez. The casual boxing fans probably won’t care, as many of them don’t know the difference between Lemieux and Jacobs. 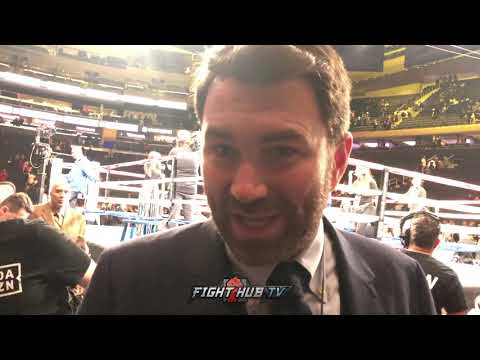 
« Jorge Linares vs. Pablo Cesar Cano on Jan.18 on DAZN

Jaime Munguia vs. Takeshi Inoue – official for Jan.26 on DAZN »