Tyson Fury: Joshua can’t move like me, Wilder would nail him 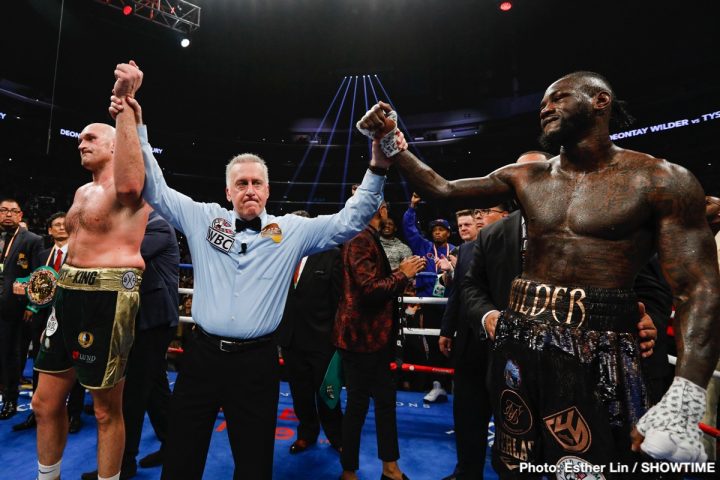 By Allan Fox: Tyson Fury has tasted Deontay Wilder’s power, and he now understands why IBF/WBA/WBO heavyweight champion Anthony Joshua has wanted no part of fighting him. Fury maintains that Joshua, who can’t move nearly as well as him, would be in the line of fire from WBC heavyweight champion Wilder’s big right hand shots, and he would end up getting tagged by him if they fought. Fury (27-0-1, 19 KOs) spent virtually the entire fight on the run last Saturday night, doing his best dance routine to get out of the way of Wilder’s howitzer right hands.

At the end of the night, Fury defensive prowess paid off, with him only getting hit twice with hard flush shots on the chin. Unfortunately for Fury, he was knocked down twice with those hard shots from Wilder in getting dropped once in the 9th and another time in the 12th. The result was the judges scored the Wilder-Fury fight a 12 round split decision at the Staples Center in Los Angeles, California. That’s not the outcome that Fury, Wilder or the boxing public wanted. The boxing fans that paid $64.99 to see the fight on Showtime pay-per-view can’t have been too happy at the result or in how the fight was conducted. It was the furthest thing you could get from an old fashioned barn-burner.

“I felt [ Deontay’s punching power],” Fury said in talking about getting hit by Wilder and dropped twice in the 9th and 12th. “No wonder AJ didn’t want no part of that right hand. He can’t move like me, he’d have been nailed.”

Joshua doesn’t move well at all, and part of the problem is he carries around too much muscle weight. If Joshua could lose 25 lbs of the muscle that he’s gained since he turned pro in 2013, he’d be a lot more mobile fighter. Joshua (22-0, 21 KOs) seems to be focused more on looking good in terms of having a bodybuilder physique at the expense of his performances inside the ring. You can argue that Joshua’s bodybuilding is a hobby that has run amok, hurting his career by making him vulnerable inside the ring by slowing him down.

Fighters have hobbies outside the ring, and sometimes those hobbies can hurt their careers. For example, fighters that love motorcycles. Sometimes they end up crashing them and ruining their careers. Joshua’s love of weight lifting is hurting his own career. It’s not as risky as riding motorcycles or hang gliding, but it’s slowing him down, making him easy to hit and vulnerable. Joshua has gotten away with having a body builder physique due to the way his promoter Eddie Hearn has been matching. He’s not put Joshua in with any of the good heavyweights like Wilder, Luis Ortiz and Fury. Once Joshua does have to face some of those guys, it should get interesting.

“I am a true bred fighting man,” Fury maintains. “Wilder came over the UK. He called out Joshua. [Joshua] got offered a lot of money, a lot of money [$50 million], money that could change countries, probably. And he turned it down.”

Joshua has taken a massive amount of heat from boxing fans for him turning down the $50 million that Wilder’s management offered him for a fight in September. Joshua turned it down, and ended up making considerably less to face his 39-year-old World Boxing Association mandatory challenger Alexander Povetkin, who he stopped in the 7th round.

“I said to Deontay, ‘I’m sorry for what’s happened to you, but if you offer me the fight I will not turn you down, I promise you. I am a fighting man, I’ll step up and represent my country,'” Fury said in talking about how he readily accepted a fight against Wilder. “And tonight I did that. It was a great opportunity. Deontay Wilder’s a good man, a good fighting man, and I respect him.”

Fury showed a lot of courage in taking the fight with Wilder, but his management wasn’t holding him back. One gets the sense that Joshua’s promoter Eddie Hearn has been an enabler for him by making it easy for him not to take the fight with Wilder by offering him flat fee offers, and rejecting the huge $50 million offer from his team.

There’s a good chance that Wilder would knockout Joshua if that fight where to get made. Wilder takes a pretty good shot, and he looks a lot more solid in the chin department than Joshua does. That’s not a knock on Joshua. It’s just reality. Since turning pro in 2013, Joshua has been hurt by the following heavyweights: Dillian Whyte, Wladimir Klitshko, Alexander Povetkin Joseph Parker and Carlos Takam. Joshua seems to be getting hurt more frequently as of late since his fight with Wladimir in 2017. This suggests that maybe Wladimir shook something loose inside his head that has made him more vulnerable to getting hurt. There’s no way of knowing if that’s true or not. What we do know is Joshua has been hurt in his last four fights starting with his match against Klitschko. Joshua getting hurt first by Wladimir, and then getting hurt in his three fights since then might be just a coincidence. Who knows? It’s just when things like that happen in sequence, it makes it appear that this was caused by something that took place the beginning of the sequence, which would be Joshua’s fight with Wladimir in 2017. Wilder is a lot more explosive than Joshua, and he’s the bigger puncher.

Joshua is easy to hit compared to Fury, which means that Wilder won’t need to go looking for him on the night. Joshua’s defense pales in comparison to Fury’s. In his last two fights, Wilder has faced two of the best heavyweights on the planet in Luis Ortiz and Fury. Those two heavyweights would give Joshua a boatload of problems if they were to fight him. Ortiz has zero chance of ever fighting Joshua while he’s still in his 30s. Fury will get the fight against Joshua obviously because there’s so much money available in that contest.