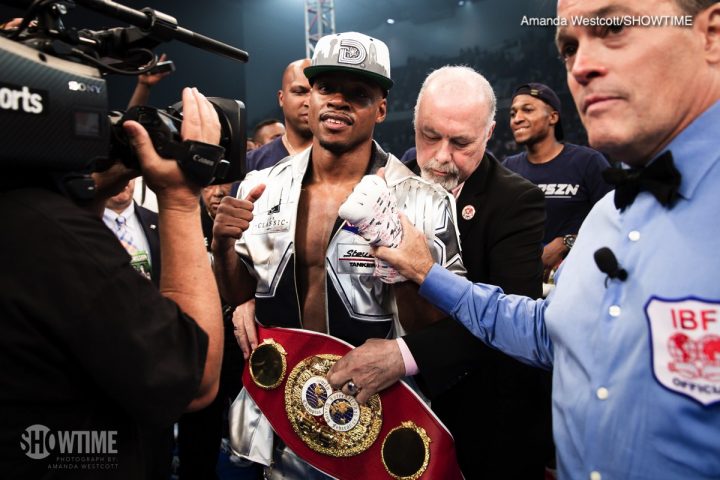 By Sean Jones: IBF welterweight champion Errol ‘The Truth’ Spence (24-0, 21 KOs) says he thinks he and Jermall Charlo (28-0, 21 KOs) will both knockout former middleweight champion Gennady Golovkin (38-1-1, 34 KOs). Spence is still fighting at 147, but he could move up to 154 in a year or two after he exhausts all the fights available to him at welterweight.

Golovkin, 36, is coming off of a second controversial fight against Saul Canelo Alvarez, and situation is uncertain right now which direction he’ll go in with his career.

If Spence is willing to move up to 160, then he should have his adviser Al Haymon setup a fight against Golovkin. It’s highly unlikely that Golovkin is going to agree to fight Spence though unless it’s a big pay-per-view match-up. Perhaps if there’s a lot of money for GGG to make, he might agree to fight Spence. After all, Golovkin fought former IBF welterweight champion Kell Brook at middleweight in 2016, and stopped in the 5th round. Golovkin fractured Brook’s left eye socket in the 2nd round with a big left hook. Brook’s career hasn’t been the same since that fight. Spence is likely just talking without any serious intent in fighting Golovkin. It would be too risky for a fight for Spence to face a puncher like GGG. It’s true that Golovkin is getting up there in age, but his punching power looks to be as good as ever. Canelo was able to dodge a lot of Golovkin’s shots with his head and upper body movement in their two fights, but he was still hurt by him twice in their rematch last September. Canelo didn’t look as sharp in his last fight with Rocky Fielding. He was getting hit by the British fighter. The slowed reflexes from Canelo might be a product of all the big shots that he was hit with by Golovkin in their second fight.

One reason for Spence’s confidence could be due to all the sparring that he’s done with Jermell Charlo. Spence obviously is able to hang with Charlo, and might even be getting the better of him during their sparring sessions. It wouldn’t be surprising to see Spence working Charlo over during the sessions. If Spence is able to dominate one or both Charlo brothers during sparring, then that could be the explanation for him thinking he can beat Golovkin now. If Spence is getting the better of Jermall as well during the sparring sessions, then that’s another reason why he thinks he can beat Golovkin. As Spence said, “He’s [Jermall] clipping GGG.” That means Spence thinks Charlo will beat Golovkin too. None of this matters though if Spence’s adviser Al Haymon doesn’t give him the green light to fight GGG, which is likely going to be the case. There are too many interesting and winnable fights for Spence at 147 against Keith ‘One Time’ Thurman, Shawn Porter, Danny Garcia and Terence Crawford. Why would Spence move up to 160 and risk being knocked out by a puncher like Golovkin? Spence would face the same kind of threat if he took on a powerful middleweight like David Lemieux. One punch from Lemieux and it could be game over for Spence. It would be the same situation if Golovkin fights Spence. One big shot, and it’s over.

As far as Jermall Charlo goes, he couldn’t knockout Matt Korobov and Austin Trout. If Jermall couldn’t knock those guys out, then it’s ridiculous to assume that he’s to KO Golovkin.

“I just thought Jermell edged it out, but it happens,” Spence said. “They [Tony Harrison] say they’re going to give him a rematch, so I’m hoping they fight again.”

Jermell Charlo (31-1, 15 KOs) had his WBC junior middleweight title reign and his unbeaten streak end in losing to contender Tony Harrison (28-2, 21 KOs) by a 12 round unanimous decision.

“I think so,” Spence said when asked if he thinks Jermall performed poorly against Matt Korobov due to him seeing his brother Jermell Charlo lose to Tony Harrison in the co-feature bout. “Jermall was lunging in. He was really tight. He wasn’t just letting his hands go like he usually does, and you just kind of tell. He was kind of off a little bit. That’s his twin brother [Jermell that lost]. His twin brother lost, and you’ve got to fight after that. It hurts,” Spence said.

Jermall might have been thinking too much about his brother’s loss to Harrison rather than focusing on Korobov when he entered the right him. That’s still no excuse for why Jermall looked so bad. He should have been able to shake off the nerves after the first few rounds to focus on his business against Korobov, but he never did. Charlo was never comfortable with Korobov until the last round, and that was only because the Russian fighter came out swinging.

Spence clearly has a different spin on the Charlo vs. Harrison fight than the judges and many boxing fans have of it. Charlo was out-boxed by Harrison over 12 rounds. It was Charlo’s mistake to spend to much time looking for a knockout. Charlo didn’t adapt to what Harrison was doing, and it cost him the fight.

“The dude [Matt Korobov] had something like over 300 amateur fights, so he’s got a huge background,” Spence said. “The dude [Korobov] was real crafty. He was tricky and slick with his straight left. A lot of right-handers can’t get away from a left hand. He had a sneaky style,” Spence said of Korobov.

Charlo, 28, didn’t know what he was getting himself into when he agreed to fight Korobov on one week’s notice after his opponent Willie Monroe Jr. tested positive for a banned substance and had to be pulled from the card. Korobov was a huge upgrade over Monroe. Even though Korobov hasn’t done much with his career, he was seen a as future world champion when he first turned pro in 2008 after competing in the Olympics. Korobov was brought along too slowly by his management, and he never took full advantage of his talent until now. It’s unfortunate for Korobov that he didn’t get the nod in a fight that many boxing fans felt he deserved to win last Saturday night against Charlo. Korobov lost the fight, but won the event. He walks away from the Charlo fight being viewed as the winner by the boxing public, and that counts as much as a victory. It’s Charlo comes out of the fight with his credibility in tatters.