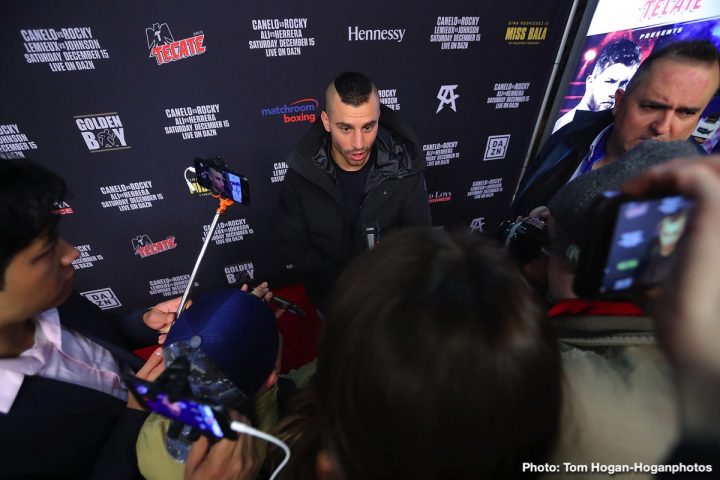 By Jeff Aranow: The promoter for former IBF middleweight champion David Lemieux, Camille Estephan, believes a fight between him and Golden Boy Promotions flagship fighter Saul Canelo Alvarez is possible for 2019 at super middleweight, according to writer Michael Woods of badlefthook.com. Estephan co-promotes the 30-year-old Lemieux, and he thinks a fight between him and Canelo can still happen in 2019.

Golden Boy Promotions haven’t given any ideas of who Canelo will be fighting in his next fight on May 4. The only guy the boxing fans seem remotely interested in seeing Canelo fight is Gennady Golovkin. Daniel Jacobs’ promoter Eddie Hearn has been saying that DAZN wants Canelo to fight Jacobs, but we don’t know if that’s the case or not. Lemieux would be a decent opponent if Canelo doesn’t want to face Jacobs or take care of his World Boxing Council mandatory challenger Jermall Charlo (28-0, 21 KOs). Canelo vs. Lemieux might be able to bring in some subcribers for DAZN. It’s an easy fight to make in comparison to the Canelo-GGG 3 and Canelo vs. Charlo fights. Charlo fights on Premier Boxing Champions on FOX & SHOWTIME. Putting a fight together with him might prove to be difficult.

Lemieux recently was hospitalized for dehydration earlier this month while trying to make the 160 pound weight limit for his fight against Tureano Johnson on the undercard of the Canelo vs. Rocky Fielding fight on DAZN at Madison Square Garden in New York. Unfortunately for Lemieux (40-4, 34 KOs), his hospitalization for dehydration prevented him from taking the fight with the 34-year-old Johnson. That fight was supposed to put Lemieux in the running to face Canelo on May 4 on Cinco de Mayo at the T-Mobile Arena in Las Vegas, Nevada.

Golden Boy co-promotes Lemieux, so it’s a natural fight for them to want to make. Estephan still believes the Canelo vs. Lemieux fight can take place, as long as it happens at 168. Canelo proved in his fight against former World Boxing Association ‘regular’ super middleweight champion Rocky Fielding on December 15 that he’s just as talented at 168 as he is at 160. Moving up in weight to super middleweight isn’t an issue for Canelo. The only question is does Canelo want the fight with Lemieux or does he prefer to move back down to 160 in order to fight the likes of IBF middleweight champion Daniel Jacobs in a unification fight?

If Golden Boy Promotions wants Canelo to have an advantage over a weakened Lemieux, they can insist that the fight between them take place at 160. It would be a similar situation where Golden Boy setup a fight between Canelo Alvarez and super middleweight Julio Cesar Chavez Jr. in May 2017. It was a catch-weight fight at 164.5 pounds. In his recent fights before that, Chavez Jr. had been struggling badly just to make 168. Requiring that Chavez Jr. get down to 164.5 to fight Canelo was just asking for trouble.

If the idea was to make sure that Chavez Jr. was weakened enough for Canelo to win an easy fight, then Golden Boy accomplished their goal in having the fight conducted at a catch-weight instead of the full weight for the super middleweight division. However, if that was the idea behind the catch-weight, then it backfired on Golden Boy, as Chavez Jr. was so weak that he looked sickly for the fight. Canelo ended up dominating a drained looking Chavez Jr. on HBO PPV, and the boxing fans that paid to see the dull fight were furious at getting little value for their money. For Golden Boy and Canelo’s sake, they need to make make sure that Lemieux isn’t as drained as Chavez Jr. was for his fight with Alvarez. The focus should be on making sure Canelo’s fights are as fan-friendly as possible so that his popularity can continue to increase. Unfortunately for Canelo, his fights against Chavez Jr. and Rocky Fielding looked like bad mismatches against weak opposition. Fielding fought like he had no skills at all. For a world champion, Fielding was an embarrassment. He reflected badly on the super middleweight division.

It would be risky for Canelo to schedule a fight against Lemieux at 160, as he might not be able to make weight for the fight. As long as Canelo is flexible with the weight, a fight between him and Lemieux can still happen even if the Canadian fails to make weight. Ideally though, Canelo vs. Lemieux should take place at the full weight for the super middleweight division at 168. Lemieux is too big for middleweight at this point in his career, and the last thing that he needs is to be hospitalized again trying to make weight. Lemieux should be able to make 168. Even that weight might not be easy for him, as he looks like he walks around in the 180s to low 190s. If Lemieux struggles even to make 168, then it’s hard to see him having much time left as a top level pro. At 5’9″, Lemieux is too short to fight at light heavyweight. Those guys would give Lemieux all kinds of problems with their size.

Manny Pacquiao vs. Adrien Broner chronicled on SHOWTIME ALL ACCESS »