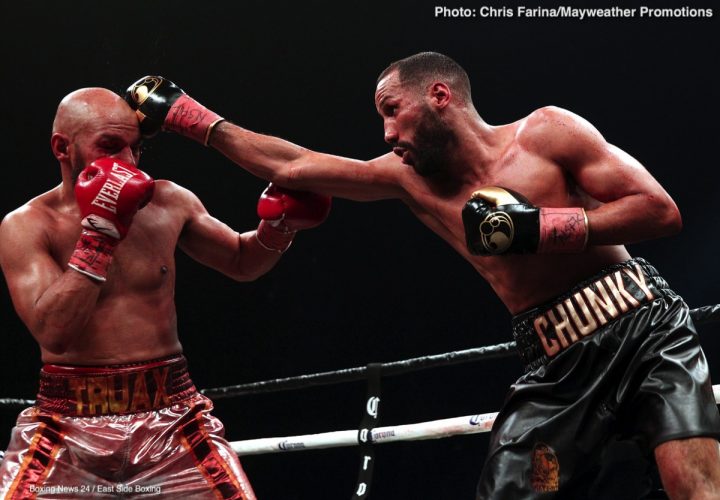 By Trevor McIntyre: Promoter Eddie Hearn says he thinks a fight between former IBF super middleweight champion and IBO 168 pound champion Chris Eubank Jr. (27-2, 21 KOs) is possible for February 23 on ITV Box office pay-per-view, according to IFL TV. Although fighters have had had some hard luck recently in their respective careers, it’s still an intriguing fight on paper.

Eubank Jr. vs. DeGale would be a good fight for a shopping centre. At the level that both fighters are at right now, it’s not a match that one would expect a huge audience coming out to see them. DeGale looks utterly shot to pieces from his fight with Badou Jack last year, and he was quite fortunate not to be given a loss to Caleb Truax in their rematch last April. It goes without saying that DeGale looked dreadful in that fight, doing little more than holding and running for 12 rounds. DeGale clearly lost his first to Truax by a 12 round majority decision in December of 2017. One judge scored it a draw. At best, DeGale deserved to win one round.

As long as the 32-year-old DeGale (25-2-1, 15 KOs) looks as impressive as he did in his recent third round knockout win over Fidel Monterrosa Munoz last September, we should have an interesting fight on February 23.

The timing for putting DeGale vs. Eubank Jr. on ITV Box Office pay-per-view isn’t a particularly good one right now. DeGale has arguably been beaten in two out of his last three fights since 2017, and the 29-year-old Eubank Jr. was recently trounced by George Groves by a lopsided 12 round unanimous decision last February in the final of the World Boxing Super Series tournament in Manchester, England. Eubank Jr. did bounce back nicely in winning his last fight against domestic level fighter JJ McDonagh (16-5, 8 KOs) by a 3rd round stoppage on September 28.

Up until recently, Eubank Jr. had a tremendous amount of buzz about his pro career after beating Avni Yildirim, Arthur Abraham, Renold Quinlan, Tom Doran, Nick Blackwell, Gary O’Sullivan, Dmitrii Chudinov and Gary Jeter. Eubank’s loss to Groves has really taken the wind out of his sails in terms of his popularity with boxing fans, as he was exposed as an extremely raw fighter by Saint George in that fight. Eubank Jr. has fought only once since then against 2nd tier fighter McDonagh, and he wasn’t a good enough fighter to show whether there’s been any improvement in his game.

With as many holes that Eubank Jr. showed in his game against Groves, it’s not likely that he’s going to make a lot of progress in his boxing skills. Eubank Jr. needs a good trainer, and he has to start from ground up if he wants to develop the skills to compete with the big dogs at 168. At 29, Eubank Jr. is a little long in the tooth for him to be developing his game. Usually fighters develop their skills in their teens and early 20s, not when they’re pushing 30-years-old like Eubank Jr.