Manny Pacquiao vs. Adrien Broner chronicled on SHOWTIME ALL ACCESS 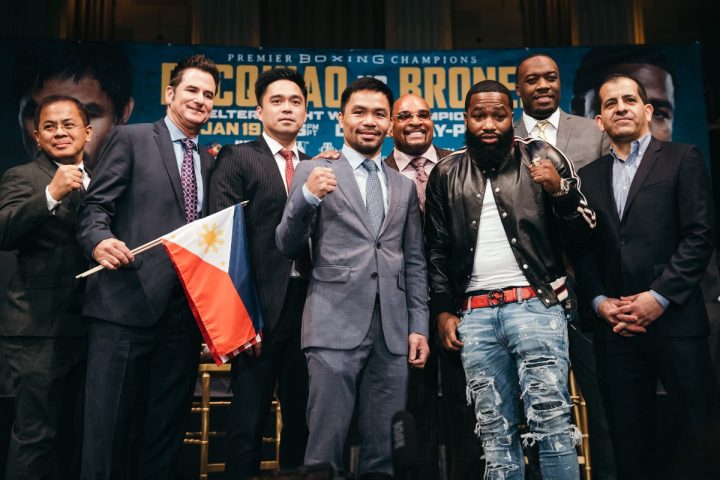 By Chris Williams: SHOWTIME will be televising a three-episode ALL Access series to help create interest in the January 19 fight between WBA secondary welterweight champion Manny Pacquiao and fading former four division Thus far, the Pacquiao-Broner fight hasn’t yet created a firestorm of interest from the U.S fans. It’s still early though, so its possible that as the fight draws nearer more fans will get excited about it. Things obviously could be better for Broner’s career. He’s at a low point right now.

For boxing fans interested in the Pacquiao-Broner fight, the first part of SHOWTIME’s 3-part series will be televised on January 4. The start time is at 10:30 p.m. ET / 7:30 p.m. PT. The next episode will on January 11 followed by the final episode on January 18.

Trainer Freddie Roach took a shot at Broner over his recent arrest for a failure to appear for a court case in South Florida before Christmas.

“Sounds like Adrien should change his ring name from ‘The Problem’ to ‘The Fugitive.’ This may be the first time I face a corner that includes a bail bondsman,” Roach said to ESPN.com.

Hopefully, Broner makes it to the ring on January 19 without being tripped up with legal problems. It would cripple the SHOWTIME PPV card if Broner can’t make it to the ring due to legal issues. Pacquiao would need a replacement in a hurry, and there just aren’t too many beatable guys like Broner that can be put his his place. Pacquiao likely wouldn’t be eager to fight a good welterweight on short notice like Danny Garcia, Egidijus Kavaliauskas or Josh Kelly. Pacquiao is a good fighter, but he’s not unbeatable, as we saw in his losses to Jeff Horn and Floyd Mayweather Jr. Having a vulnerable fighter like Broner is perfect for Pacquiao, but replacing him won’t be easy on short notice if he’s unable to fight for any reason.

Broner comes into this fight with an 0-1-1 record in his last two fights. If you look at Broner’s last three fights, he could easily be 0-3. A lot of boxing fans thought Broner should have been given a loss to Jessie Vargas in his last fight in April. Broner was beaten before that by Mikey Garcia in July 2017. In his fight in early 2017, Broner defeated Adrian Granados by a controversial 10 round decision.

Broner is still a popular fighter despite him no longer being capable of beating top level world class opposition. Broner talks a good game, and he’s able to get the casual and boxing fans interested in his fights due to his trash talking rather than his talent inside the ring. The problem is that the fans are only going to keep tuning in for so long before they give up on Broner if he fails to start winning again, which would seem to be impossible at this point.

Broner is not a good welterweight, and he lacks the talent to be a good fighter at light welterweight as well. Broner needs a win in the worst way over Pacquiao to try and reinvent his sinking career. That’s unlikely to happen though. Broner is looking so faded at this point in his. He would be lucky to beat some of the contenders in the division. What Broner needs to do is move back down to super featherweight where he was a good fighter. He’s not about to do that though. Broner can’t take the weight off. If he could, he would have likely moved back down to super featherweight ages ago so that he could fine success.

Pacquiao vs. Broner is the headline fight on SHOWTIME’s pay-per-view card on January 19 at the MGM Grand in Las Vegas, Nevada. Former two division world champion Badou Jack vs. Marcus Browne is the chief support with their 12 round fight at light heavyweight.

NEWS:   Broner upset with Farhood's 114-113 score, having him lose to Santiago

The public will get a chance to see Pacquiao (60-7-2, 39 KOs) training with his long time trainer Freddie Roach along with his helper Buboy Fernandez, who recently was promoted to full trainer. It’s going to be interesting to see how Roach and Buboy work together in training Pacquiao. Will Buboy let Roach do most of the training or will he insist that he be the guy that takes Pacquiao through his paces? Pacquiao did a good job with Buboy in his corner for his last fight against Lucas Matthysse on July 15 at in Kuala Lumpur, Malaysia. Pacquiao stopped Matthysse in the 7th round, and looked better than he had in many years. How much of that was due to Buboy is the big unknown. Pacquiao hadn’t fought an aging slugger for many years before his fight with Matthysse. That might explain why he hadn’t been looking so great in the last five years of his career.

Matthysse, 36, was made to order for Pacquiao. Roach used to do most of the talking in the past during Pacquiao’s HBO 24/7 episodes back when he was a huge PPV star. Things have changed a lot in the last three years for the Filipino star. He’s not as popular as he once was, and is no longer with Top Rank boxing. Although Pacquiao is still a popular fighter, he’s not the huge PPV attraction that he once was. If he was, his fight with Broner would likely pull in over 1 million PPV buys. That’s a dream number nowadays. Pacquiao vs. Broner is not expected to bring in more than 300,000 buys at best, but you never know. Perhaps the casual boxing fans will suddenly show interest in seeing the fight and will be willing to order it in high numbers like in the olden days.

The last time Pacquiao fought in the U.S, he defeated Jessie Vargas by a 12 round unanimous decision over two years ago in November 2016 in Las Vegas, Nevada. It wasn’t an impressive performance by Pacquiao, who won looked tentative in beating Vargas by the scores 118-109, 118-109 and 114-113.

In terms of entertainment, Broner might be the more interesting of the two fighters for the sake of SHOWTIME’ ALL ACCESS episodes. Broner will get a chance to showoff his personality to the millions of casual boxing fans that will tune in to watch parts of the episodes. Broner’s once promising career is on a downward spiral as late, with him struggling to pick up wins even against fringe level fighters. Broner has lost three fights so far in his 10 year pro career. After January 19, he’ll likely have his fourth defeat against Pacquiao. Broner could have an additional three losses on his career from his fights against Daniel Ponce Deleon, Adrian Granados and Paulie Malignaggi. Broner’s popularity probably saved him from losses in those fights. He performed poorly in each of them. Broner cannot afford to be listless against Pacquiao and expect the judges to give him a controversial decision. It doesn’t work like that when you fight a guy with Pacquiao’s fire power. He has the kind of punching power that enables him to take the judges out of the equation entirely. If Broner doesn’t discover the Fountain of Youth by the time he faces Pacquiao on January 19, he’s going to lose big to him.

Aside from the Badou Jack vs. Marcus Browne fight, the Pacquiao-Broner undercard is barren of interesting fights unfortunately. The hardcore boxing fans might be interested in some of the fights, but there aren’t any notable high profile fighters on the undercard other than Jack, who is coming off of a 12 round draw against former WBC light heavyweight champion Adonis Stevenson earlier this year.

In other fights on the card, Rau’shee Warren will be fighting Nordine Oubaali for the vacant World Boxing Council World Bantamweight Title. Interim WBA World featherweight champion Jhack Tepora will be defending against Hugo Ruiz. The card could really use a couple of big names to help create interest. Keith Thurman, Danny Garcia, Errol Spence Jr. and Shawn Porter would help drive interest in the Pacquiao vs. Broner PPV card if one or two of them were included.