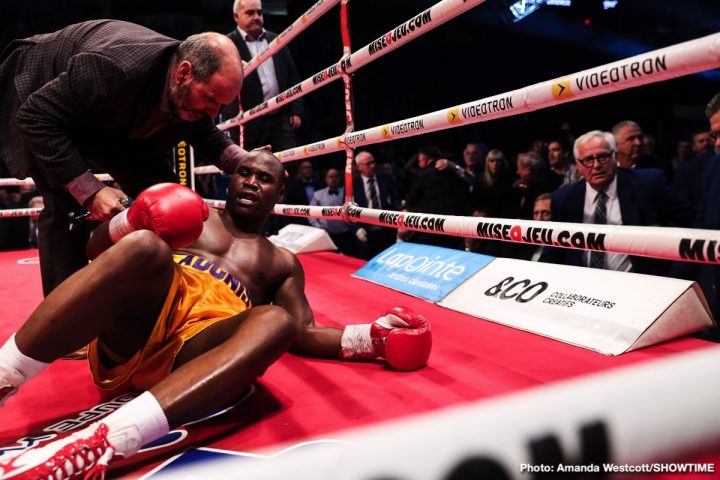 By Jim Dower: Adonis Stevenson is currently in critical condition following his 11th round knockout loss last Saturday night to challenger Oleksander Gvozdyk at the Videotron Center in Quebec City, according to his promoter Yvon Michel. Stevenson, 41, lost his World Boxing Council light heavyweight title in the 11th round when Gvozdyk hurt him with a big right hand shot, and then poured it on with a number of powerful combinations until ‘Superman’ Adonis hit the deck.

Although the fight was stopped immediately by referee Michael Alexander, Stevenson (29-2-1, 24 KOs) was still badly hurt from the knockout.

There’s no word yet about the nature of the injury that Stevenson suffered in the Gvozdyk fight. Stevenson was immediately rushed to the hospital after the fight. Stevenson suffered a devastating knockout in the 11th round after taking a four-punch combination to the head that dropped him hard. In the last seconds of the 10th round, Gvozdyk hurt Stevenson with a five-punch combination to end the round. The way that Stevenson looked in taking those blows, it was obvious that he was going to have a hard time recovering in between rounds. Earlier in the 10th, Stevenson had hurt Gvozdyk with a jarring left hand to the head that knocked him to the ropes. The ropes kept Gvozdyk from hitting the deck. Gvozdyk recovered from the blow by holding onto Stevenson. However, Stevenson unloaded with everything he could to try and finish the hurt Gvozdyk, but he failed to do so. By the end of the 10th, Stevenson was gassed out and almost defenseless when Gvozdyk started teeing off on him with heavy combinations.

Stevenson’s fight with Gvozdyk was a mandatory defense of his World Boxing Council 175 lb title. The timing of the defense against Gvozdyk was a bad one for Stevenson, as he was coming off of a grueling 12 round draw in his fight before that against former two division world champion Badou Jack on May 19. It had been less than seven months since the Jack fight when Stevenson had to get back in the ring to defend against Gvozdyk.

In some ways, the Jack fight was a lot tougher contest for Stevenson despite him getting out of the bout with a 12 round draw. Stevenson appeared to take a lot more punishment in the Jack fight than he did last night against Gvozdyk. Stevenson didn’t get hit a lot by Gvozdyk until the final seconds of the 10th, and in the 11th. Stevenson was getting hit really hard by the 6’2” Gvozdyk, who is one of the biggest punchers in the 175 lb division. There are arguably stronger punchers than Gvozdyk at light heavyweight, but Stevenson wasn’t in the position to handle his punching power last night when he suddenly turned it on in the 10th and 11th rounds.

Here’s what Stevenson’s promoter Yvon Michel has to say about his condition as of Sunday:

”NOTICE, news about the condition of Adonis
The family of @ AdonisSuperman and the leaders of Groupe Yvon Michel are currently with Adonis Stevenson. They wish to inform friends and supporters that Adonis is currently in critical condition. They appreciate the concern and support of all. There will be no further comments at this time and they respectfully request your understanding in their desire have their privacy.”

Boxing News 24 are hoping Stevenson can recover from his injuries, and continue his life. He put up a great effort last night before losing the fight against the young unbeaten 31-year-old Gvozdyk.

Gvozdyk did little in many of the rounds, and he allowed Stevenson to outwork him with his forward pressure. Gvozdyk gave ground to the Canadian based Stevenson through the first 10 rounds of the fight. It was only in the 11th that Gvozdyk stopped moving backwards, and took the fight to the tired and hurt Stevenson. In the 3rd round, Gvozdyk caught Stevenson with perfect right to the head that knocked him down, but the referee Michael Griffin ruled it as a slip. Stevenson was hurt from the knockdown, as he backed off and and then grabbed Gvozdyk to hold on. The fight from that point on was mostly a cat and mouse type of affair with Stevenson pressuring an elusive Gvozdyk, and having little luck most of the time.

The judges had Stevenson ahead 98-92, 96-94 and 95-95 at the time of the knockout in the 11th. The judges weren’t robbing Gvozdyk. They were just acknowledging that Stevenson was the one coming forward most of the fight, landing the hard body and head shots and looking like he wanted to engage. Gvozdyk looked like he was waiting for the right moment to go on the attack against the fading Stevenson. That moment for Gvozdyk came late in the 10th, and in the 11th. Gvozdyk was able to take advantage of the tired Stevenson late in the fight to get the victory.

In the 11th round, Gvozdyk (16-0, 13 KO) went at Stevenson, hitting him with two solid shots that hurt him, causing him to back up to the ropes. Now badly hurt, Stevenson attempted to land a desperate left hand uppercut, but missed badly. Gvozdyk then reeled off eight consecutive shots to the head of Stevenson with all of them punches landing hard. Stevenson, 41, then went down from the effects of the powerful shots from Gvozdyk. Stevenson’s back was against the ropes while he was down. He tried to get back to his feet, but fell back down on the canvas. In the meantime, referee Michael Griffin had stopped the contest without bothering to look back at the badly hurt Stevenson. Griffin knew that Stevenson was badly hurt from watching him go down, and he wasn’t going to be able to continue with the way he was dropped by Gvozdyk. The time of the stoppage was at 2:49 of round 11.

Moments after the fight, Stevenson looked like he was okay. However, he reportedly began to have problems shortly after that.

It’s unclear now whether Stevenson will ever box again. He’s in critical condition and his career is health is obviously the paramount concern.

The loss for Stevenson ended his five-year reign as the WBC light heavyweight title. Going into the Gvozdyk fight, Stevenson had held the WBC title since June 8, 2013, making him the longest reigning world champion in boxing.