Canelo Alvarez to move back down to 160 after Fielding fight 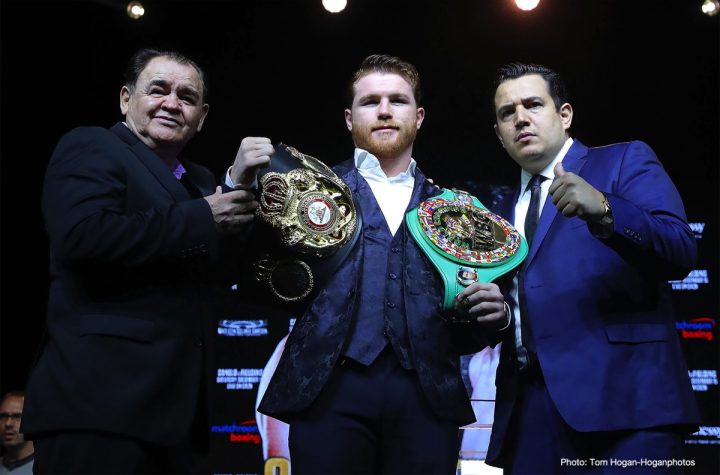 By Jeff Aranow: Saul Canelo Alvarez will be moving back down to 160 after his fight next month against Rocky Fielding. Canelo (50-1-2, 34 KOs) says he’s at his best when he’s fighting at 160, although we can’t know whether that’s true or not because he still hasn’t fought at super middleweight yet.

Canelo may change his mind if he looks stronger at 168 due to him not having to dehydrate so much to make weight for the division like he’s currently doing at 160. Canelo is believed to fight in the 180s after rehydrating, and that takes a toll on his body in needing to cut a lot of weight to get down to 160.

“Right now the goal, the objective, is to fight for this world title and win on December 15 and then go back to 160 points where I do best,” Canelo said. If we’ll be moving up and down those divisions, we didn’t know, but right now our goal is to get the title to middleweight.”

Canelo, 28, has only fought twice at middleweight at the full weight for the division without catchweights, and both of those fights were against Gennady Golovkin. Since the boxing world has concluded that Canelo was saved from 2 losses due to the judging by the Nevada judges for both GGG fights, it’s difficult to say that Alvarez is at his best at middleweight. With a different crew of judges for the two fights with GGG, Canelo could be 0-2, and looking in bad shape right now. Canelo’s best weight obviously isn’t middleweight. It’s junior middleweight. That’s where he looked his best.

Canelo did have five catchweight fights at middleweight against the following fighters:

As you can see, Canelo kind of went overboard once he started fighting at catchweights after

“It doesn’t worry me, the height difference,” Canelo said about his much taller opponent Fielding. “We are working toward that. We will be working to get into it to guard, so it doesn’t worry to me at all. I’m a fighter who can adapt, and that’s what I’ll be doing when I fight him.”

Canelo says he’s not worried about the height difference against Fielding now, but he may change his mind when he gets inside the ring with him on December 15 and finds out the hard way how hard it is to deal with the size and power of the British fighter. Fielding is a very big guy with a lot of power in both hands. When he turns his offense on full blast, he’s hard to reckon with. Canelo likes to move his head a lot to make head hunters like Gennady Golovkin miss, but Fielding likes to throw body shots. That’s an area where Canelo isn’t nearly as good at defending against. Canelo does like to hit his opponents with his left hand counter when they attack his body. Here’s the thing. If Canelo’s counter punches don’t have any effect on Fielding, then he’s going to be forced to take his formidable shots, and he’s a very good body puncher. In some ways, Fielding is more dangerous than GGG due to his love for body punching. Golovkin doesn’t like to throw body punches. Fielding is a completely different animal. He likes to stand in close and unload with hooks to the body. With Fielding’s frame, he’s able to get a lot of torque on his shots to do damage.

Nonito Donaire vs. Zolani Tete won’t be taking place in the Philippines

WBA Super World bantamweight champion Nonito Donaire (39-5, 25 KOs) and WBO champ Zolani Tete (28-3 21 KOs) will be facing each other in the semifinals of the World Boxing Super Series bantamweight tournament in February or March of 2019 at a still to be determined venue.

There was talk recently that Donaire vs. Tete could take place in the Philippines. However, that’s not going to happen according to ESPN. Ringstar promoter Richard Schaefer had been hoping to put the Donaire-Tete in Manila in the Philippines, and wanted to call it the “Thrilla i the Manila II,” per Dan Rafael of ESPN.

The “Thrilla in Manila” was an exciting fight between Muhammad Ali and Joe Frazier. “I would have loved to put the fight in Manila but there is just no money there and the TV doesn’t really pay anything,” Schaefer told ESPN.com. “I’m looking at venues here in the U.S.” It’s still not a done deal that the Donaire vs. Tete fight will take place in the United States.

It’s possible the fight could take place in the UK. That’s where Tete is from. Schaefer is going to work a deal with Tete’s promoter Frank Warren to decide where to put the fight. Donaire showed in his 4th round stoppage win over Ryan Burnett earlier this month on November 3 that he win on the road, as that fight took place in Glasgow, Scotland. Donaire, 36, went into Glasgow and stopped Burnett in front of his own Scottish boxing fans. The official reason for the stoppage was Burnett suffering a back injury in the 4th round that caused him to take a knee. It was pretty clear that Donaire was too strong for Burnett from the earliest moments of the fight. Burnett was constantly backing up against the ropes and taking huge punishment. If the pattern of the fight had continued in this way, Burnett would have been stopped. Tete is going to be a tough fight for Donaire, for the reason that he’s a very big puncher and he’s big at 5’8″.

Top Rank has signed welterweight Chris Van Heerden (26-2-1, 12 KOs) to a promotional contract. The South African Van Heerden hasn’t been all that active in the last three years since being knocked out in the 8th round in September 2015. The positive news about Top Rank signing the 31-year-old is he’s won his last three fights in beating Timo Schwarzkopf, Sacky Shikukutu and Steve Claggett. Van Heerden has always been a good fighter. He just didn’t have the power, size or the defensive skills to hang with a talented fighter like Spence.

It’s unclear when Top Rank will have Van Heerden fighting, and who he’ll be going up against when he does fight. Top Rank signing Van Heerden likely means that he’ll be matched against World Boxing Organization welterweight champion Terence Crawford and/or Egidijus Kavaliauskas. Van Heerden could even wind up facing Mike Alvarado, one of Top Rank’s old timers at welterweight.

Top Rank has kept Alvarado around all these years, but he’s not been in a significant fight since 2015, when he lost to Brandon Rios by a 3rd round knockout in their trilogy fight. If Van Heerden looks good in winning a handful of fights, he could end up fighting Crawford for his WBO title. You never know. Top Rank might even move Van Heerden into a title shot against Crawford sooner than anyone would expect. Crawford is going to be defending his belt next against 37-year-old Luis Collazo, who has done nothing to rate a title shot. Collazo has almost been as inactive as Van Heerden and yet he’s fighting to be fighting for a title.