Tony Bellew: I’m NOT fighting Oleksandr Usyk for the Money 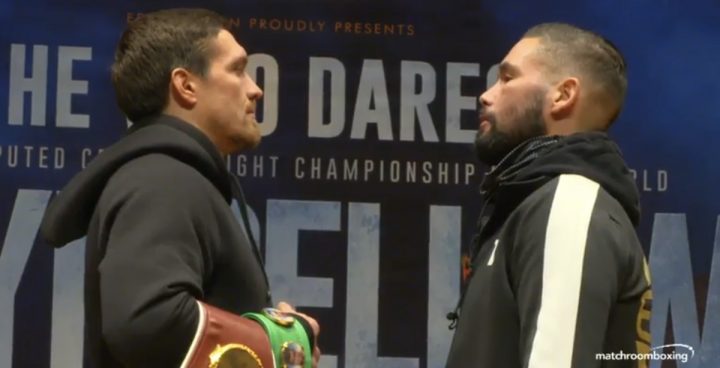 By Scott Gilfoid: Tony Bellew and Oleksandr Usyk met for their final press conference on Thursday ahead of their Sky Box Office PPV fight this Saturday night at the Manchester Arena in Manchester, England.

Despite the belief by many boxing fans that Bellew is just cashing out for a retirement payday to cushion him in his golden years, he says he didn’t take the fight with the unbeaten talent Usyk (15-0, 11 KOs) for the money. Bellew (30-2-1, 20 KOs) says he wanted to test himself against the best to see if he can defeat the 2012 Olympic gold medalist Usyk.

“This is not about money, if I wanted to money I could have created drama with someone like Dillian Whyte,” Bellew said at the final press conference on Thursday. “The superstar [Usyk] is here, I am here and all the belts are here. He’s going to learn to lose on Saturday night.”

Obviously losing to Usyk looks far better on Bellew’s resume than getting beaten by a non-champion like heavyweight Dillian Whyte. Usyk, 31, is a pound-for-pound fighter and #1 at cruiserweight; whereas with Whyte, he’s just a slapper, who has has a knockout loss to Anthony Joshua and a controversial win over former WBO heavyweight champion Joseph Parker on his resume. There’s a world of difference in Bellew losing to a limited fighter like Whyte and a talent like Usyk. Looks a heck of a lot better losing to Usyk than it would be for Bellew to get trounced by Whyte. Bellew would have a ready-made excuse if he gets beaten by Usyk to tell his loyal boxing fans. He can just say he lost to the best at cruiserweight, and that he was always considered the underdog.

Bellew’s legacy in the sport of boxing is him winning the vacant WBC cruiserweight title against Illunga Makabu, and then giving up the belt after he was about to be forced to defend it against the highly talented Mairis Briedis. Bellew moved up to heavyweight to beat the depleted 38-year-old David Haye twice rather than a younger, healthier, more active heavyweight. Even an older heavyweight like Luis ‘King Kong’ Ortiz would have been a far better choice for Bellew to fight than Haye, who left his prime behind 10 years ago. Since Bellew is saying is his last fight of his career, his only real chance of establishing any kind of true legacy is if he beats Usyk. If Bellew fails like most boxing fans expect him to, then he won’t have a legacy. He’ll just be seen as someone that picked up the vacant WBC title against a guy that didn’t arguably deserve to be ranked #1 in the first place by the WBC in Makabu in 2016. When Bellew was supposed to defend his WBC title against his #1 contender Mairis Briedis in his first and only defense, he chose to defend it against #14 ranked BJ Flores in what was viewed as a clear swerve of the talented Latvian fighter. Bellew’s wily promoter Eddie Hearn justified the selection of BJ Flores by saying that he was friends with David Haye, so there’s bad blood and a rivalry. The knowledgeable boxing fans saw it differently. They viewed it as a case of Hearn not wanting to put Bellew in with a talented cruiserweight in Briedis, who likely would have knocked him out cold and ruined any chances for money fights against Haye and now Usyk. It’s pretty simple to conclude that Hearn had Bellew swerve the fight with Briedis in order to put him in with an old, vulnerable fighter in BJ Flores. As such, there’s really no legacy for Bellew unless he beats Usyk on Saturday night, which is extremely unlikely.

It’s too bad that the Usyk vs. Bellew fight won’t be a trash talking clash on Saturday night, because Tony would win hands down. It would be a massacre. Bellew has proven all throughout the promotion that he’s the kind of trash talk. While Usyk has conducted himself with class and dignity that one would see in the upper crust of society, Bellew has gone primitive, taking it to the mud and coming across as angry, bitter and disgruntled. What’s unclear is whether Bellew is upset at Usyk for the fans overlooking him, dismissing his chances of winning at all, and generally viewing him as the next token lamb for the Ukrainian talent to slaughter on November 10. In analyzing Bellew’s primitive behavior that he’s shown throughout the build up to the Usyk fight, it appears that he’s been trying to intimidate the Olympic talent to gain an edge against him. In other words, if Bellew can scare Usyk enough, he might fight with fear on Saturday night and be less than 100 percent. Intimidation that bullies use to cower their sometimes superior opposition. If that’s the game Bellew is playing, it’s unlikely to work. Usyk has been beating fighters than Bellew for years, and he’s not going to be frightened into fighting less than his best by a menacing stare or by mean words meant to frighten him. That’s just not going to work for someone who has come from Usyk’s background. He wasn’t born with a silver spoon in his mouth.

“He understands English better than he is letting on, there’s no mind games, this is a test of wills. How much does he want it?” Bellew said. “We will find out how good I really am. Usyk has won everything and he is planning his move to the heavyweight division. I will get to him, break his heart and get through the crazy puzzle. I have the answers. This is the end and I am going out with a bang,” Bellew said.

Bellew, 35, didn’t say why he hasn’t been fighting the best since his loss to Adonis Stevenson in 2013. Bellew has fought one decent but far from good cruiserweight in Illunga Makabu since moving up to the weight division in 2014, and the rest of the guys he’s fought in that weight class were mediocre fighters. Makabu isn’t even a good fighter when you compare him to the cream of the division like Mairis Briedis, Yunier Dorticos, Murat Gassiev, Denis Lebedev, Krzystof Glowacki, Maxium Vlasov, Andrew Tabiti Beibut Shumenov. The only fights that Bellew has to show for himself at cruiserweight against fighters that hardcore boxing fans have heard if is his fights against Makabu, Flores and Mateusz Masternak. Those are what you would call fringe level fighters, not top grade talents.

“I did think I was the best cruiserweight in the world when I left the division. Usyk became the one face of the division,” Bellew said. “It’s all at stake and when he had all those belts around his waist I was the first name out of his mouth. I’m living the dream and I thought this was an impossible dream. I’m gonna steal his hardware,” Bellew said.

There’s no way that Bellew was the best cruiserweight at the time that he left the division in 2016. Bellew was just one of many cruiserweights in the division, but he was just some guy that Hearn got ranked high with the WBC based on matching him against weaker opposition, and then setting up a fight against a flawed fighter in Makabu for the vacant WBC cruiserweight title. When Bellew left the cruiserweight division, he was arguably the #8 best fighter in the weight class. Here are the talented fighters that one could say were superior to Bellew at the time that he chose not to defend his belt against Briedis:

Bellew was among the best at the time that he left the cruiserweight division, but not the best. The above list of fighters were considered to be much better fighters than Bellew in the eyes of a lot of boxing fans.


« Glowacki vs. Vlasov & Briedis vs. Mikaelian this Sat. on DAZN

Robert ‘The Ghost’ Guerrero added to Wilder vs. Fury card on Dec.1 »