Robert ‘The Ghost’ Guerrero added to Wilder vs. Fury card on Dec.1 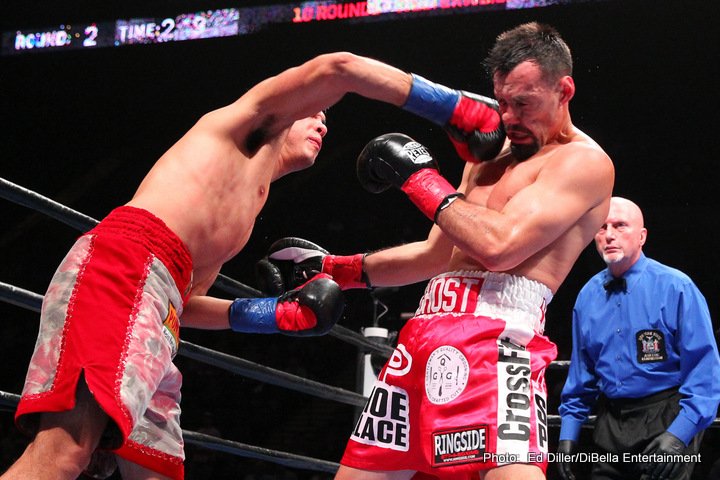 By Dan Ambrose: Robert ‘The Ghost’ Guerrero (33-6-1, 18 KOs) will be coming out of his short one-year retirement to fight a still to be determined opponent on the undercard of Deontay Wilder vs. Tyson Fury next month on December 1 on Showtime pay-per-view at the Stables Center in Los Angeles, California, according to Dan Rafael.

Guerrero has been in training for a month now for his comeback, according to ESPN. Guerrero is likely still capable of beating lower level opposition at welterweight, but not the quality fighters.

The 35-year-old former two division world champion Guerrero’s fight on the Wilder-Fury card will be off TV, which means he’s going to be facing a soft opponent. You can’t blame Guerrero for not fighting anyone talented, as he’s lost five out of his last seven fights, and he hasn’t fought in a year and a half.

During Guerrero’s 17-year pro career, he’s captured titles at 126 and 140. Guerrero’s decision to move up to 147 in 2012 for bigger paydays against Andre Berto and Floyd Mayweather Jr. was initially a profitable one, as he made good money. However, Guerrero’s career quickly went downhill after his one-sided 12 round unanimous decision loss to Mayweather in 2013. Guerrero made the mistake of standing and slugging with Japanese puncher Yoshihiro Kamegai in their fight in June 2014, and he had to struggle hard to earn a 12 round decision. Guerrero won, but he took a lot of punishment at the hands of Kamegai.

In Guerrero’s next fight against Keith ‘One Time’ Thurman in March 2015, he was beaten soundly by him in losing a 12 round unanimous decision. What was interesting about that fight was how Guerrero got the better of Thurman in the first four rounds when the Florida native stood in front of him and slugged. But after Thurman started to box, he controlled the fight with Guerrero in dominating rounds five through twelve.

Guerrero’s career turned sour after the Thurman fight, losing to Danny Garcia, David Emanuel Peralta and Omar Figueroa Jr. in three consecutive defeats. Guerrero was knocked out in just three rounds by former WBC lightweight champion Figueroa Jr. last year in getting knocked down five times in the fight. Two days after Guerrero’s loss to Figueroa, he retired from boxing. Figueroa Jr. hasn’t fought since his win over Guerrero due to hand problems.


« Tony Bellew: I’m NOT fighting Oleksandr Usyk for the Money