Glowacki vs. Vlasov & Briedis vs. Mikaelian this Sat. on DAZN 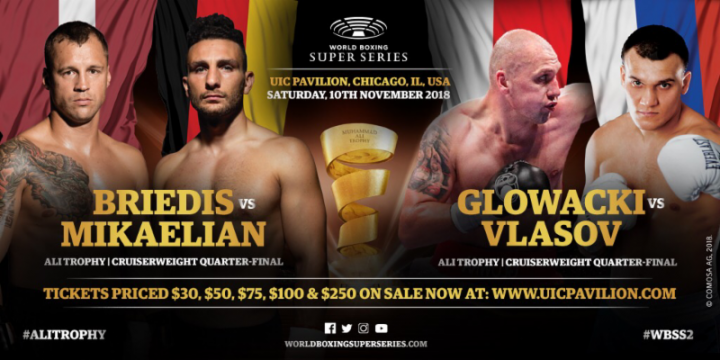 Briedis, 33, will be fighting Mikaelian for the WBC Diamond belt. This is another step forward for Briedis to come back from his loss Oleksandr Usyk last January in the final of WBSS 1 cruiserweight tournament. Briedis gave Usyk the toughest fight of the tourney and his career in losing a 12 round majority decision. Briedis gained more respect in that fight than he did in winning all of his past fights combined. Briedis came within an eyelash of beating Usyk.

In the end, Briedis didn’t have enough in his engine to get the decision. He was getting the better of Usyk in the first six rounds, but he emptied his tank and was fighting on fumes in the second part of the fight. It was especially bad for Briedis in the championship rounds in the 9th through the 12th. That’s when Usyk came on strong to get the decision. Still, the way that Briedis looked against Usyk, he’s going to be the one that likely comes out on top in the WBSS tournament. The only guy that has a chance of beating him is Yunier Dorticos, but he first needs to get past Andrew Tabiti in their semifinal fight in the WBSS tournament.

Vlasov, 32, hasn’t lost a fight in three years since his 10 round unanimous decision defeat at the hands of Gilberto ‘Zurdo’ Ramirez in January 2015. At the time, Ramirez took a lot of criticism from boxing fans for looking so bad against the Russian Vlasov, because they felt that he should have been able to beat him with ease. Little did the fans know that Vlasov was going to move up to cruiserweight and do extremely well in winning his last 12 fights. During that stretch, Vlasov has beaten some solid fighters in Olanrewaju Durodola, Rakhim Chakhkiev and Vikapita Meroro. Vlasov is now one of the best fighters in the cruiserweight division. He’s not the best, but he’s one of the best. If Vlasov can win the WBSS tournament, he’ll have shown that he’s ready to complete for the world cruiserweight titles once unified champion Usyk moves up in weight to heavyweight like he’s expected to do in 2019 after he faces WBC emeritus champion Tony Bellew this Saturday night in Manchester, England.

Glowacki, 32, has a four-fight winning streak going for him since losing to Oleksandr Usyk by a 12 round unanimous decision in September 2016 in Gdansk, Poland. Usyk did a good job of neutraliing the southpaw Glowacki’s punching power by staying on the outide, jabbing, throwing single pot shots, and moving around the ring. Usyk wasn’t stationary, and that kept Glowacki from being able to land his powerfil left hook that relies on to win his fights.

Since his loss to Usyk, Glowacki has won three out of his last four fights by knockouts. He has recent wins over Santander Silgado, Serhiy Radchenko, Leonardo Damian Bruzzese and Hizni Altunkaya. Glowacki has victories in the past against former WBO cruiserweight champion Marco Huck, Steve Cunningham, Thierry Karl, Nuri Seferi, Ismail Abdoul, Richard Hall and Varol Vekiloglu. The knock on Glowacki is his best victories have come against over-the-hill fighters in Marco Huck and Steve Cunningham. Glowacki didn’t beat a prime Huck or Cunningham. Even in the those fights, Glowacki struggled in the rounds in which he wasn’t able to knock Huck and Cunningham down. Glowacki knocked Cunningham down four times in their fight in April 2016, and yet he still won only by the scores 115-109, 115-109 and 116-108. That means that Glowacki was getting out-boxed and outworked in the rounds in which he wasn’t knocking Cunningham down. It was the same thing in Glowacki’s 11th round knockout win over Marco Huck in August 2015. Glowacki knocked Huck down four times in the fight, but he was still trailing on the scorecards by the scores 93-96, 94-95 and 93-96. Huck was getting the better of Glowacki despite having major problems with his right hook that he kept catching him with.

There’s a good chance that Glowacki will win the fight on Saturday, but you can’t count on Vlasov. He showed in his recent win over Durodola that he could neutralize his huge punching power. Durodola is just as powerful as Glowacki, but he just doesn’t have the southpaw fighting style that gives a lot of guys problems. If Vlasov is able to deal with the Glowacki’s right hook, then he’s got an excellent chance of defeating him in this fight.

“I know a lot about my opponent Krzysztof Glowacki,” Vlasov said. “I watched many of his fights. He is a difficult and dangerous boxer. He is a fighter who can shoot at any moment and one always need to watch him and stay focused. At this stage of my career, this fight against Glowacki is key. It’s either do or die,” Vlasov.

We’ve seen good things from both fighters recently, which makes this fight so hard to pick a winner. Glowacki has been looking powerful lately in knocking out most of the guys he’s faced since his loss to Usyk. However, those wins came against poor opposition. Vlasov has been fighting the better guys as of late in beating Olanrewaju Durodola and Vikapita Meroro.

“I’m not focused on him, really,” Glowacki. “I don’t care what he does, what he eat or whether he sleeps a lot. I’m mostly interested in myself and what I do, because I know that if I give everything, I’ll win.”

Glowacki needs to be very focused on Vlasov, because if he’s not, he’s going to lose this fight. Vlasov is capable of winning a lot of rounds in this fight. If Glowacki can’t hurt him, Vlasov will win this fight based on his superior workrate and boxing skills.

DAZN is offering one month free trial on their streaming service.


« Bellew: Usyk’s “four belts are coming home with me”